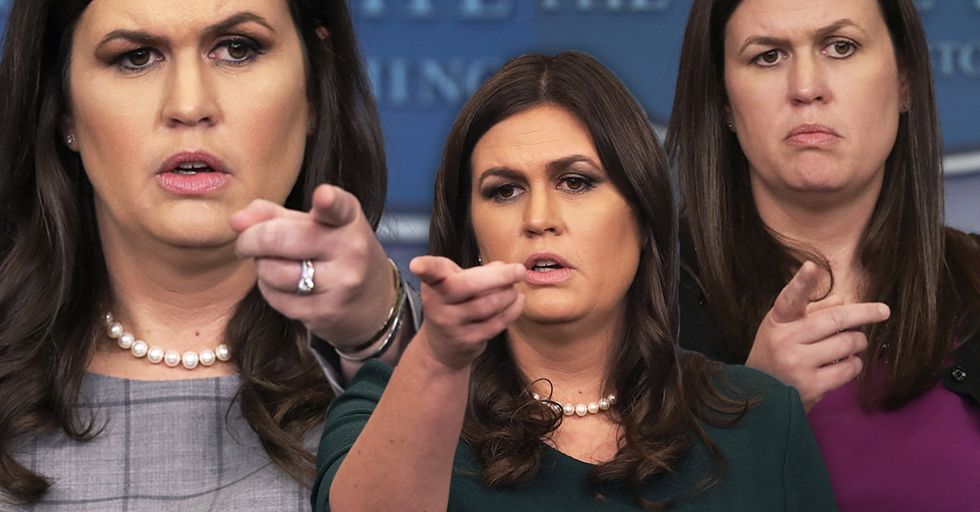 White House press secretary Sarah Huckabee Sanders, a woman who tells chilling lies with a straight face and uses hokey anecdotes about her children to deflect attention away from questions of national importance – *ahem* Russia! *ahem* – had an interesting exercise for reporters Monday before they began their press conference.

She asked them to say what they were grateful for.

"So this is how it’s going to work today, since I’m here and I get to call on you," she began, as if she were a kindergarten teacher.

Sarah Sanders asks reporters to say what they're thankful for before asking a question https://t.co/tRD8gLkTXJ
— Axios (@Axios)1511209668.0

"If you want to ask a question, I think it’s only fair, since I’ve shared what I’m thankful for, that you start off with what you’re thankful for. So, anybody want to be first on what they’re thankful for?"

She then said what she was thankful for. “Obviously, I'm clearly very thankful for all of you here in the room — I think that goes without saying," she said, to some wry chuckles from the gathered Press Corps.

Then she said, "In all seriousness, I'm thankful for my family, my faith, particularly thankful for the brave men and women of the military... the police, the firemen and first responders... the incredible privilege of serving this president and the American people." On the surface, this may seem like a nice, innocent gesture, but what about just truthfully answering the press' questions in the future instead of forcing them into a trite and uncomfortable situation?

For the most part, reporters played along. Probably because they, um, had to?

A few dutifully listed their families and their job. Many made rudimentary mentions of their jobs and colleagues, etc.

The snarkiest response, however, came from veteran reporter, April Ryan.

Ryan has butted heads with Trump's Press Secretaries before – notably Sean Spicer, who once talked down to her during a testy exchange on the Russian allegations – so she wasn't down with being treated like a child once more.

When Huckabee Sanders asked her what she was thankful for, Ryan gave her a thin smile.

When Ryan finished her response, Huckabee Sanders replied, “I feel the gratefulness there."

I'll play along: Hi @PressSec Sarah Huckabee Sanders, Aside from being thankful for my family, my followers, my f… https://t.co/YxWhMzjvZ0
— Ricky Davila (@Ricky Davila)1511211352.0

Ryan quickly rejoined, "I hope you felt the passion of my thankfulness." When Ryan tried to ask a second question, Huckabee Sanders quipped, "April, I’m starting to regret calling on you first." To this, Ryan replied, "You’re thankful for all of us. I’m part of the group." The holiday season is a joyous time, indeed.

Other reporters got into the game as well.

Cecilia Vega of ABC News said "I am thankful for the First Amendment," to which other reporters replied, "ooh, yes!"

As a reminder, the First Amendment protects freedom of the press, which Trump has been accused of curtailing.

The President has had a notably tense relationship with the Press, which he has termed "the enemy of the American people" and "among the worst people I've ever met."

One unnamed journalist went even further.

They said, “I’m grateful to have a job where I’m not treated like a child." Exactly.

Other journalists around the country got into the swing of things on Twitter.

"I'm thankful to have never sat through a White House press briefing where I was expected to say what I was thankful for," Angela GreilingKeane, deputy tech editor of Politico Pro said.

One journalist's response was most telling of all.

Zeke Miller of the Associated Press was definitely not about participating in the "exercise," so when he asked about Donald Trump's Supreme Court candidates, he did not say what he was thankful for at all.