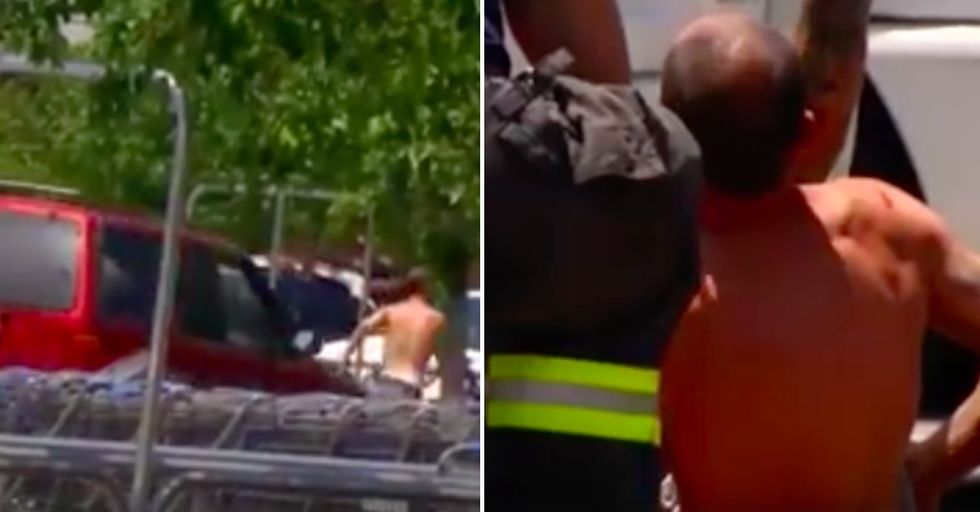 If you take nothing else away from this story, let it be that you shouldn't mess with a pregnant woman. Also, you shouldn't use your car as a weapon, but somehow those two things are related.

With that said, if you've ever had your purse or wallet stolen, you know what an epic pain in the butt it can be. Not only are you out cash and your purse/wallet, you have to cancel your credit cards, call your bank, get a new license, etc. It's so incredibly inconvenient that it might just drive you to, well, drive over the person who took your stuff.

She says she walked out of Walmart to find a man, later identified as Robert Raines, going through the belongings in her SUV. Disconcerting, to say the least. Infuriating, to say the most. Braswell says she tried to confront him, but he took off with her purse.

She tried to chase after him, but that wasn't working, so she got in her SUV and literally drove him down.

“I came back out here, and he was with my purse and took off," she said. "I took off after him. Me being five months pregnant, I chased a little ways then came back, jumped in the car, threw it in gear and came across the curb and ran him over. I was not letting him get away with it. It’s not right. It’s not fair."

Two witnesses helped Raines to the curb, where he was tended to by paramedics, and it's reported he suffered only minor injuries.

A witnesses backs up her story. “When I walked out of Walmart he had her purse and was pulling all of her stuff out and me and my friend told him to put it down, what are you doing?" she said. "She stopped and he ran off and she came up behind him and hit him with the car."

According to WBTV, Raines is being charged with breaking and entering, larceny, and damage to property.

Braswell is also being charged with misdemeanor assault with a deadly weapon.

You can check it out here for yourself:

When WBTV shared the video on Facebook, it got quite the reaction...

Most people thought that she shouldn't have been charged at all.

"He assaulted her fist when he took her purse. She was protecting herself by not letting the scum bag get away with it. Wither he got the purse from the car or off her its assault of her belongings or her. She defended herself and she gets charged were is wright in this one. He got what he was asking for he stole and got caught and paid a price and she should get a hand shake for defending herself," another person added.

"She doesn't need to be charged for protecting what was hers. People are tired of being taken advantage of. Get a job and quit stealing!" said someone else.

"Pregnancy hormones are nothing to be messed with! I once almost devoured a McDonalds employee for telling me impolitely the milk shake machine was broken," added another commenter.

But there was someone who thought she should be charged.

So what do you think? Does she deserve to be charged or not?