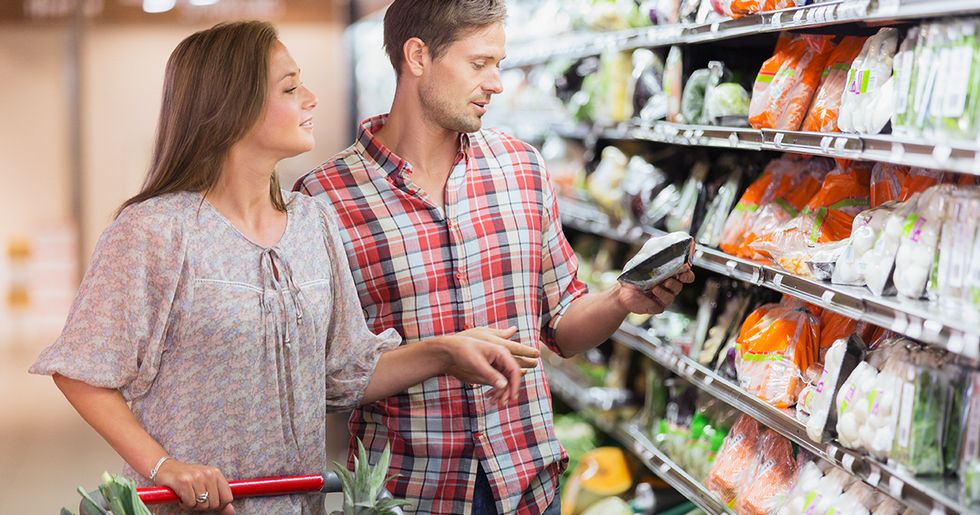 The older you get, the more you start to realize that you should prrrrrrobably be eating healthier.

As it turns out, your body can't really function on hot Cheetos and candy bars alone. (Trust me on this one.)

On the other hand, nobody wants to eat salad every single day of their life.

Not only that, but people tend to think that eating healthy foods costs way more than eating junk food. I'm here to tell you that doesn't have to be the case. Here are 19 ways you can eat healthier without spending all your hard-earned money on vegetables that are just going to sit in your refrigerator drawer.

Frozen vegetables have the same nutrients as fresh vegetables (sometimes even more!), and they are usually way cheaper. I'm talking ~$1 per bag. They're also super versatile. Heat them up and serve them as a side, with rice, in an omelet, or dump them in a cup of Ramen.

If you do buy fresh produce, try to avoid letting them go totally bad before you use them. For instance, don't toss your brown bananas! Use them to make banana bread! (You can also make zucchini bread for a slightly healthier option that still tastes good). Slightly mushy fruits still work great in smoothies, fruit leather, or salad dressings!

If you have the time, space, and desire, grow your own veggies at home! That could mean installing a raised bed in your backyard, using a few small pots on your patio, or even just putting a couple of tiny planters on your windowsill to use for herbs!

This one has been a serious game changer for me. Using online services might cost slightly more at the outset, but not actually being in the store can save you some bucks when it comes to impulse shopping. When you shop online, you're less likely to be drawn to a new flavor of Oreo cookie. If you don't want to pay for grocery delivery, there's another easy way to save money at the store.

And a grocery list! If you're going to do your shopping in person, you should always be armed with a list. Ideally, that list will contain things you need for the meals you've already planned and not much else. Don't give into impulse buys!

6. Buy extra produce when it's in season — then freeze it!

Fruits and veggies are cheaper when they're in season (duh), but if you buy extra and freeze it, you can enjoy them year-round without having to pay a premium. You can also stock up when things go on sale. Speaking of which...

Keep your eyes peeled for great sales on healthy foods. Stores usually publish a weekly ad — most of them these days even put them online, so you can look them up on your phone if you're on-the-go.

8. Get ingredients that do double duty

While doing your meal planning, you can save money by using one type of produce in multiple dishes. For instance, you could put sliced cucumber in a pita wrap and in a tuna salad for another day. This cuts down on waste and saves you money.

9. Stock up on frozen meals

Frozen meals are a godsend for nights that you're feeling unmotivated to cook — and they're much cheaper than ordering takeout! That being said, they're not super healthy, so you definitely shouldn't rely on them several times a week. If the idea of pre-cooked meals appeals to you, consider trying this next tip instead.

Meal prepping is one of the best ways to save money and time. It takes some motivation to actually cook and package everything up, but after spending one evening prepping, you're all set for the entire week.

More food for a lower overall price? Yes, please. Buying in bulk is particularly great for things like rice and other grains that have a long shelf life.

12. As long as you're actually going to eat the stuff

Don't fall into the trap of buying a bunch of something just because it seems like a good deal. If you're not going to actually eat it, it's a waste of money and space. Also, since we're focusing on eating healthy, don't buy snack foods in bulk! That's the exact opposite of what we're going for here.

They're cheap, they're delicious, and they're versatile as heck. You can add pretty much anything to rice and beans and have yourself a pretty enjoyable meal. They also have a shelf life of basically forever.

14. Store your grains in jars.

OK, I know this one may seem a little strange, but stick with me here. First of all, putting your grains (and legume!) in clear jars like the ones shown here means they're all up in your face, so you might be more likely to actually cook them instead of just letting them chill in the back of your cupboard. Also, jars are much easier to reseal than the plastic bags these foods usually come in. Plus, they look nice. This next tip is perfect for people who love fruits and veggies!

15. Get some fridge drawer liners

(Or some other device that extends the life of your fruits and veggies.) The longer they last, the longer you have to eat them!

Depending on where you live, prices at your local farmers market may be way better than what you find at the grocery store. And the produce is probably way better, too!

Unless you're buying something on the Dirty Dozen list, shelling out extra funds to buy organic produce probably isn't worth it. (Obviously, if you and your family choose to eat exclusively organic produce, that's totally fine. I'm just saying it's gonna cost you more.)

Listen, I know it's convenient to just grab a container of pre-chopped squash (or whatever) off the shelf, but it's usually not worth it. You're paying extra for the convenience (and the plastic packaging!); not for the food itself.

19. Check out other grocery stores

Especially Asian and Hispanic food markets, if you're lucky enough to have them in your area. They typically carry the same produce for much lower prices. They might also have new kinds of produce you've never tried before! Share this with someone who's trying to keep both their budget and themselves in good shape!