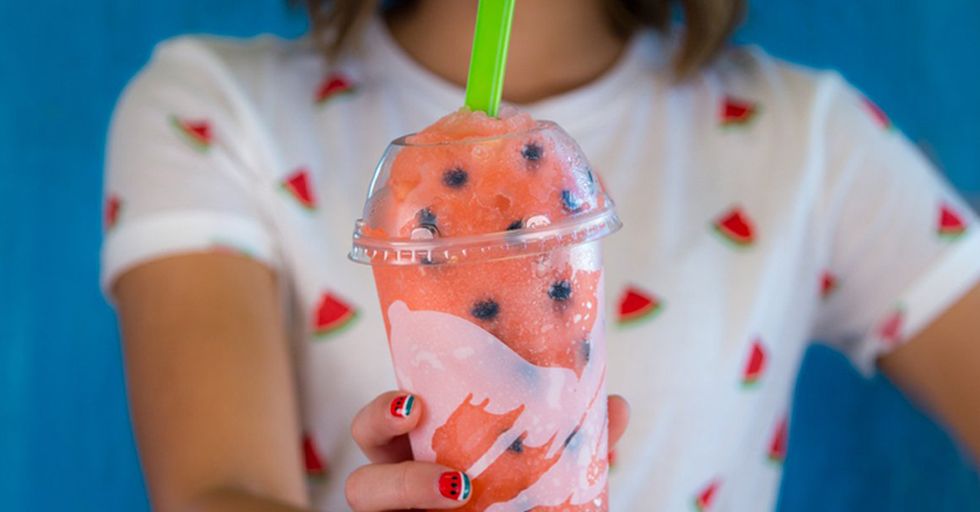 The answer to most all of your cravings at any time of day is usually solved by just heading to your nearest Taco Bell; they are always there to fill you up without breaking your wallet. Now that summer is just around the corner, we need to know that our sweaty summer nights can be satisfied with the rush of going through the Taco Bell drive-thru.

The fast food gods have heard us and Taco Bell recently announced that they will be reintroducing their Watermelon Freeze with crunchy candy seeds that tie that perfect sugar ribbon on top of our ideal fast food sweet treat option. The reviews are in and people are very excited about the new frozen item on the menu.

Who cares about getting a summer body when you could get a new Watermelon Freeze? Bikini bodies are overrated anyways. It's all about that Taco Bell menu and their beloved Happier Hour deals.

How often do you crave Taco Bell?

If you're a normal person, it's at least once a day. Or more if you're addicted.

You just can't get enough of their food.

Maybe it's not the most genuine Mexican food out there, but you can't deny that it's usually the best option at 2 am when nothing else is open.

There's something for everyone.

Are you a nacho kind of person? You got it. What about a cheesy enchilada or bean and cheese burrito? You better believe Taco Bell can provide for all of your cravings.

Clearly, people have a strong devotion to the Bell.

Most college students wouldn't have survived if it weren't for their famous fourth meal that tastes amazing anytime after midnight.

Don't bother lying to yourself.

Everyone craves Taco Bell, so don't bother pretending you don't, it's not even worth the time.

Maybe you tried to give it up, but it justs keeps coming back for you. Don't fight it anymore, just let it happen.

If your diet has been defeated by a Taco Bell run, we promise you aren't the only one.

Don't get me started on the Baja Blast Freeze.

The Mountain Dew Baja Blast Freeze has been a crowd favorite since it was permanently added to the Taco Bell menu in 2013.

People get really excited about this drink.

It's one of the best items on the menu, and during the summer, it's even more popular.

Taco Bell listens to its fans.

Recently, Taco Bell added a sugar-free Baja Blast for all of you who are still attempting to get their summer body.

Now they really wanted to treat us.

Although Taco Bell has added other new items to their menu, their latest addition has people very excited, and we can see why.

Get ready for your watermelon dreams to come true.

Taco Bell is reintroducing the Watermelon Freeze that has candy seeds inside it. Must. Contain. Excitement.

It's going to be the taste of the summer.

Watermelon is already the best fruit during the summertime, so to be able to get it in a slushy form just feels too good to be true.

The best part is the seeds.

That's something that is usually never true, but in this case, Taco Bell wanted to prove the world wrong.

It's the cherry on top.

The seeds are actually made of a crunchy candy that is totally edible. It was a great addition to make the watermelon slushy even more like the fruit we all love.

Look at this beauty!

The seeds are not only aesthetically pleasing to the brightly colored slushy, but they are also a fun crunchy texture to the icy drink.

Don't let your little ones have it.

Taco Bell warns that the seeds might be a choking hazard for children, so consume with caution.

The real meaning behind summer lovin'.

I'm preparing myself to have a real summer obsession, and it seems like most Taco Bell fans are on the same page.

Someone deserves a promotion.

@tacobell Finally! I died inside when this was removed from the menu. Promote whoever thought it was a good idea to bring it back.
— Taylor Jade 💚 (@Taylor Jade 💚)1555389070.0

Whoever is the watermelon warrior who fought for this to come back is a true champion. Not all heroes wear capes.

Okay not everyone has to cry over this news to prove you're excited but you are entitled to your own response!

Get your hands on one.

Some people jumped into the car as fast as they could to get their hands on one and they were not disappointed at all.

That watermelon glow looks great in the sunshine. Plus, the giant green straw resembles a Boba tea drink, so you can really inhale all those seeds.

You can get a little creative.

What do you bring to the pool? A corona? #gamechanger #watermelonfreeze #thegooseisloose https://t.co/QfWfhzkLHJ
— Bradley Parker (@Bradley Parker)1529163016.0

One guy had a pretty good idea to spike his slushy, so if that's your summer vibe, go right on ahead!

Jeffree Star did a little PR.

"I didn't think anything could top the pink Starburst flavor, but girl, they topped it," the makeup guru exclaimed in his YouTube video.

Other online influencers were excited about the announcement which really caught the attention of their followers.

It's not going to break the bank.

It's a little high on the calorie count.

A regular sized Watermelon Freeze has 220 calories per serving while the large has 270 calories. No one said good things in life come without a cost. It seems like this is one that's worth the calories.

The Happier Hour at Taco Bell is between 2 pm and 5 pm daily and you can purchase any regular drink or Freeze, including the Watermelon Freeze, for just $1.

Grab your friends, it's time to get a drink.

It will only be at Taco Bell for a limited time, so don't waste any time. Life is too short to not have a few (or more than a few) Watermelon Freezes.

Go ahead and start embracing the summer vibes. Share the good news with your fellow Taco Bell lovers and get your hands on a Watermelon Freeze!