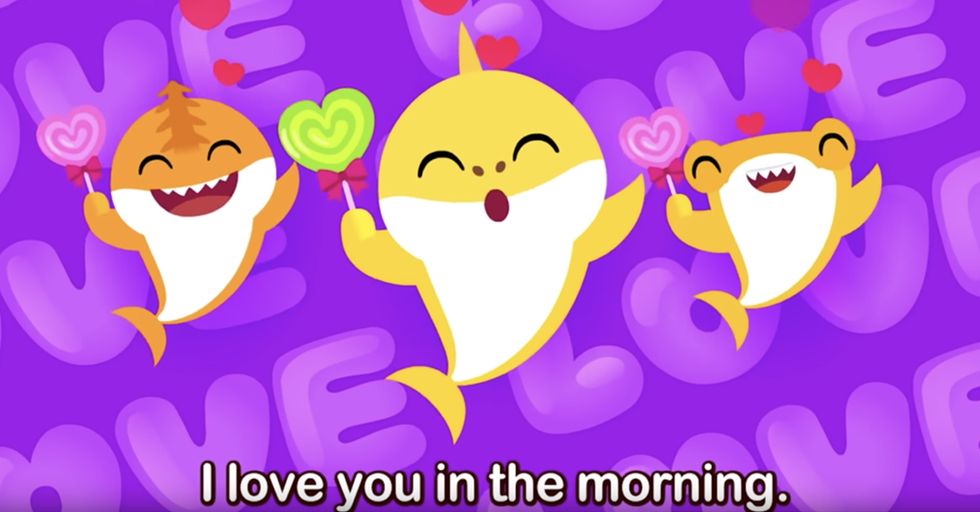 Here's Another Baby Shark Song That Will Never Leave Your Head

Even if you aren't a parent, there's a very good chance that you're aware of the "Baby Shark" song. You know the one. With its haunting "doo doo doo doo doo" and impossible-to-forget melody, it's the sang that has haunted so many of our dreams. It's even worse if you don't have a child – why would this children's song be stuck in our heads?!

Because it's evil, that's why.

Okay, maybe it's not evil, but it is insanely catchy and it takes forever to get out of your head. You'll wake up singing it all week, and go to bed with the classic, "Baby shark doo doo doo doo doo" in your head. It takes over, people!

And now you have something to be thrilled abut – there's now a Valentine's Day version of "Baby Shark" and it's just as impossible to get out of your head.

It all started with the "Baby Shark" song.

No wonder kids are obsessed with the video – with its bright colors and repetitive lyrics, it's practically hypnotic.

"Baby Shark" is a phenomenon.

It's viral brilliance. Kids are obsessed with it and it's consistently ruining parents' lives.

Despite being an internet song, it has sat nicely in the Top 40 of Billboard's Top 100.

It also hit the UK's Top 40. It is literally taking the world by storm.

So why another "Baby Shark" song?

Because the world can't get enough! Why not?!

The Valentine's Day "Baby Shark" version is just as addicting.

Okay, but why is it actually so sweet? PINKFONG KNOWS EXACTLY WHAT THEY ARE DOING.

As is to be expected, the internet has a LOT of opinions about "Baby Shark."

And would we expect anything less? Absolutely not. This is the internet we're talking about. Intense opinions run wild!

No truer words were ever spoken.

This song will haunt you for no less than 28 years. Rest assured, you will never get it out of your head.

Is "Baby Shark" going to be our next president?

It certainly seems that way... Would you vote for "Baby Shark?"

It's taking over entire schools!

The poor grown-ups in this video. You can see the cries for help in their eyes.

Yes, it's that serious. "Baby Shark" is no laughing matter!

Which song would you rather listen to for the rest of eternity?

This is just evil.

I want to meet a person who has never heard the song baby shark, shake their hand in admiration then sing it to the… https://t.co/lZtEVDSslX
— Busy Bissing (@Busy Bissing)1540744572.0

But also, let's bring everyone down with us. It's not fair that there are people out there who have never heard the "Baby Shark" song.

How to judge your own parenting skills...

You actually win parenting if you don’t lose your mind whilst listening to the Baby Shark song on repeat.
— Mommy Owl (@Mommy Owl)1539878637.0

If you don't lose your mind while listening to this song, you are basically an avenger amongst parents. The rest of us mere mortals are not worthy.

A full 14% of my time is just watching my kids and their friends run around the house blasting #BabyShark
— Elizabeth Banks (@Elizabeth Banks)1547085596.0

If the rich and the famous can't escape "Baby Shark," who can? None of us are safe.

When strangers start to notice the song, you know that's when it's really taken over the world. But hey, at least we're all in this together?

I love that this person calls their child, "the brat."

Also, as a non-parent, I am fascinated by the kiddie music world. There's so much of it out there.

Probably not the best way to try and get people to join your community.

They played baby shark as part of the show at our church's trunk or treat, so I'm guessing we'll be seeing a decrea… https://t.co/MRBP1bmi3w
— InnerMomalogues (@InnerMomalogues)1541031228.0

In fact, it's probably a great way to send people away.

We're all at risk to the powers of "Baby Shark." It doesn't just sink its meat-hooks on children. None of us are safe.

There is no rest when it comes to "Baby Shark."

If this song is playing in your house, chances are that you will get no rest.

Which is more intense – a teething baby or "Baby Shark" on repeat? They're probably tied.

A karaoke machine that ONLY plays "Baby Shark?" This is a child's dream and a parent's nightmare.

Only the very few brave ones make it to this level.

It's an elite level of parenting, that's for sure. Not many grow to love "Baby Shark." (Although, as previously stated, it actually is weirdly sweet.)

Parents are the toughest people out there.

I’m thinking people who claim a song on the radio is overplayed after hearing twice in the same hour have probably… https://t.co/2XTiuztd10
— TwinzerDad (@TwinzerDad)1544835841.0

Not only are they raising the future, but they are doing it while having an insanely annoying song stuck in their head. We must never take parents for granted.

This would be a very interesting opening to a movie.

The opening scene in Blade except it’s my kids with a bottle of syrup dancing to the techno remix of Baby Shark.
— MotherPlaylist (@MotherPlaylist)1540669905.0

Hollywood, are you listening? Make this happen.

This about sums parenthood up.

Interviewer: What’s the best and worst parts about being a parent? Best: Receiving unconditional love from a perso… https://t.co/RUSikyuPJR
— Toni Hammer (@Toni Hammer)1539617444.0

Everything in life has pros and cons. "Baby Shark" can be a pro or a con, depending on how you feel about songs that never leave your brain.

This is oddly beautiful?

Who knew a viral song for children could change all of our lives so much? What a world we live in.

The addiction is real! Somebody should check on our children, right?

Everyone listening to "Baby Shark."

In the end, none of us are safe from "Baby Shark."

This song will conquer all. Share this with your friend who can't get "Baby Shark" out of their head!