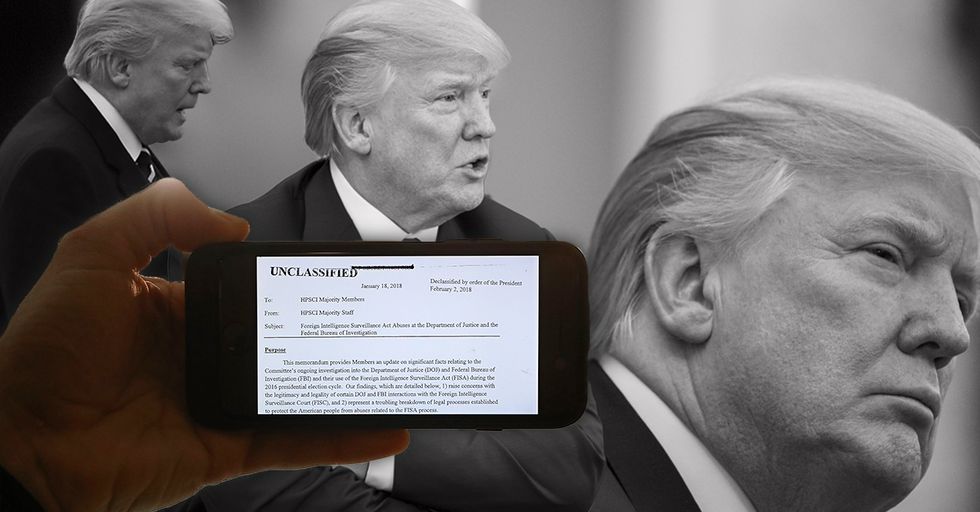 Full disclosure, I once got into law school – a pretty good one too – so I'm

Truth is, I'm one of the least legally qualified people ever. What I do, however, have is lots of experience reading very dense and obscure texts, which is why I am perfectly qualified to break down the Trump memo for your general enlightenment.

In early January 2017, the US intelligence community publicly confirmed what many had suspected – Russia had interfered in the 2016 elections, and Vladimir Putin himself had personally ordered the "influence campaign."
Capitol Hill was in an uproar, and it got even worse when Buzzfeed released the Steele Dossier, a document compiled by the (very stereotypically-named) British spy Christopher Steele. Yes, that's really his name.

The Steele Dossier supported the allegations that the Trump campaign and Russia had colluded to steal the presidential election, but it was a revelatory document all round. Why, you ask?
Because it also revealed that Trump enjoyed engaging in very esoteric kinks – i.e., he liked getting peed on. (In recent months, we've also learned that Trump is fan of being spanked by very specific Forbes magazine issues, so our president is a man of vast and varied tastes.)
In any event, things were starting to get heated in Washington, and all eyes were on then-FBI Director James Comey – you remember Comey, the guy who disclosed that the FBI was looking into Clinton's emails 11 days before the election. Comey was, at the time, investigating the collusion claims, and there were rumors something was cooking. In response, Trump soon fired him.
The Trump Administration first explained this decision by saying they were concerned about Comey's handling of the Clinton emails, but then Trump admitted on freaking national television that it was "this Russia thing" that sealed the deal.
This decision, of course, led to the appointment of Robert Mueller as the Special Counsel to the Russia investigation, which in turn brings us where we are today – the release of the fated memo, which alleges that the FBI and the Department of Justice are biased against Trump.
The memo, which was sponsored by House Intelligence Committee Chairman Devin Nunes, R-Calif. (over the objections of the Democratic Party), alleges that the FBI overstepped its "surveillance authorities" when it targeted a foreign policy adviser to the Trump campaign, Carter Page.

Page, by the way, is the attention-seeking pro-Russia Trump campaign advisor who's prone to saying things like this:

The actions by the Clinton regime and their associates may be among the most extreme examples of human rights violations observed during any election in U.S. history since Dr. Martin Luther King Jr. was similarly targeted for his antiwar views in the 1960s.

In any event, Page first attracted the interest of the FBI because of his numerous trips to Russia. The FBI and the Department of Justice then sent a request to the Foreign Intelligence Surveillance Act (FISA) Court so they could surveil Page, which is where it starts getting complicated.
While the memo doesn't accuse the DOJ or FBI of wrongdoing, it states that FISA's approval of this request is problematic since the DOJ and the FBI used the Steele Dossier as justification for the request. Furthermore, Republicans cite, as part of their objection, the fact that the Dossier is not only unverified, it was paid for, in part, by the Democratic National Committee and Hillary Clinton's campaign lawyer.
To be specific, the memo says that it details findings which, "raise concerns with the legitimacy and legality of certain [Justice Department] and FBI interactions with the Foreign Intelligence Surveillance Court."
Furthermore, these findings, the memo states, "represent a troubling breakdown of legal processes established to protect the American people from abuses related to the FISA process." It's all very complicated and confusing, but...
There's a couple of things wrong with this scenario, the first and most important being that the facts presented in the document don't tell the whole story (which, again was why the Democrats wanted to release their own memo combating it).
For instance, while the DOJ and the FBI used the Steele Dossier partly to justify surveillance on Carter Page, this surveillance was renewed THREE more times. This is important because the law requires a "separate finding of probable cause " for each renewal. (Basically, this means that you can't actually use the same justification you used to start surveilling the person in the first place.)
The document itself acknowledges this:

The FBI and DOJ obtained one initial FISA warrant targeting Carter Page and three FISA renewals from the FISC. As required by statute 50 U.S.C. a FISA order on an American citizen must be renewed by the ISC every 90 days and each renewal requires a separate finding of probable cause.

That's not the only problem with the memo, however. The memo was supposed to prove beyond the shadow of a doubt that the Steele Dossier, an unverified source, spurred the Russian collusion investigations.
Instead, it proves that George Papadopoulos, the same guy who pled guilty to lying to the FBI about Russia "triggered" the opening of the investigation when he sidled up to an Australian diplomat in London and told him that Russia had offered the Trump campaign dirt on Hillary Clinton.
Only time will show the fall-out from the memo, but here's what you really need to know. Several sources speculate that the whole thing is geared towards discrediting Deputy Attorney General Rod Rosenstein, one of the people who signed the application for surveillance, as well as Andrew McCabe, the Deputy FBI Director who has already resigned. The sources say Trump wants to replace Rosenstein with "someone who could impede the FBI investigation into Russian election meddling."
Here's the thing – it's all good and well that Trump wants to play dirty politics, but to attempt to discredit his OWN Department of Justice as well as the FBI, institutions filled with people that HE appointed – well, that just says there's blood in the water and the sharks, they are a-circling.