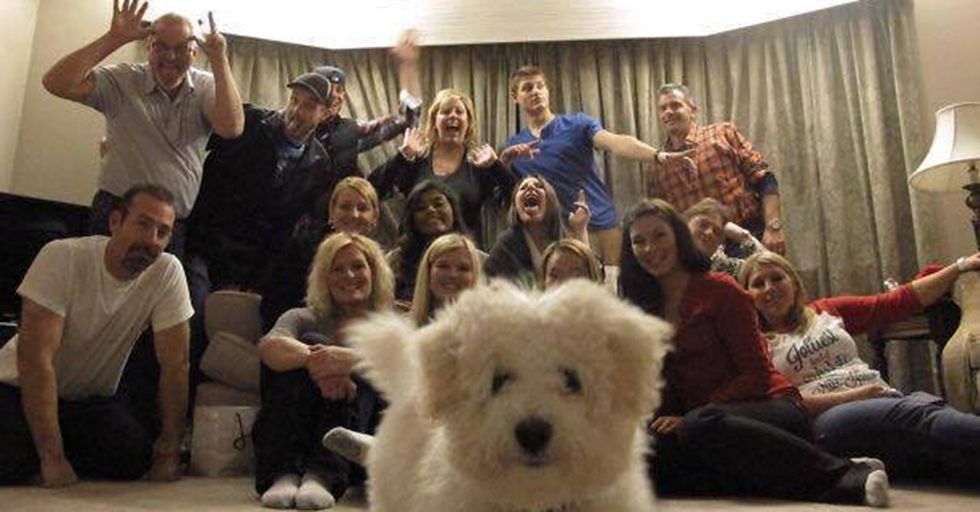 You can't blame a dog for screwing up a picture. I mean, you CAN, but you really shouldn't. They don't know how these things work. But even if they did, the end results of puppy photobombs are way too cute to complain about.

Take a look at how these clueless dogs actually made this photos way better.

I think this pup might be more excited about the impending nuptials than the couple is. I hope the dog calms down by the wedding day.

It doesn't really seem like the people know what's going on, but this dog is ready for its close-up. Or scared of its close-up. It's hard to tell which.

In case the groom-to-be gets cold feet, that Golden is happy to pick up the slack. Look at him, showing the dude what to do AND providing moral support.

Well, hello there! Can I help you with something?

I'm not sure what this passenger was trying to get a photo of, but it's clear what they ended up getting—a big close-up of a sad-looking and cute pup.

I normally don't trust tiny dogs as much as big ones (THEY'RE ALWAYS PLOTTING!), but I'm especially suspect of this one. What's going through that dog's head?

Well, isn't this the cutest thing you'll see all day?

(Yes. It is. No questions asked.) I hope they didn't even bother to retake the photo. This one is perfect just the way it is. In fact, you could probably Photoshop out the people to make it even better.

Leader of the pack.

That dog probably has a lot going through its head right now. So you can understand why it's not too concerned with the dozen or so humans behind it who were expecting an unobstructed photo.

I have to say, I would be alarmed if I saw an infant with ears like that, but it wouldn't take long for me to warm up to the visual. Look at that cute kid with the perky ears!

I guess the kids here needed an education on the birds and the bees sooner or later. It's just a little surprising that they're getting it courtesy of two pet dogs.

It's all about perspective.

The kid's already making the perfect face, and they don't even realize it. I can't tell if the dad's happy because he doesn't know, or because he got the perfect shot. I'm guessing the latter!

They're also perfectly capable of photobombing other dogs as well. This one was all ready for its close-up when dog #2 came careening in from below, resulting in this epic shot.

One man's pride is another animal's smelly, weird looking...thing. This dog's expression is priceless, and many of us who aren't experts in the outdoors can certainly relate.