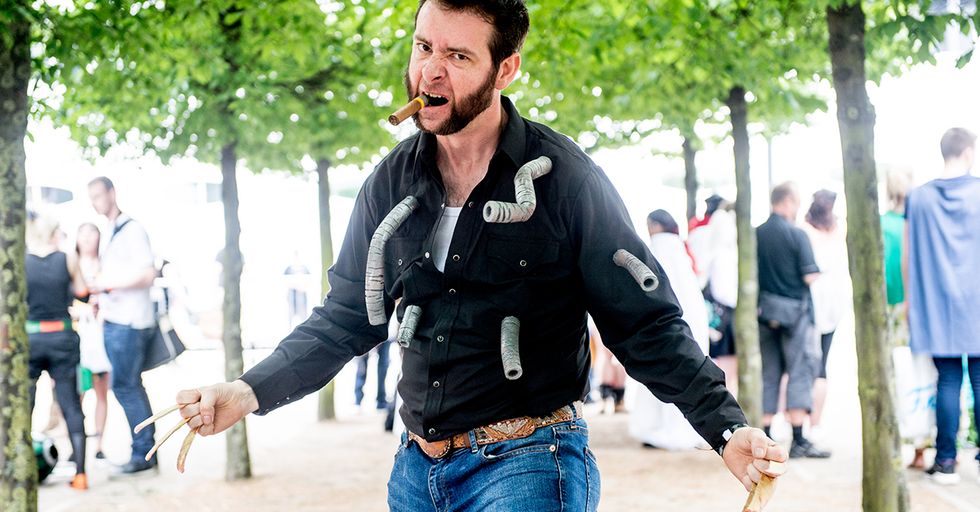 There are people who go all out on cosplay and end up looking exactly like the characters they're portraying.

And then there's this guy.

The guy behind Lowcost Cosplay puts together some massively impressive getups of your favorite characters.

But he does it all with stuff he has lying around the house. Objects that you wouldn't necessarily think would make sense to use when making these costumes. But that's what makes these all the more impressive.

This just goes to show you: A bunch of bananas can make a great hairdo. Like, legendary.

It turns out that imitation crab meat is also really effective imitation face muscles. Who would have thought?

The use of the negative here is clever beyond belief! Not to mention a banana, this time the peel, coming to the rescue once again!

Giant Pickle Rick has CDs for eyes and a sandal for a mouth. The next one gets the hair spot on...

It's kind of amazing that carrot hair wasn't used to depict Carrot Top, but this actually works insanely well too.

A tape beard isn't quite as luxurious as Jason Momoa's legendary locks, but that fork is oddly accurate so this gets an A+.

Captain America should really take a cue from this guy and commit to the blue hair. Then he wouldn't have to worry about always putting his mask on.

It is a little scary how well an iron stands in for the ship. In other news, there was room on the door. Rose could have saved him.

Let's just hope that wasn't a permanent marker. The next one leaves me with a lot of questions...

This might be the most accurate costume of the whole bunch and it's just some noodles.

I wish that Logan had actually dyed his hair pink though. That would have made for quite the visual.

This is definitely the most terrifying cosplay on the list and I'm sorry, but this picture will almost certainly haunt your dreams tonight and forever and always.

Using an actual butt to achieve a cleft chin is a stroke of genius. It's kind of weird how perfectly this works. The next one will make you go green in the face...

To be honest, the pulling of the ears doesn't quite achieve the same effect. But it was a noble effort nonetheless, and quite a commitment with all that green paint.

For some reason, using crocs to make Jason's mask just makes him that much creepier. What kind of straight psycho would do that.

Even if he didn't have the companion picture of the actual character, I would definitely get what he was going for. I'm not sure what that says about hot dogs...or me.

This is what happens when someone says, "Dress up as Hello Kitty right now but you cannot leave this bathroom and must use only what you can find."