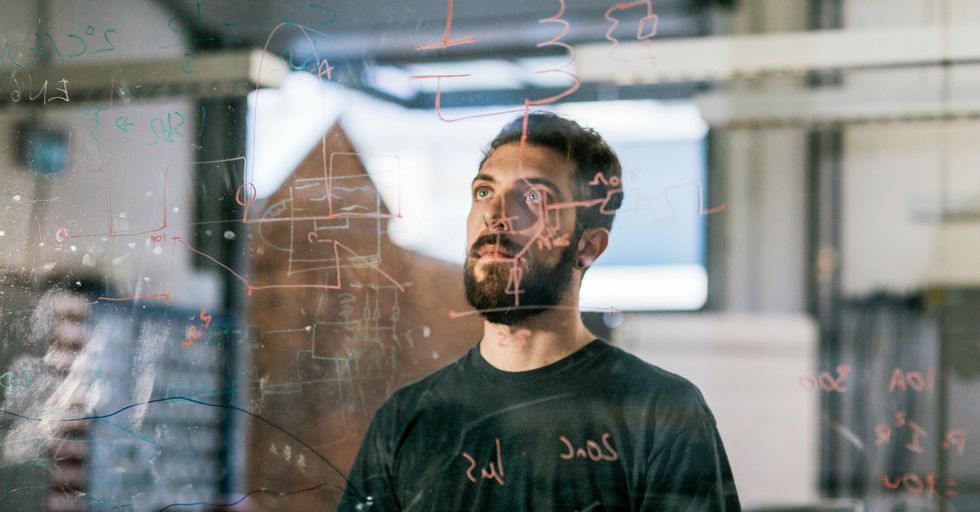 An unlikely thing has gone viral: a math problem! But it's not your average math problem, as it seems to completely defy logic. People were outraged and confused. Where did it come from, and for the love of all things holy, WHY? Incredibly, there is an actual explanation for it, and it was discovered on Twitter.

If there's one thing that's universally loved by all, it's math word problems.

Especially if they involve multiple letters representing mysterious numbers, lots of symbols, and apparent nonsense. The great thing about these algebraic brain teasers is that they make you feel smart, competent, and able to solve any riddle. OK, just kidding. Math is like pineapple on pizza. A few weirdos like it, but most of us could go a lifetime without it.

This math problem is making the rounds online, and confounding everyone.

If it takes an orchestra of 120 players 40 minutes to play Beethoven's 9th Symphony, how long would it take 60 players to play it? Easy, that's, um, wait. As Twitter user @dmataconis points out, this isn't how things work.

People were not happy about this logic problem that seems to defy all logic.

Don't mess with us, math. Are you trying to trick us? No one likes to be made a fool of.

Some people had it all figured out.

Obviously, everything gets divided in half. Beethoven's 4.5 Symphony — his most underappreciated piece. In a world of algebraic confusion, all things are at once possible and impossible.

Why did this math problem capture our collective attention more than any other math problem that came before?

If only our high school math teachers were half as captivating as this problem on Twitter! Oh right, it must be the trendy combo of math and classical music. The people do love a good mashup!

Some people seemed offended by the illogic of the question.

Since the question clearly doesn't make sense, why does it exist? How did this problem come to pass? What is happening?!

People seemed to think that there was an explanation. It can't just be that this question is stupid, can it?

Is someone being funny here? People uncomfortably balanced their outrage with the desire to be in on the joke that they could almost tell existed.

Of course, there were smart answers. There always are.

@dmataconis This is a management question -- the correct response is the more people involved, the longer it takes.
— Matt Laszuk (@Matt Laszuk)1507657303.0

Add more people and obviously it takes longer. It may defy reason, but clearly reason has been thrown out the window here. It's time to think outside the box, circle back to this, put a pin in it, or escalate it up the ladder.

And then, out of the storm of frustration and smart-assery, an explanation began to emerge.

A logic trap question? We've never heard that phrase but it sounds like a thing. We bet it is a thing. Finally, the person who actually wrote the math problem came through with a full explanation...

The problem was originally written by UK math genius Claire Longmoor a decade ago!

Longmoor included it as a trick question among a worksheet of real questions designed to illustrate direct and inverse proportion. How this worksheet was obtained by the internet at large is still a mystery. But at least we know why this confounding question exists.

Take a bow, Claire Longmoor. You've done what no math-phile has ever done in the history of ever: gotten people talking about math.

It's weird little stories like this that makes the internet the wonderfully entertaining madhouse that it is.