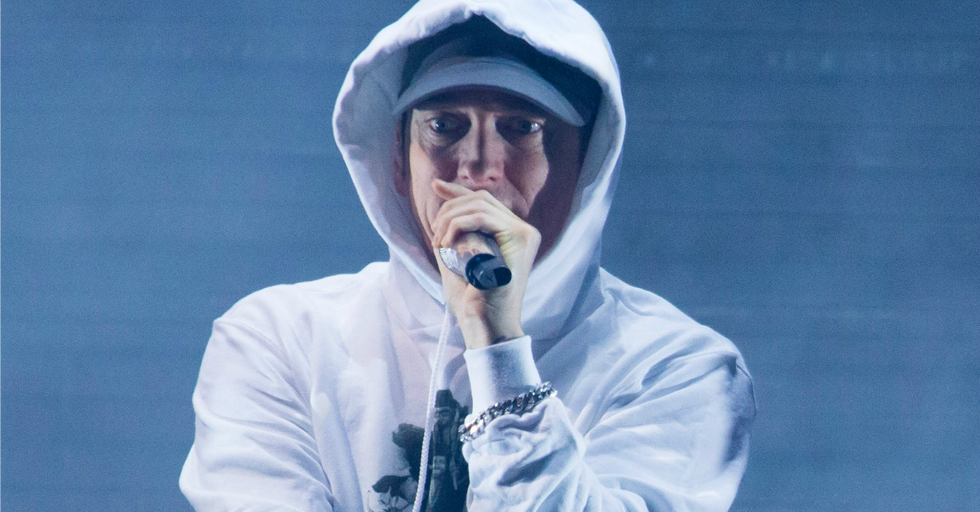 Well hot damn, Eminem is back.

In a nearly five-minute freestyle rap video that aired during the BET awards on Tuesday night, the Detroit rapper exploded on Donald Trump and his supporters, describing the incumbent as a "kamikaze that'll probably cause a nuclear war," and adding that "racism is the only thing he's fantastic for."

Eminem also made sure to give praise to President Obama, rapping "But we better give Obama props." But then he started in on Trump and the alt right movement, paying special attention to his own fans in the alt right ranks.

Surrounded by other Detroit rappers and notables including Kid Vishis and Royce Da 5'9", Eminem laid waste to the Republican President and his supporters, pointing out Trump's hypocrisy and cowardice as he rapped, "And while the drama [of the nuclear holocaust] pops / and he waits for s*** to quiet down / he'll just gas his plane up and fly around / till the bombing stops." The rapper also mentioned Puerto Rico, the Mexico wall, the Las Vegas shootings, and Trump's ill-advised tax plan, as well as the Charlottesville protests and Trump's implicit endorsement of the alt-right marchers. He also touched on Colin Kaepernick and the NFL protests, rapping, "Now if you're a black athlete / you're a spoilt little brat for trying to use your platform or your stature / to try to give those a voice who don't have one." Most importantly, Eminem did not spare any fans of his that were Trump supporters. While other artists have been cagey about supporting the alt-right and white supremacist movements, Eminem pulled no punches. In a heated ending to a volcanic freestyle, he spat, "And any fan of mine who's a supporter of his / I'm drawing in the sand a line / You're either for or against / And if you can't decide who you like more and you're split / On who you should stand beside / I'll do it for you with this." The video already has half a million views and is quickly building steam. We can't help but wonder how Trump will react when he sees it. More to the point, how will Trump supporters react now that a prominent white artist is calling out the President. We're guessing that it's probably with none of the virulence they have confronted Colin Kaepernick and Jemele Hill, but either way, it won't matter – Eminem is ready for them. As he noted halfway through his rap, "F*** walking on eggshells / I came to stomp."