We Just Found out How ‘Black Mirror’ Got Its Name and Honestly, We're Reeling | 22 Words 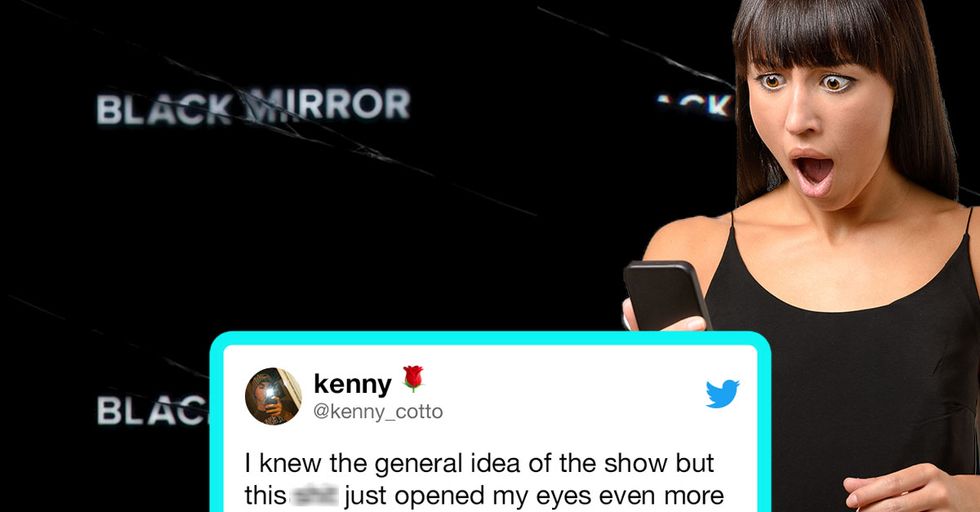 We Just Found out How ‘Black Mirror’ Got Its Name and Honestly, We're Reeling

Black Mirror has often (and rightly) been praised for the dystopian terror it instills in its viewers. Sure, the "San Junipero" episode was lovely and optimistic, but the rest of the show pretty much explores how technology is going to destroy us someday if we're not careful.

And for such an ominous show, Black Mirror is the perfect title. It's dark and scary and reflective, much like the show itself. But what does it actually mean? Does it refer to something specific? Well, turns out it totally does! Many people are just learning about why Black Mirror is called Black Mirror, and it's messing with their minds. Big time.

If you're anything like me, you've gleefully marathoned Black Mirror without ever really stopping to think about what the title could actually mean.

It seemed appropriately foreboding and induced enough tension that you just sort of accepted it. Sure, it made sense that since the series explored how technology transforms our lives in a theoretically near-future, it could be seen as holding up a mirror to society. And what reflects back is often pessimistic, threatening, black, if you will. So there you go, BOOM! Black Mirror.

But that's not the whole story. There's something very specific that the term "black mirror" references, and the show's creator Charlie Brooker explained it in this video (which, to be fair, was released in 2014):

Aaaand there it is. Yeah. Wow, right? Black Mirror refers to the literal black mirror that is your darkened phone or computer or tablet screen.

The explanation makes sense. It might not have been obvious to you at the start. In fact, you might feel a little bit dumb for not realizing it. It's nothing worth losing your head over, though.

But what is the Internet if not a place for people to lose their heads?

As you might have been able to predict, when word of the real story behind the title of Black Mirror got out (albeit four years late), the Internet went bonkers...

People just could not believe the magnitude of their own disbelief when they finally discovered what the title meant.

With the discovery, it's like a whole world of understanding opened up for some people.

It's not just the literal black mirror that Black Mirror references, it's also the aforementioned figurative reflection of the darkest effects our obsession with technology can have. The layers, the nuance — it's too much to handle!

Apparently, the reference to a phone's black mirror in the title of the show was always common knowledge to the Brits for whom Black Mirror originally aired.

We Americans might be a bit behind the ball when it comes to British exports, that's true. Don't tell me there's a hidden secret meaning to The Great British Bake Off though. I don't think I could handle it.

If you think about it, watching people learn about the true meaning of Black Mirror is a bit like watching the Prime Minister pork a pig on national television.

Quite uncomfortable, kind of maybe a little bit funny, and just a skosh upsetting to the core of your humanity.

Now that we all know the real meaning of Black Mirror, one this is certain.

We'll all be fine. As long as we take a good hard look at ourselves in that black mirror every time we power down our phones, we got nothing to worry about. Right?