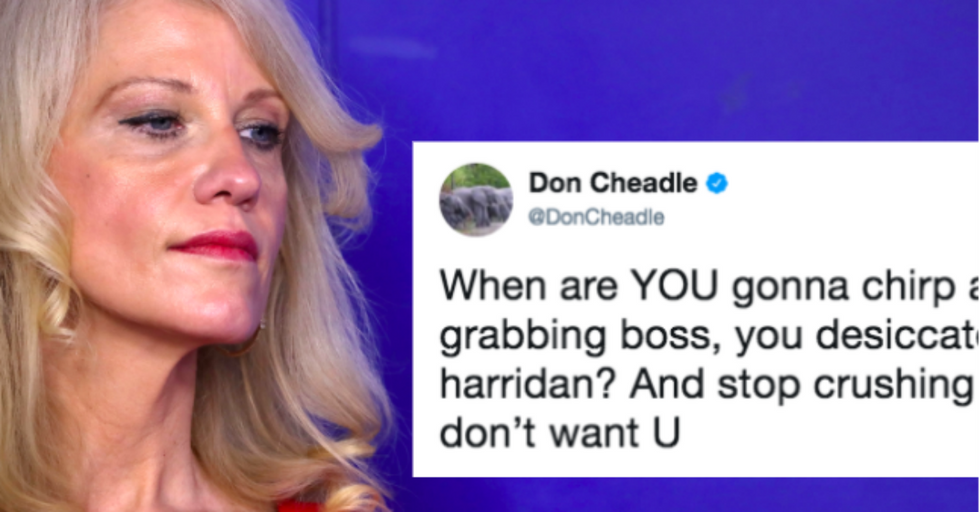 Her latest tweet following the reports of Harvey Weinstein's sexual assault is one of those things.

His epic clap back is loaded with juicy words, and the best part is, they're all used to insult Kellyanne Conway.

Kellyanne Conway used the allegations against Harvey Weinstein of years of sexual harassment and abuse to attack Hillary Clinton (not the president). We would expect nothing more from the woman who's still defending Donald Trump's every move.

The terrifying subtext of this tweet, of course, is that Republicans are secretly ecstatic that Weinstein is a member of the "liberal elite" and they can use these horrific allegations not to bring to light the systemic problem of sexual assault but to blast Hillary Clinton, even though, she is — say it with me — not the president and not even an active politician.

Don Cheadle had quite a few words for Conway following that horrendous tweet, and they are pretty epic:

Ouch! First, Cheadle brings up a great point, one all-too-looked-over by Trump supporters for reaming Hillary out for taking a few days to make a statement about Weinstein: Donald Trump has a string of sexual assault allegations against him. He is an alleged rapist. He has bragged about grabbing women on camera. And yet people like Kellyanne Conway won't say anything against him.

Desiccated (dried up)! Duplicitous (deceitful)! Harridan (hag)! Those are some mighty good words, man. Then, Cheadle accused Conway of "crushing on Hillary." She really is obsessed to an unhealthy degree with this woman, and Hillary isn't even close to driving the world into nuclear war. Might be time to shift focus and blame, Kellyanne.