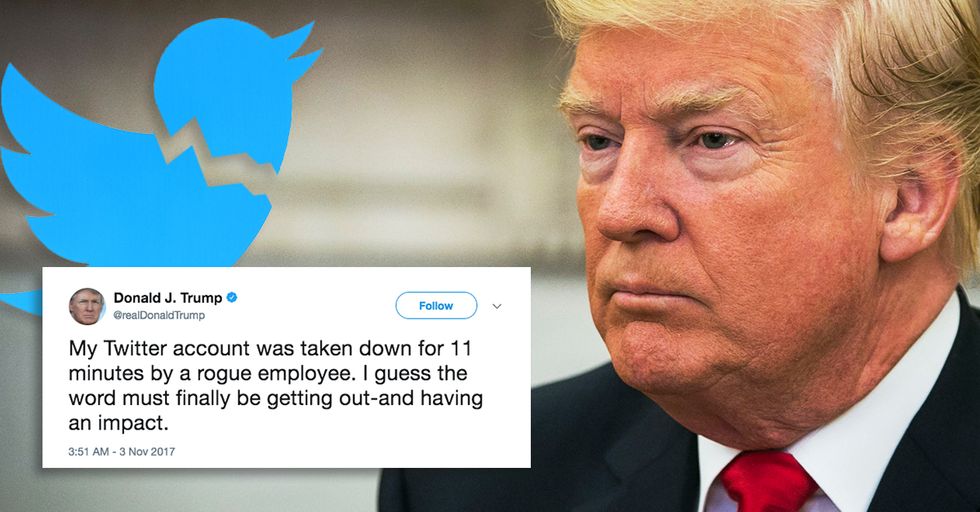 Way back in the day, when we were still innocently asking, "How could things get any worse?" — one whole month ago on November 2 — Donald Trump's Twitter account was deactivated for 11 precious minutes. It was a brief reprieve from the constant pitter-patter of evil that we were dealing with, and the whole country breathed a sigh of temporary relief.

The person behind the deactivation has now come forward and revealed exactly why he did what he did.

Can't get enough of it. We'd venture to say it's his favorite website. Donald Trump has used Twitter on multitudinous occasions to spread lies and conspiracy theories, incite hate, and defend the indefensible.

And so, on November 2, someone decided that they'd had enough, and they deactivated the president's Twitter account.

While the account was back up within minutes, it took less time than that for people to take to the streets (of Twitter) and hail whoever did it as a true hero.

Through our investigation we have learned that this was done by a Twitter customer support employee who did this on… https://t.co/19oVsYAN2t
— TwitterGov (@TwitterGov)1509674428.0

But after a couple hours of investigation, Twitter reported that Trump's account was actually deleted by a Twitter employee on their last day on the job, one who presumably wanted to go out with a bang!

Of course, Donald Trump did what he always does in times when he feels victimized — he took to Twitter.

Trump called out the "rogue" Twitter employee who took his account down and made everyone's dreams come true for a short while.

While the identity of the Twitter hero remained a mystery, that didn't stop practically all of Twitter from hailing this person as the second coming of Jesus.

There have been many theories floating about as to who this hero could be — did they get fired and decide to flip the table on their way out? Did they sneakily hack the system and calmly exit the building right before it exploded in chaos behind them? No one knew. But now, the truth is out...

He's a German citizen with a Turkish background who was working for Twitter in customer support on a work and study visa. Duysak sat down in an interview with TechCrunch to talk about what happened that day.

It was part of Duysak's job to go through reports of abuse and offensive behavior on Twitter, and during his last shift, someone reported Trump's account for this type of behavior.

Without really taking into account what could happen, Duysak set in motion the process to deactivate the page belonging to Donald Trump, the President of the United States.

"I didn't hack anyone, I didn't do anything which I wasn't authorized to do," Duysak said.

"I didn't go to any site or tool where I wasn't supposed to be at. I didn't do any crime, and I underline that I complied with all rules." Duysak said he never really thought the account would actually get deactivated. It's a process for something like that to happen, and Twitter's policy of protecting tweets that are considered newsworthy, should have in theory protected Trump's account from actually getting deactivated.

You can watch the whole video below. Twitter hasn't made his name public, so why did Duysak decide to reveal himself now?

All right, Mr. Duysak. We get it. "Coincidence," wink, wink.

When asked, he said, "I don't deserve to be nominated for the Nobel Peace Prize." He said he's not interested in a career in tech and would like to move into working in finances. "But I love Twitter, and I love America." America loves you too, Bahtiyar Duysak. America loves you too.