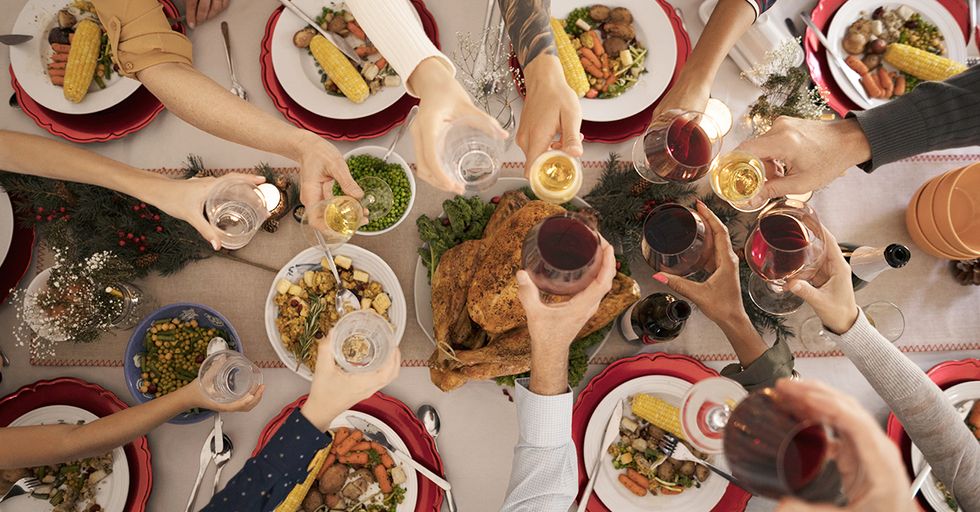 I'm sure we can all attest to having a weird family. But there are some families out there, who operate in a much stranger way than you'd think. While most of us intentionally try to keep these family quirks hidden, there are many characteristics we might've assumed were normal until we grew up. But, now we realize that these odd quirks and traditions we once held are not so normal. And the rest of the world realized that too.

So we took to one of the weirdest places on the internet to find out where everyone else's family sits on the weirdness scale. Reddit let us into a long thread of family traditions, anything from having a secret family whistle that gets used in public places to odd holiday traditions to pubic butt slapping and using weird accents.

Yeah, you might want to buckle up for this because it gets pretty weird.

One, happy, normal family. But let's be real, this isn't real. Not at all.

Now that we've established that no one's family is normal we get into that weird, deep, dark abyss of family traditions.

For quite a while, my large family found it highly entertaining to playfully slap each others' butts. We decided that fair warning was in order so that we had a chance of evading. This consisted of clapping twice... We started just randomly clapping twice without a clear shot, hoping the other person would forget about it by the time we had a chance...By then, we'd clap just to watch our siblings jump. Endless entertainment.

Well, no judgment. If your family slaps each others' butts for entertainment, then that's that.

We always get each other cards for holidays and birthdays, but we make them the stupidest or most unrelated card possible. Like my mom gave me a card for my 18th birthday that was all about how she was proud of the strong black man that I had become...I'm white. My mom had gallbladder surgery and my brother and I got her a bunch of 'It's a girl!' balloons. Lots of confused nurses asking us if we were looking for the maternity ward.

Okay, that's a good one.

I would definitely jump on board for that kind of tradition. Bat Mitzvah cards for every Valentine's Day? That sounds pretty hilarious.

My brother and I were born in Scotland but immigrated to Canada at a young age. Neither of us has an accent like our parents, but over time we have learned to imitate to perfection. Any time we are joking with my parents, mocking them or asking for something we use thick Scottish accents and slang. Also talk to our dog STRICTLY with an accent. -LilFray

Whenever we drop someone off at their house at night, we have them flicker on and off the front porch light to signal they are okay (in case of an intruder). -Consice

I might take this one up with my friends and family. You can never be too safe! Nothing more adorable than making sure your loved ones are home safely.

Once my younger sister stopped believing in Santa (around 15 years ago) my parents starting making our Christmas presents from dogs that we knew - our dog, our cousin's dog, our neighbor's dog. I think on this particular Christmas Eve, Mum and Dad were delirious and thought it would be funny, and it has stuck. My parents now have 3 chickens and they do all our Christmas shopping each year, apparently.

More reason to love dogs! As if there wasn't enough already.

Jeopardy every night. We always set it to record because sometimes we don’t have time to watch it when it airs. Now we don’t give the answer in the form of a question or keep score, it’s not that extreme, but the person that gets final jeopardy gets high fives. When I’m away at school my mom texts me the final jeopardy question so I still get to play a little when I’m away. -scooberdoober2

What is, the smartest, quirkiest family?

A family who does trivia together stays together.

When more guests arrive than expected, mom uses a secret code for me and dad, that is- FHB (Family Hold Back). This is done so that we eat less, and the extra unexpected guests don't run out of food.

This is so smart and so kind! My personal secret code when I go to parties is DHB (Don't Hold Back) so I can eat all the food I want. Maybe I can learn from these people.

Can you repeat that?

About 25 percent of my family has hearing loss, and can’t hear certain frequencies. So we are always yelling at each other. -ooo-ooo-oooyea

A family of singers

Any time it is someone's birthday we purposefully sing as badly as we can. It is hilarious. My mom usually ends up aggressively coughing because she thinks that is funnier than singing. -udamndirtyape

This tradition sounds a little scary.

This family probably doesn't go out too much.

I could see how this would be awkward

Your first sleepover was probably quite shocking for you and for everyone.

At Christmas, we sniff the presents before opening them. I don’t know why and most of the time they just smell like wrapping paper. It’s been going on for over 20 years now. -dahlsy

That's a lot of sniffing!

20 years of smelling your presents? What a commitment. Your family is for sure a little odd, but I love it.

Until I was 23 I thought Tupperware was called 'Mctainers' instead of containers. My parents still have never justified why they have always only called them that to the point I still slip up and call them Mctainers regularly. -walterthegreyhound

No rhyme or reason

Families usually have their own language and make up their own words. Weird, but adorable.

This is just between my mother and myself, but every time I get the hiccups, she buys them from me. I’ll start hiccuping and she makes a big fuss and throws up her arms. "I suppose you want cash for those, huh?" She’ll give me whatever spare change she can find in increasing amounts until I stop hiccuping. Usually, I’ll make about 50¢, but one time I got $6 because she only had bills. She’s the best.

Okay, I've definitely never heard of anything like this. You could make some serious cash if you faked the hiccups. Was I the only one who thought that or am I just a terrible person?

We regularly adopt stupid/funny autocorrects/typos into our lexicon. Mom tried to type "okie-dokie" once and it turned into "poker dome," so now we'll occasionally say 'poker dome' as a sort of 'I understand/yes/alright'. -Gengyo

Those family group chats can get pretty weird and even more weird when everyone makes up their own words.

We have a distinct whistle to locate ourselves in places like stores or supermarkets. Mostly useful when we're traveling outside the country and have no phone service. -fendelianer

I need this for me and my friends when we get lost in public places, which happens more than I'd like to admit. It's like a role call system. Unless you can't whistle then this could be a problem.

We have a family tradition where if you make eye contact with someone while you are eating corn on the cob, you must finish eating that corn without looking away, blinking, or swallowing. It usually ends in corn being spewed, but it’s plenty fun. -YukeWolf

I wonder how often this family eats corn. Is this a daily side for your meals? Or is this only on special occasions? So many questions.

While on the phone, instead of saying "bye," we say "buh" or some variation. Not sure why we always have and people look at me weird when I’m on the phone with my mom and say "alright love you! buh." -nasty-otter

To whoever is in this family, I found your theme song.

A weird family with even weirder cats.

We have 6 cats and we pretend they have human lives and jobs and we pick favorites. My dad's cat is a country singer and my cat is a lumberjack. -Nightstalker117

Well, I've never heard of this before. Maybe this one is better kept a family secret.

After reading these, it makes me feel a little better about my family weirdness. We aren't the only freaks in the world, and for that, I am grateful.

Tell one, tell all of the weird tales of different families. It makes the world seem more normal. Share this with your friends or family members who you know just have weird traditions!