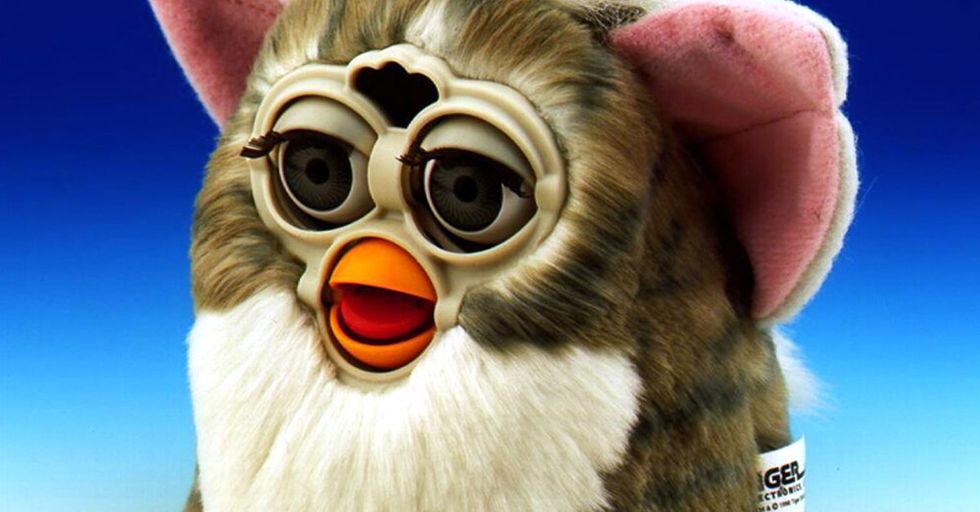 34 Weird Childhood Toys That Will Give You Major Nostalgia

Warning: serious throwback moments are ahead.

Our favorite childhood toys, although seemingly normal and playful when we were children, are a little weird through the eyes our now adult eyes.

These toys were anything from Aqua Sand to Moon Shoes to Betty Spaghetti dolls and they were the best part of our lives and got us through the stressful spelling tests.

It's amazing what we used to love as kids and it's even more amazing to look back on these toys and laugh at how weird some of them were.

My fingers can almost feel the sand as I type this. Its amazing colors, how it can hold its shape and stay so firm then be so easily smashed to nothing; Moon Sand truly felt like it was not from Earth. It brought back the whole "playing in the sandbox" thing that our parents used to talk about.

Another magical sand experience! Who knew sand could have so many uses and be so mesmerizing. Aqua Sand defied the rules of science by being both a liquid and a solid. As a kid, I never questioned it, I just took accepted that it was magic and I was lucky to be able to play with it.

If I were a parent, I would hate if my kid played with this toy. This thing is creepy AF because it literally pees and poops like a real baby. You had to keep buying diapers for this thing! AND its eyes would open and close like a real baby. Nostalgia can also leave you with a really creepy feeling. I'm happy to leave this toy in the past.

Another science defying toy. It was a mix between blowing bubbles and playing with real balloons. Bubbles that never pop was a kids dream. With so many colors, it was one of the cheapest gifts that produced some of the greatest smiles.

Sea Monkeys are back and bringing with them plenty of nostalgia! Do you remember them from your childhood?… https://t.co/HZk1cx3cGq
— Bandai UK (@Bandai UK)1524268836.0

These weird little creatures amazed kids all over the world. They came to life right when you gave them water. Then they just swam around and did little tricks! It was pretty amazing. If your kid couldn't handle a fish right away, you got them sea monkeys because it required a lot less maintenance. The next toy is another "just add water" and if you didn't have them as a kid, you might not have been considered cool.

These colorful capsules grew in water and turned into spongey little creatures! I remember the dinosaur pack was the coolest, but you could also get sea creatures or farm animals. It was pretty fun to watch them grow but then not so fun to play with a bunch of little sponges.

I have a love/hate relationship with these guys. So cute, right? All fuzzy and colorful. But then they start talking and blinking and I start thinking of Gremlins and I want to chuck that thing against a wall. As a kid, it was mostly all love though. Furbies were definitely the most popular toy.

Boy, oh boy, do I miss these things. You could find me walking around the mall with my HitClips jamming to N*SYNC pretending I was in a music video. These were so dang cool and only played the best music. Gosh, I miss the early 2000s.

It's about to get lit. These little pegs brought light to your life and you instantly became an artist. There was just an endless amount of joy with Lite Brites because it felt like everything you made was ten times more awesome when it lit up.

The original Flutterbye Fairies had a string that you had to pull to make them fly, but now the new ones just have a button that you press and the fairy flies on its own. Easier, yes, but not as cool. Flutterbye Fairies were awesome, until they got stuck in your hair or flew into your fireplace. Both were common occurrences. The next toy may have been the genesis of Mastechef Junior. If you know, you know.

Okay so maybe the food that you made tasted like crap, but this was the easily one of the coolest toys to ever exist. A tiny oven for tiny little chefs? How freaking cute is that!

This was a toy I'm sure parents liked because it got the kids out of the house. It's making me sweat just look at it. It was like hopscotch and jump rope all in once. Plus, you could see how many skips you got and make it a competition between friends (or enemies) on the playground.

Is your Tamagotchi still alive? I bet there is a graveyard of our past Tamagotchis that we forgot to feed. I know kids that cared more for their Tamagotchis than they did their own friends.

I can hear the girls screaming at their brothers for chasing them in the backyard with these jacked up squirt guns. A Super Soaker was no joke, these toys were powerful and could blow the sunscreen right off your body. The next time might bring up some bad memories. Click next to find out if you fell victim to

When you couldn't get a really puppy for Christmas, you got a Poo-Chi. These robot dogs walked and barked like a real dog. Not as easy to cuddle with as a real pooch, but still fun. Plus, when you got annoyed of it, you could just turn it off. The next toy might bring up some bad memories but hopefully you look back and laugh.

If I knew cuss words as a kid, I would have used them while playing this game. Mouse Trap took some serious time to set up because there were so many little pieces and once it got started, it was all giggles and smiles until it gets serious and can ruin friendships.

Polly Pocket was my best friend. I'm sure if I looked through my childhood stuff, I could still find a few of her tiny little accessories.

This was the most advanced technology of our time. When you linked up your Pixel Chix with your friends, then your Pixel Chix became Pixel besties and there was so much more fun to go around.

The closest thing I'll ever have to living out my astronaut fantasies as a kid. Moon Shoes were those bouncy, trampoline sneakers that made walking seem like the most exciting thing in the whole world.

A softened punch to the face from your siblings is what you could expect from Socker Boppers. They were fun for a second until you got a right hook from your big brother. The next toy was something I kept on me at all times and if it was found today, my reputation might be ruined.

The best way to keep secrets when you were a kid was to type it out and lock it up in the Dear Diary toy. You could use a super secret password to keep it hidden from your siblings or friends at school. Pretty advanced stuff here.

To me, these were the only non-creepy baby dolls for little kids to play with. Their hair was made of yarn and they had the cutest rosy cheeks. They just felt so cuddly and kind. Everyone loves a Cabbage Patch Kid.

Guaranteed to make you almost throw up in daycare, the Sit n Spin is a plastic wonderland of dizziness and giggles. This is definitely a toy you can outgrow because I think the most it can hold is 40 pounds.

This could keep kids entertained for hours. It was basically your own personal slideshow. Then you could buy more little film reels and have so much to look at and flip through.

Can you hear it? The repetitive voice yelling orders at you while you desperately try to twist, bop, pull or pass it? That voice still haunts me today. If the next one doesn't throw you back down memory lane, then I'm not sure what will.

Here's a blast from the past! Did you play with Lincoln Logs as a kid? #throwbackthursday #lincolnlogs #kids… https://t.co/jcv8c08olQ
— CNST Alpharetta (@CNST Alpharetta)1524150001.0

It felt like the only thing to build with Lincoln Logs that made sense was a cabin, but these were still a favorite among kids. They were also much less painful if you stepped on one than Legos.

This is how you know you made it as a child; a Gameboy Color. It was the ultimate sign of coolness and it was easy to impress everyone in class if you pulled one out of your rolly backpack. The colored screen was a luxury that brought so much more excitement to your gaming experience.

The movie Home Alone made this toy super famous. If you were a sneaky little brother, you probably owned one of these to threaten your big sisters. It was a great toy and an even greater weapon.

A cute and creepy teddy bear that read you stories and blinked a lot, which now that I think about it, feels a little unnecessary.

Etch-a-Sketches were the original iPads for kids. It was so satisfying to shake that thing and watch my sad attempts at art just disappear. I couldn't even spell my own name on an Etch-a-Sketch, how the heck do people make stuff like this?! Up next, a toy with little meaning, but great hair.

Wait, what was the point of these things again? The bright, colorful hair and cute little jewel bellybuttons couldn't hide the fact that they were literally trolls.

I miss my Doodle Bear. You could write or draw on your bear, which was normally never allowed, and then just toss it in the washing machine and start all over! It was like getting a new teddy bear every day.

You couldn't have just one. Beanie Babies were a growing addiction for children. It was more of something to collect than something to play with and you were always on the hunt for rare and unique Beanie Babies.

First of all, epic name for a toy. Second of all, bendy arms and removable heads? Way cooler than a Barbie doll.
It's okay that nostalgia completely washed over you while reading this. Share these memories on Facebook with your sandbox buddies so they can reminisce on the good old days.