This Weird New Emoji Has People Questioning Everything | 22 Words 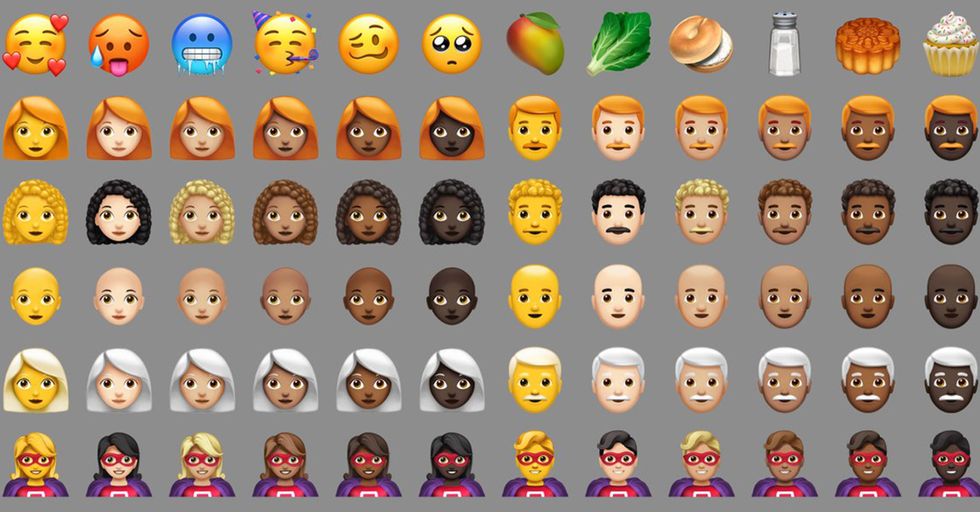 This Weird New Emoji Has People Questioning Everything

Attention: We have new emojis! Assuming you have a smartphone, you're most likely familiar with emojis. Whether you use them sparingly or pepper every single text message and status update with a variety of them, you've undoubtedly come across these little expressions hundreds of times.

Most of the emojis have a pretty straightforward understanding. A smiley face communicates that you're happy. The grimace face indicates that you find something awkward or cringeworthy. The eggplant is just an eggplant, and definitely not anything else.

Plenty of people complain about emojis, saying that they're a sign that people are getting dumber. Personally, I think emojis are a fun example of how language is constantly evolving. And many linguists are taking them more seriously than you might think. In fact, in 2015, the Oxford Dictionaries Word of the Year was the "Face with Tears of Joy" emoji!

Plus, they're just dang cute.

Most of them are, anyway. But there's a new emoji in town that is more confusing than adorable and it's driving the Internet nuts.

It's one of the smiley face emojis.

I know. They're some of the most useful emojis of all! But don't worry, we're going to figure this out together.

As you may already know, Apple recently rolled out new emojis.

It added redheads, bald people, and a sponge! Because obviously, you can't go through life without a sponge emoji.

They also added this guy:

It's officially known as a "face with uneven eyes and wavy mouth," but it also goes by "woozy face." Needless to say, the woozy face emoji took the Internet by storm.

What's this guy's story? Why is he woozy? In what context are you supposed to use him?

Because it's the Internet, theories started rushing in.

OK, I can see the eyebrow action here, but the face in this Neil Patrick Harris GIF is entirely too stagnant for it to be the inspiration for the woozy face emoji.

Is it a Dwight emoji? Now that I've seen this GIF in action, I'm having a hard time believing it could be anything else.

But we still have more theories to unpack.

It could be Popeye! Or, rather Popeye after a few too many cans of spinach.

Maybe it's for use in this particular situation:

Although, if you've stubbed your pinky toe on something in the middle of the night, you're probably too busy crying to text anyone about it.

The emoji reminded some people of this sensation:

You have to admit, it does look like he's pretty happy about something.

Or maybe it's this:

Honestly, it doesn't matter if this was the intention behind the woozy face emoji. It will absolutely be used for farts.

It could also be a baby who just tasted something sour (?):

The eyebrows are there, and the mouth, too! I think this theory is plausible!

I mean, they already have a poo emoji. It was only a matter of time before they developed its opposite.

"What? That was the answer? I had no idea! I'm so surprised by this knowledge but am also happy to have learned something new. Better contort my face into this horrible grimace!"

Or maybe the emoji recently came back from the dentist:

@Emojipedia @carlie_zinder what my face was like after that dentist appointment
— jesse (@jesse)1541278101.0

Been there, done that. I don't recommend it!

Is he about to sneeze?

You could text your friends about how the Santa Ana winds got you like :woozy face emoji: They would understand and not be confused at all.

You can't hear most emojis, but you can definitely hear what the woozy face would sound like. It's condescending, right?

Or maybe Apple is working on a brand deal:

What's the correct response for Pepto Bismol? Flattered? Confused? Ah, well. Just slap a woozy face emoji in there. It can mean anything, apparently.

Everyone knows there was one kid who pulled this exact face in every school picture. (And if you think you don't know that kid, it might just be you.)

I don't know anything about this woozy fellow, but I do know that I'd keep my distance from him if we were ever at the same place.

I think this is another tick in the "Pepto Bismol" column. Take a deep breath, woozy friend. You got this.

You could also use the emoji in this nefarious way:

Although it'd probably only work once. Use it wisely.

This is perfect. I'm frequently texting other people about Jason Alexander and this particular face that he makes. Thanks for making it easier, Apple!

Or, if you're a bit of a lightweight.

I mean, they're calling it "woozy face." Alcohol certainly does make people woozy.

This one's too real:

This How dudes faces look when they try being sexy by biting their lips for a profile picture https://t.co/Xjtb9fgtlr
— Ramon G (@Ramon G)1541069263.0

In case it wasn't obvious from this tweet, that's not a particularly good look, guys. Maybe you should stop making it?

Never mind. It's totally a burp.

How could I have missed it?! Mr. Woozy is actually Mr. Burpy.

Did you think we were done with the bathroom humor?

We were not. Come on, this is the Internet.

Maybe he's trying to hold in something else!

Yeah, laughter! That could be it. (It probably isn't. But it could be!)

I relate to this one on a personal level:

Now that I think about it, that is exactly the face I make when I touch wet sink food. And I also feel woozy when it happens!

Is it a good face or a bad face? I need to know. Do you have your own theories about when to use the woozy face emoji? Let us know in the comments! Don't forget to share these theories with your friend who's obsessed with emojis!