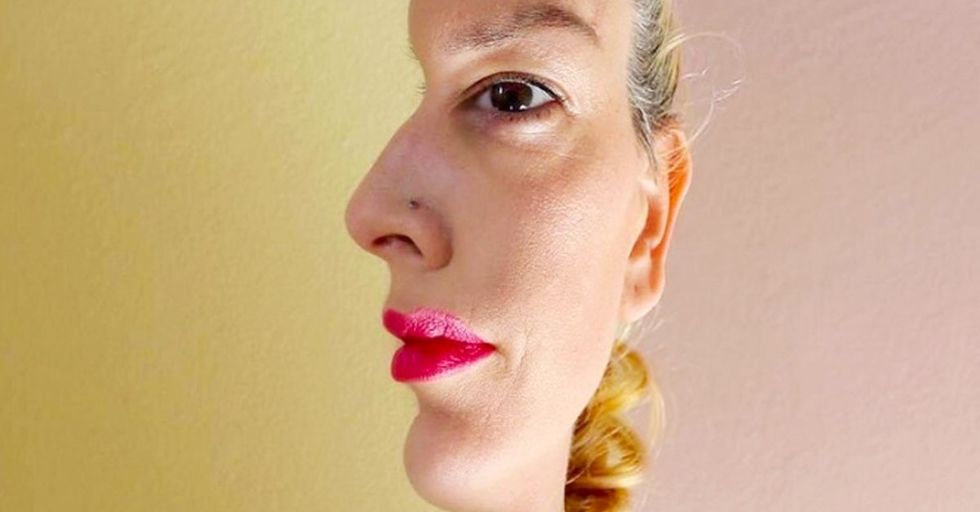 They're weird, they're wonderful, and the only thing that's certain is that they will make you laugh.

Some may make you do a double take...

Others are just kind of unnerving. Either way, we guarantee you'll giggle at at least one of these fine photos. Go ahead, try not to.

His gloves fit over the human hands that are definitely underneath. We're just heating up, folks.

This woman with no legs

It honestly took me way longer than it should have to realize that she's probably sitting on the ledge. I was simultaneously proud and ashamed when I realized.

This woman with extra long legs

It's just like stock photos in picture frames to perpetuate unrealistic beauty standards for women. JK, her man is wearing the same colored pants as she is. The next one is similarly confusing...

This kid with no head

This kid either has no head or a giant head, depending on how you see it. Or, if you're smart, the back of this kid's head is just blending in really well with the side of his dad's head.

No, this bird isn't drowning in a cup of ice water, even though that's what it looks like and he's being really dramatic. He's just standing behind the glass.

This demon dog with spiky teeth

That dog really looks like he'll rip your face apart! But silly us, that's just the wooden fence in the background.

What is this, the movie Zootopia?! For some reason, the idea of a police bunny is super funny to me right now.

This guy playing tic-tac-toe with an unsuspecting girl

It's not really a fair match because she's always starting in the same position and she has no idea that the game is happening. The next one is truly bizarre...

Either of those pairs of legs could belong to either of them. It's insane! But I believe the real split is a horizontal one — the top legs belong to the top woman.

Perspective is a funny thing, isn't it? If there were really 5-foot squirrels hanging around, we'd all be screwed.

The only explanation I can think of is that this person covered their head with bread and tied it off with floss to experience pigeons just going to town on their face. I don't know what would possess an individual to do this, but that's the Internet for ya.

What's happening here?! Is she facing sideways or forward?

This black hole is actually an adorable pup! Who knew?! The next one is also so cute...

"Hello? I can't hear you! I have snails on my ears. No, that's not a metaphor. I actually have two snails covering my earholes."

Believe it or not, this effect was achieved with entirely practical effects. That's makeup, people! No photoshop, no photo-editing.

Doesn't it look like that sun is giving that man a massage and that both parties are intensely upset about the situation?!

That alligator wearing sunglasses looks truly chill while buckled into the seat of a car. He's cute!

A poor middle school student gave his teacher what looked like a nice fake rose as a gift. But it wasn't a nice fake rose. It was a lacy thong. Share this with someone who could use a laugh!