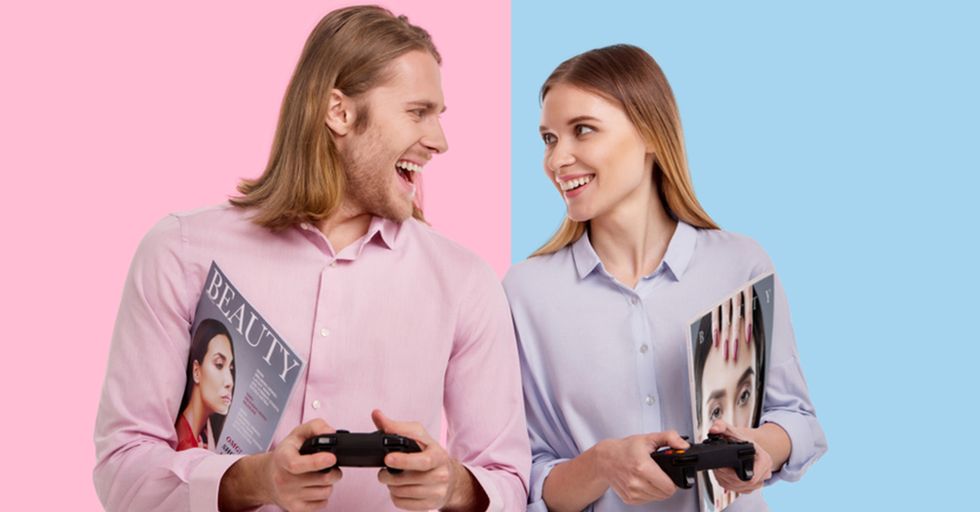 The Weird Science Behind the Reason so Many Couples Look Alike

Dating is absolutely the most soul-grinding thing we do as people. You go on a million dates with a million people, and each time you find out you have some kind of fundamental disagreement that means the whole thing isn't going to last. (For me, that's dating someone who doesn't like the last episode of Lost. "It was a character show — of course they weren't going to answer all the mysteries!" I've screamed at many beautiful and kind women who loved me.)

So when someone you know begins a relationship with someone new, you can't help but be happy for them. They made it through the dating gauntlet and came out the other side with a partner in tow. It's really, really wonderful.

Unless they look alike. Then it's weird.

We've all seen a couple who looks a lot alike and wondered why it was happening. Well now, science has an answer. Keep reading to find out just why we're so likely to date people who look like us or be doomed to fall in love with yourself and make all your friends uncomfortable too...

Some people are just objectively attractive.

Take Mandy Moore, for example. It's hard not to look at her long, flowing hair, giant Disney princess eyes, and high, high cheekbones and not fall in love.

But everyone's taste is different.

Maybe you're into beards, or brunettes, or tattoos? Different strokes for different folks, you know? And remember, everyone is attractive to someone, even those of us who are not Mandy Moore.

Being attracted to someone boils down to an ephemeral good feeling.

Attraction is this complex mix of feelings that gives us this general, good feeling. I tend to feel it when I get chills down my spine — that lets me know I'm either into someone or I have just encountered a ghost.

But it's almost impossible to pinpoint where specifically that "good feeling" comes from.

But attraction doesn't have a clear line between cause and effect. You can't say "this man has a beard and I am therefore attracted to him." The concoction that is attraction is made up of some combination of his beard, his smell, how well he takes care of his cuticles, how much old, dry ice cream is in that beard.

But some folks? Some folks are just straight up attracted to themselves.

You know who I'm talking about — those couples consisting of two people with the same hair color, the same shape of nose, and the same body type. They always look like they should be standing next to each other in a hallway in The Shining.

It's weird when a couple looks exactly alike, right?

You can't help but make assumptions about these kinds of couples. Are they narcissists? Couldn't they afford a mirror? Are they going to work as each other just to try out the others' job?

But most of all, it looks like they're dating their sister.

And here we come to the actual disconcerting part of these types of couples — it feels like they're intermingling their families. The notion of dating a family member has been so thoroughly bred out of us evolutionary that even a hint of incest gives us the heebie-jeebies.

Or worse, their twin.

Of course, we know these couples aren't actually related. That would be insane. But our stupid lizard brains can't help but look at them together and just go "oh my god, ick."

I mean, you want to be happy for your look-alike couple friends...

What if this pseudo-clone is going to one day become your friend's spouse? Are you going to skip the wedding? No, you're going to show up, because that's what friends do.

... but you do NOT invite them to your big group-couples outings.

It's not like you're going to share a meal with these similar-looking maniacs. Of course, they could find out about the event, and if they absolutely insist on coming, you can compromise by inviting one of them and seating them next to a mirror.

Some couples grow to look alike.

One study from 1987 suggested that couples start to look more alike over time, because they're lived together, and shared experiences.

In other words, if you share the same environment with someone for long enough...

... the environmental factors that influence your face will also influence your partner's face. These couples have shared smiles and frowns, carried the same burdens. That leads them to develop the same wrinkles, the same hunches, the same grimaces.

But what about the people who actively pursue partners who look like themselves?

There are a lot of reasons people date those who look like them, and none of them are quite what you think. In a story from Time, Justin Lehmiller of the Kinsey Institute is looking into the phenomenon. “These traits might come to be seen as comforting," he said to Time. “They’re familiar to you."

The idea is, you know your face, and presumably, like it.

No matter how self-deprecating you might be around your friends, or how able you are to talk yourself into hating your appearance, we all have a framework for what looks good, and that framework mostly comes from looking at ourselves.

Then, subconsciously, you're more likely to choose a partner who shares similarities with your face.

Lehmiller also said, "people naturally gravitate toward people who are familiar, even though the whole process is likely subconscious." So when you're sitting in that weird stew that is attraction, you're not thinking, "I am familiar with this nose shape and am therefore into this person." You're just intuitively going "HUBBA HUBBA."

And there's science to back this up.

A 2013 study showed us that, yes, recognizing our facial features in other people does make them more attractive. The researchers took images of the participants' partners and slightly altered the face, photoshopping in new features. One group was shown pictures of their partners with arbitrary changes, while the other group was shown pictures with their own features added in. The subjects tended to be more attracted to the faces that had hints of their own face.

(Also, whose job is it to photoshop these things?)

Can you imagine getting up at 5 AM, taking the dog out on a run, coming home, making a bagel, getting dressed, and going to kiss your wife goodbye, only to walk out the door and say to yourself, "Welp, time to go photoshop a man's nose on his wife's face"?

But how familiar is familiar? Are we talking our family-level familiar?

Because you know who else we share physical features with? Our families. And now we're right back to wading through the sewer water we started in — if we're attracted to people who look like us, are we attracted to our families?

According to science, the answer is: maybe?

another study from 2010 asked its responders to rate a stranger's overall attractiveness. The twist was, before some of the pictures, the researchers flashed a picture of the subject's biological parents onscreen. The results found that if you were subconsciously thinking about your parents' face, you were more likely to find the person they were looking at attractive.

But! There is also a potential genetic factor.

There is research suggesting we're attracted to those who share our same genetics, which would account for the whole "parental attraction" thing. According to Time, long-term partners are more likely to share genetic predictors "of everything from height to educational attainment."

But PSST! Those are really just more environmental factors.

Okay, that was a lot of studies — here's the take-home point:

Attraction, at the end of the day, is made up of so many variables it might as well be random. We can do our best to determine if it's shared experience, cultural, genetic, or Oedipal. The truth is, it's all of those things, plus a million more variables.

Yes, maybe someone you're into reminds you of yourself.

Maybe you're just a narcissist? Or maybe that person who looks like you happens to work at your favorite ice cream store and you have a positive association with that? Who knows? Variables.

Or of the ice cream man who was mean to you growing up.

Maybe you were taunted by a sadistic ice cream man as a child; one who would drive just faster than you could run, your single dollar held high. If you're a masochist, I could see hanging out with someone who reminds you of him. You see? Variables!

Or of the time you were embarrassed in front of everyone.

Some people have a shame fetish, and that's cool! But if you meet someone who tucks in their shirt just like your 9th grade science teacher who miscalculated the centrifugal force and broke your nose, you might think he was hot and not understand why.

Or maybe there was ventriloquist dummy that loomed over you at night when you were a child and no one else knew it was alive but you did... you did.

Twenty years later, you meet a cop who reminds you of the one nice police officer all those years ago who believed you... you might marry that person on the spot.

We don't get to choose who we're attracted to.

Sometimes, the people we hate the most are the ones we keep coming back to. It's tough, but these subtle chemical reactions that add up to attraction are one hundred percent out of our control.

(It would be much easier if we did.)

For instance, I would choose to be attracted to someone other than Mandy Moore, because she seems very busy filming This Is Us — far too busy for a relationship with me.

So while we are all made uncomfortable by similar-looking couples...

And believe me, I am. One of them should volunteer to have facial reconstruction surgery for the good of the relationship.

... we should treat their attraction like the random roll of the dice it is.

It's not like they're choosing to be attracted to their mirror image. It was just the luck of the draw. So maybe we should start inviting these couples to our big couple hangs (while also enforcing a strict dress code so they don't wear matching sweaters). Not convinced? Here are 20 couples who look almost exactly alike...
50%