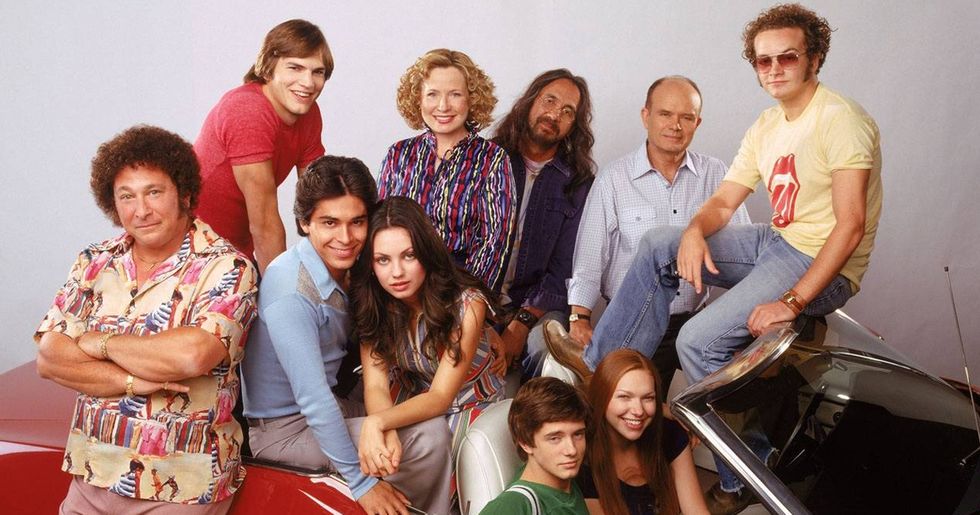 30 Strange Details From ‘That 70s Show’ That Have No Explanation

For those who watched That ‘70s Show after work or school every day, the show will always hold a special place. However, there are some truly mind-baffling parts of the show! What are those, you might ask?

From wacky timelines to weird relationships, some things just can’t be explained!

The mysterious remaking of Laurie.

For the first three seasons, Laurie was played by Lisa Robin Kelly. Then, she totally disappeared, with no reasons given…until she suddenly reappeared in season five, for four episodes. Then, in season six, she was played by Christina Moore, and only for six episodes.

Where did Donna’s sister go?

The whole timeline was a mess.

So, the show started in ’76. Then, it became ’77 after 12 episodes. By the end of the third season, it was ’78…and it stayed like that until the sixth season. And then the rest of the show took place in ’79, before ending with the season finale in the ‘80s.

Which means holidays make no sense.

Were these people throwing two Christmases during a year? Because despite the show happening over three and a half years, nearly every season had a Christmas episode.

And it was kinda hard to tell everyone’s ages.

How old were each of the kids at any given time? It was a pretty wacky timeline, and tracking their ages throughout the show is difficult. Next up, there were some weird friendship dynamics within the main gang.

The way these friends treated each other was actually kinda strange.

Eric and his male friends all referred to each other with last names, with the exception of Fez… because we don’t know his real name. Even Donna did this! Jackie was the only one who didn’t, which makes you wonder what the deal was with this close-knit group of friends.

Despite it taking place in the same universe, having many of the same writers and production staff, and featuring Forman’s cousin as a protagonist, it isn’t considered a direct sequel. Also, it flopped hard.

Also, That ‘70s Show never really focused on the seventies after that first season.

The show lasted too long.

That ‘70s Show will always be special to its fans, but if we’re being honest, it doesn’t really make sense that the show lasted as long as it did.

Not to mention, it kept trucking after Eric and Kelso left.

Consequentially, the eighth season didn’t actually have a point. Why would you put fans through that?! After Eric and Kelso left, something even worse happened. See what on the next page!

And then, there’s Randy.

No. Just…no. Don’t try to replace Eric with Randy Pearson.

Could it have been any more forced? Eric leaves for Africa, and…surprise! We’ve got Randy! Who, after Donna’s long history with Eric going back seven seasons, was a pretty poor replacement.

Did you know that Randy was actually supposed to be Eric?

Yep, he was going to replace Topher Grace. And then when that idea was shot down, he became Randy. Poor, disappointing Randy.

Fez and Laurie’s marriage was a head-scratcher.

The season 5 finale saw Fez and Laurie deciding to get married so he could stay as an American citizen, rather than be sent back to his country. But after Laurie disappeared from the show, the status of their marriage was totally unknown! Nobody knows what happened to them afterward.

The water tower really should have been closed off.

Think about it. If it had been closed off or even just renovated, Charlie Richardson wouldn’t have died. Why was it such a frequent hangout spot for a bunch of teenagers? On the next page, some things about the way these high schoolers were treated that make no sense!

Also, Kelso shouldn’t be okay after falling from it so much.

He should’ve gotten some serious physical injuries from that. Just sayin’.

Why did Red let ‘The Circle’ take place in his basement?

These kids were doing weed in the basement. And even after Red catches them once, they still manage to get down there and keep at it!

The 'promise ring' kerfuffle was way too much.

How far can you blow something out of proportion? We found out when that went down between Eric and Donna.

What’s the difference between Eric and Laurie?

Despite Red’s portrayal as the absolute authority in his house (and he’s pretty hard on Eric, as we’ve seen), Laurie’s character is made out to be a spoiled brat. Why were Red’s children raised so differently? Especially because Laurie was the oldest, and only daughter!

Jackie and Kelso’s relationship was a strange one.

After all, he kept cheating on her and generally was a terrible boyfriend. And yet, she’d always take him back! Jackie could’ve done better. Next, hard-to-follow family trees and unnecessary jokes that the show really didn’t need.

Hyde’s family was a bit convoluted.

From a young age, he was living with Edna, his mom. His legal dad, Bud, abandoned them. Then, Edna and Bud get back together—and they abandon Hyde. And then, Hyde discovers his biological father, William, and develops a good relationship…but still spends more time with the Formans.

Mila Kunis pulled off a convincing 18-year-old…despite being younger.

She told producers she was 18 during her audition, but she was actually 14! Her performance was Jackie was so great that the producers let her go ahead and do it when they found out, but it’s funny that they bought it for so long!

Did they have to make Kitty’s menopause such a joke?

Menopause happens. You don’t have to make a long running gag of the character going through it!

Because the way Fez was portrayed, as opposed to the other characters, was often racist. On the next page: teenagers sometimes go through a lot of relationships, and the same is true for these characters…but that doesn’t mean they made sense!

And then Fez with women was a whole other can of worms!

Was nobody bothered that he used to hide in the women’s bathroom? That’s objectively gross and creepy.

Jackie and Fez were a bit sudden.

Hyde and Samantha’s marriage was disappointing.

Why didn’t he end up with Jackie?

One running gag on the show was Fez’s home country…and to this day, we’ve still got no idea where he’s supposed to be from!

Kelso’s odd relationship with the law.

Sure, Kelso has done a bit of jail time, but only for minor offenses. This guy “borrowed" a police car (and let it get stolen), and burned down the police academy with a flare gun. Why wasn’t be in jail for a few years? He must have a whole lot of luck. Share this story with other fans of That ‘70s Show, and see what they think of these strange show details!