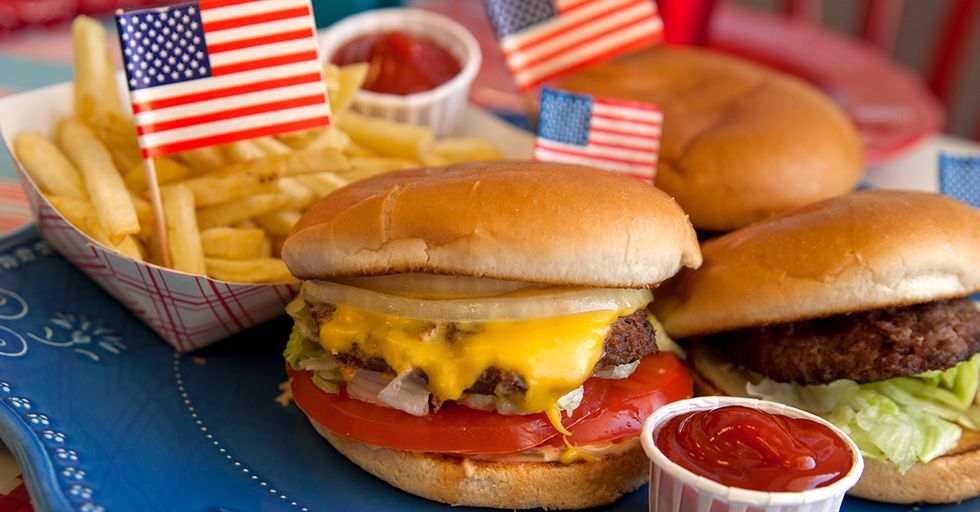 Americans have some...interesting eating habits. For one, we put ranch on everything. If you go visit another country, there's a big chance they don't pour ranch on every single thing they eat. Also, portions here in America are...well, super-sized. Listen, America has some seriously great cuisine. There are tons of amazing restaurants for foodies to delight in - but it's endlessly entertaining, interesting, and telling when you go into an "American"-themed restaurant in a foreign country. The things they think constitute as American fare is sometimes over-the-top, but also sometimes truly accurate.

A recent Reddit thread asked the question, "Non-USA residents of Reddit, does your country have local 'American' restaurants similar to 'Chinese' and 'Mexican' restaurants in The United States? If yes, what do they present as American cuisine?"

Some of the answers may shock you, and some may not surprise you at all. Sit back, grab a bowl of ranch dressing, and enjoy!

Only one, it seems to be picking up as a trend. Bacon burgers, ribs, buffalo wings, fried chicken, corn.  - karatelemon

Another Australian. I'm in Melbourne and we've been having a lot of US restaurants pop up - basically divided into burgers or bbq or a combo of both. Deep fried anything and grilled anything with a good serve of carbs and liquid sugar/beer. - Nightospheric

As a fellow Australian, this is super true. I've seen a few 1950's style diners from American movies pop up in recent years. It's kinda weird though, and something I'd only go to for the gimmick, not like just going to any old restaurant to eat out. - Ultitanius

A couple of food trucks as well. It gets kind of boring. Only so many times I can eat deep fried mac n cheese balls. Like, I really wanted to try some American style slow cooked brisket or cornbread or coleslaw or some shit. Often its just "BURGERS AND WINGS Y'ALL." - strangervisitor

Yeah there's a ton of it here in Sydney, from dedicated BBQ places to now all pubs have "American" style menus the past 5 years. It's pretty great tucker, god damn unhealthy, but who cares. The pub cheeseburgers have gotten better that's for sure. - PedroDelCaso
Sounds about right...

There are so many in Brisbane right now. I kind of love them. Horribly unhealthy but damn they do a good burger and fried chicken. - raven19

I visited the UK a few years back with a British friend, and they dragged me to an American restaurant. It was themed like those 50s diners, and the only things on the menu were burgers, fries, fried chicken, hot dogs, pizza, and pulled pork... That said it was pretty damn good food. - riffler24

American food appears to be wings and insane amounts of pork ribs. All barbequed, of course. - thedomha

Not quite the same

I would think that American style BBQ (low, slow, dry heat) would have really taken off, because a lot of traditional British food uses low heat for long amounts of time, and pork is plentiful, cheap, and quite good. But very very few places even try to do American-style barbecue. They just cook the ribs and put sauce on them. I don't get it. - SergeantRegular

Saw this place in Paris. As someone from Indiana, I did a double-take. http://www.indianacafe.fr/ I love that it serves that famous Hoosier style of food, known as Tex-Mex. - TardisKing

I enjoy that Caesar salad gets roped into Tex-Mex. And that it lists a bunch of individual foods and then just says "and brunch." - RagingAntiDentite

American here, but in-laws in India who we visit every year. They have all of the usual American chains, but one thing has always perplexed me, which is the street stalls and mall kiosks selling "steamed American corn." Basically, it is sweet corn, served plain in a cup or with various spices including chili, chat masala, mint pudina, black pepper, punjabi tadka, etc. My father in law thinks this is what all Americans eat as a snack food and keeps offering to buy it for me when we go out on an excursion. - lindabhat

In China we have the big American chains like Pizza Hut, KFC, McDonalds, Burger King, etc... and these are seen as "American restaurants". There are also lots of independent American restaurants run by locals. They tend to have burgers and fries, terrible steak (usually with black pepper sauce), weak coffee, and lots of not-quite-Chinese but definitely not American dishes like curry beef, and Black Pepper Spaghetti. Oh, and California Beef Noodle King USA. In general, the American food here in China is gross, as compared with food in America, which is awesome (or, at least gross and awesome). - dongbeinanren

And Pizza Hut is a fancy sit-down place where you could take a date. - PseudonymIncognito
Ummm, say what?!

I'm American, but could not resist going to a chain called American Style in Iceland. I told one of the employees that no burger chain in the US would use fresh cucumber instead of pickles. Not a bad burger actually, had that fake '50's theme as I remember. - HappyHound

Went to an American diner when visiting Germany. The one thing that stood out was banana juice. - G01denW01f11

American living in Japan. My family and I frequently go to a restaurant called "Cowboy Kazuko" or "Cowboy Family" It's a steak house with a salad bar. There are a great many Japanese steak houses and some of them can be very high-end. Depending upon where you go, it can be really expensive - especially if they serve Japanese beef. Restaurants like Cowboy Kazuko are "family restaurants" and are much lower priced family-friendly restaurants. These kinds of places do a lot of hamburger steaks, chicken, etc. They usually feature beef from the US or Australia. Generally, the food is pretty good (quality and taste) although the portions sizes are not what you might get at home. Overall though, I usually enjoy them. - Sean_Ornery

Speaking as a person who lived in Japan for quite a while, I still have a hard time adjusting to how large serving portions are in the US. How do people eat that much!? - NotAudreyHepburn

In Australia, I've seen a few American BBQ-style places. The one I used to live next to (before the owner skipped town) was pretty representative, albeit maybe a little confused. It was, however, thoroughly inauthentic for charging for extra sauce, no free refills, and $10 a pint of Coors. Absolutely criminal. - katerific

Not a restaurant type answer, but I visited Germany a few years ago and Peanut Butter was marketed as an American food. Red, white and blue label with the Statue of Liberty. - Av_navy20160606

In Korea, if you go to a burger joint and order a burger with fries, depending on the place, you'll get a burger and 4-5 steak fries. If you're extra lucky, the burger won't fall apart as soon as you touch it. I've also gotten a burger from one of the convenience stores with strawberry jam in it. It was not pleasant. Last year, Chicago pizza exploded in Korea (Korea has a new American food obsession 2-3 times a year, this year's being Subway) and my city suddenly had 5 Chicago pizza restaurants open up in the span of about 2 weeks. They were okay, though I've never had authentic Chicago pizza. One of my mates told me that they, like most Asian pizzas, pale in comparison to the real deal. - yognautilus

Here in Moscow, we have a restaurant network called Beverly Hills. It serves burgers and stakes mainly, also every single one has a classic jukebox. - isador1911

Indian here. Lots of metros have 'American food' but Bangalore is the Mecca of American food in India. There is a lot of all-day American 'cafes' that serve wings, burgers with chips, pasta, pizzas, french fries, and other finger food, shit coffee, and excellent milkshakes. There is rarely beef and pancakes and waffles are a good hit. It has grown into a sort of Sunday brunch thing after getting drunk the previous day due to the general grease and finger food nature. Since there is a lot of competition in Bangalore the food tends to be good (also apparently authentic ). For most of the nation though American food is McDonald's, Domino's and pizza hut. It is also not preferred as it is seen as something very unhealthy. - crk0806

I'm a French person living in China. In China, they more or less have "American" restaurant, generally Steak & Grill, but you have many American fast food chains. In France we don't, we just have your standard fast food chains (McDonald's essentially, the first Burger King opened 2 years ago). - weirdintranslation

I was up in the Swiss Alps in a smaller town, and their grocery store still had El Paso taco seasoning, shells, and sauces. I was pretty impressed by that. Goes to show, everyone loves tacos. - somedude456

Here in London, we actually have a good American style place! There are a few American style diners and gourmet burger places, we recently got Five Guys (four-word review: better than I expected) but by far and away the best is The Blues Kitchen. A whiskey bar that does proper southern comfort food, everything is slow-cooked, pulled and glazed in overly sweet sauces, and you get a huge portion of brown soft meat with the smallest side of coleslaw. - SuzyJTH

Country: Estonia Pretty similar to other countries in the thread already. We have two small chains of restaurants that brand themselves as American food. The menu is basically chicken wings, burgers, steaks, bbq, American style pizza, American desserts, gumbo on the soup menu. The food tastes quite similar to the things that I have eaten in the United States when I've been there. The interior decoration obviously also goes for an American diner feel with memorabilia on the walls and booths and all. - fukiku

In Ireland, we have our own chain of 50s style American diners, called Eddie Rockets. They'd serve burgers, hotdogs (no other chain here in Ireland would really serve hotdogs), really nice milkshakes, all that jazz. It's pretty damn tasty but fairly expensive so you wouldn't be going there too frequently. - cailin-rua

It seems like most of the world equates big portions and greasy, unhealthy finger foods as American cuisine. And let's be real: they're not wrong! God Bless America, y'all.
20%

$10.81 $8.65
Buy Now
See More Deals
We hope you find these deals as awesome as we do! Just an FYI: we may receive a share of sales from links on this page