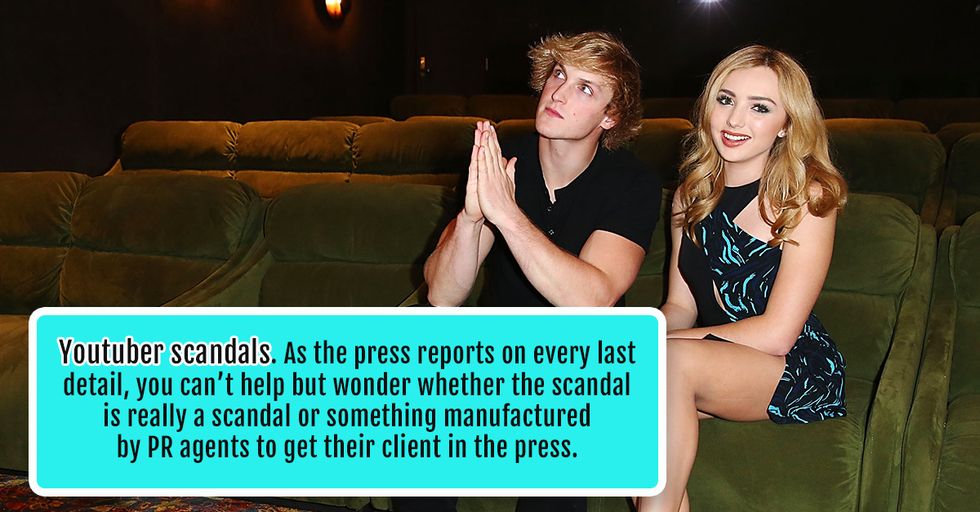 Have you ever come across something so weird you scratch your head and say huh?

It's even worse if that thing is popular because you then have to spend a couple of minutes staring at it and thinking "how – HOW – is this a thing?"

Here are 11 weird things that should have never gotten popular in the first place.

Have you ever been in this situation? You're super hungry for a certain something, and you decide to get the recipe online. There's only one problem though – you have to get through the recipe's background history first.
As Reddit user Ragnoik huffs, "Freaking recipe websites where I have to read about how you and your family were inspired whilst climbing the mountains of Wyoming and discovered a wooden shack with a bearded man inside that gave you the secret recipe of how to make the ultimate pulled pork sandwiches. Bitch just show me the recipe." Indeed.

Perhaps we're a bit old, but do you ever notice that every once in a while, a new Youtube star that EVERYONE knows except for you pops up with a new scandal?
And as the press breathlessly reports on every last detail, you can't help but wonder whether the scandal is really a scandal or something manufactured by PR agents to get their client in the press.

Seriously, how did this become a thing? What minion of hell and all the devils sat down one day stroking his chin and said to his compadres – "I have an idea, let's call people automatically." There is one thing worse than regular robocalls...
And even worse than this are all the robocallers that use numbers near to your own so that you pick up because your monkey mind recognizes them. Evil. Pure evil.

This is actually a very serious issue. To everyone who has ever been even intrigued by these, please understand there's a reason the labels say "not fit for human consumption."
Synthetic cannabinoids (marijuana) also known as spice and K2 can cause the following side effects:

Horrified? You should be.

Plastic microbeads seemed like a good idea once upon a time. You could rub them on your face and they had "exfoliating properties."
Then people discovered around 8 trillion microbeads were entering waterways per day, and that they were significantly contributing to water pollution. President Obama, thankfully, banned them in 2015. This next one will really make your blood boil!

When did glamorizing cheating become a thing? For some people – both male and female – you're only truly popular if you have "side ho's."
Say it with us now, "cheating is not cool." No matter how pop culture you make it, no matter how many slang words you sling on it, it's NOT COOL.

There's fluff magazines, and then there's the Daily Mail. The sensationalist British tabloid has seen its share of controversies from accusations of institutional racism and sexism to fall-out because of lack of journalistic integrity.
Reddit user Morph811 says,

oh my god yes, f*** those people. they made a story about my high school’s suicides and called it “the suicide school" as if it were a shitty, low budget cartoon. They even broke laws doing so, it was so f***ed.

Or people making up names in general. Rule of thumb, if there's a common spelling you can use that works well enough, don't saddle your poor baby with a complicated one. Honestly, the names you're about to hear will make you wonder if these people were dropped on their heads as babies...
For instance, one parent named their child "Brihyyana," and another named theirs "Abbuhgayle." Good luck spelling that.

As romance novel purists, we actually have to agree with this one. The writing wasn't that good and the approach towards the more controversial portions of the book was problematic to say the least.
There are plenty of spicy romance novels out there that are kinky without being problematic. 50 Shades of Grey was pretty much packaging.

How in the name of abomination did these become a thing? How? They're basically little toxic bombs just waiting to destroy the environment. Do us a favor – just get regular coffee instead.

11. Cash me outside girl

It says something about our current culture that someone like the "Cash Me Outside" girl, Danielle Marie Bregoli-Peskowitz, is raking in more money than teachers. Then again, the girl's a hustler, and there's nothing wrong with that... Do you know any weird thing that should've never been popular? Share this to tell your friends.