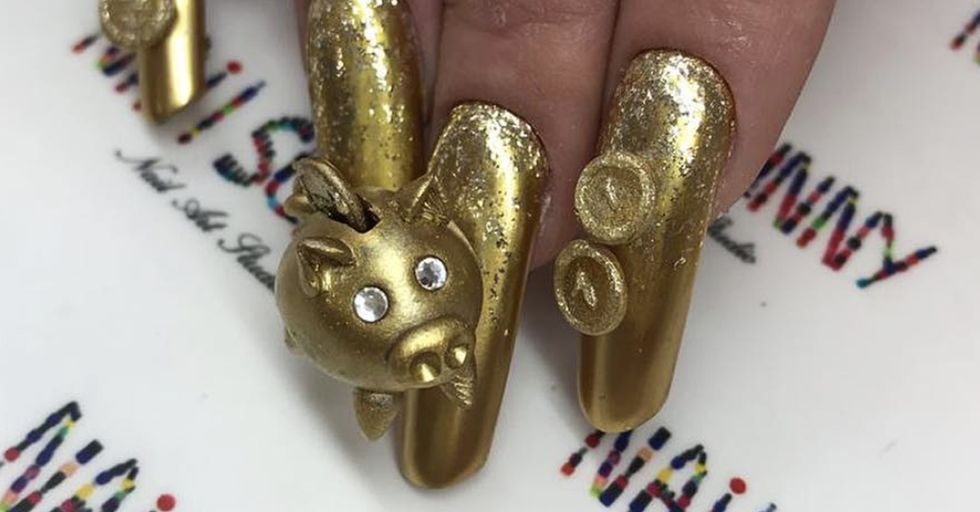 Nail art has become an Internet phenomenon. A lot of the mani-pedis you find on Instagram are super detailed and impressive and beautiful. But I am telling you right now, these are not those manicures. Yes, they are very detailed. Yes, they are very impressive. But the vast majority of manicures on this list are not necessarily what I could call beautiful. Instead, they are more bizarre, strange, and will prompt you to ask the question, "But why though?"

And that is why I love them. The @nail_sunny Instagram account totally subverts what you think of as impressive nail art. They truly push the boundaries and come up with some wacky stuff. And I've collected the wackiest of the wackiest here. I am talking cheese grater nails, pool table nails, baby bottle nails with actual liquid inside of them. Yeah. I know. This is about to get really weird.

Does this GIF make you uneasy?

Well, get used to it. These manicures are so bizarre that some of them might send a chill down your spine. Sorry, not sorry.

It seems that this manicure was inspired by the news that the most-liked picture on Instagram is now a picture of an egg. Swipe through to see the eggs crack.

Not only do these nails have pockets drilled into them, but you can actually play pool on them. This is too much for me.

This is so disturbing on so many levels. Nails aren't supposed to have hair! At least braid it or something.

This is just making me want a cocktail. I don't think nail art is supposed to do that.

These are kind of pretty but also so bulky and impractical that they just kind of make me anxious, which is the opposite effect that flowers are supposed to have.

Hey, this is kind of handy. You won't like, be able to type on a computer, but at least you could unscrew all your screws.

With this manicure, you could never run because then you'd be running with scissors and it would be too dangerous. Don't run your fingers through your hair with these nails. You'll end up bald.

This one is SO unsettling because they included the gums! Why would you do that? It's so weird I feel like I have to take a shower.

You know, I just don't know anymore. I just have no words. Why? Why not? Whatever.

This is bonkers. Watch the video because these are actually functional. Like, you can knit with these nails. It's crazy!

This is like a super classy version of tech decks, and I kind of love it. These would be so fun.

I have no words. I just don't know. Don't ask me, I don't have any answers.

These are great because when someone has a bright idea you can hold it over their head and make a "Ding!" sound effect.

They're labeled with the days of the week! This is kind of nifty. Wholly impractical, but still a fun idea.

These are really cute. You can't possible function out in the world with these, but that doesn't mean they're not cute.

There are tampon nails on the next slide! It's high time we start celebrating periods. This is a weird way to do it, but whatevs.

It comes with the melty, cheesy pull and everything! BUT I don't think they're actually edible, so don't try chowing down.

These are quite silly, but they are also some of the most useful nails on this list, so what do I know?

OK, this just seems dangerous. Do not try this at home.

I hope that's not real milk in there because that would quickly smell very, very bad.

These maybe aren't the craziest nails on the list, but the built-in bottle opener is definitely something, and I wanted you to see it.

I don't know anymore. I give up. This is the least effective version of a grater. Don't do this.

I honestly have no idea what's going on in this one, but I think it's supposed to be human flesh from some part of the body. Can anyone help me out with this one?

Don't worry, only one of the eyeballs is falling out of its bloody socket. Otherwise, it would be so weird.

These might be the worst of the bunch. Notice that brown goop on the brush that's definitely supposed to be poop.

OK, these are the best ones and I want them. Are they edible? I want them if they're edible.

There are a lot of ways to say, "NOPE!" so I'm just going to tell you to imagine me saying all of them.

These are sort of fun but also the holes in the nails make me anxious. I feel like you'd get your hand caught on things and tear your fingers off.

At least they're using protection. Share this with someone to make them laugh!