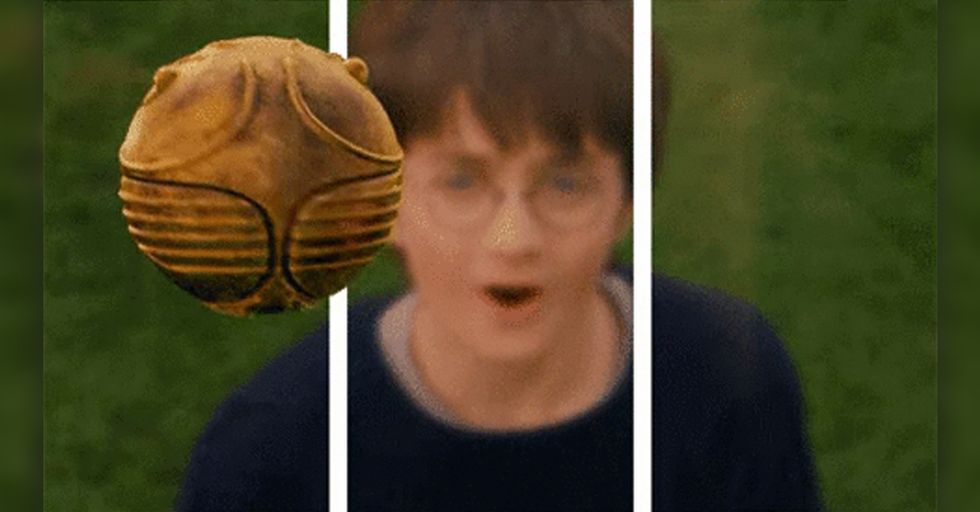 Welcome to Split-Depth GIFS, The Coolest New GIF Technology You Need to See to Believe

Believe it or not, GIFs have been around for more than 30 years — they were first introduced by CompuServe in 1987.

Crazy, right? Since that time, GIFs have become a universal form of communication on the Internet.

Feeling awkward? Use the Chrissy Teigen GIF. Feeling like the world around you is falling apart and you're trying your best to hold it all together? The This Is Fine GIF is at your service.

But while GIFs themselves have been around since the '80s, it's only in the past couple of years that a new kind of GIF has come on the scene.

They're called split-depth GIFs, and they are basically magic.

Let's start with the basics. Just what exactly is a split-depth GIF? Well, I'm glad you asked.
Split-depth GIFs create a false sense of depth that tricks your brain into seeing three-dimensional movement when, in fact, you're viewing a simple 2-D video.
The effect is achieved by superimposing lines over the original GIF. This creates another plane within the image. Basically, your brain thinks the lines are at the same level as your computer (or phone) screen, and the actual movement is going on "behind" those lines.
The lines can be either horizontal, vertical, angled, or a combination of all three. Here's an example of the effect be achieved with horizontal lines. As soon as part of the video crosses the lines, your brain interprets the movement as emerging from your computer screen, and voila! The split-depth effect has you leaping back from your screen and looking like a fool.

This one is especially tricky because the lines are actually the top and bottom borders of the image. Did it surprise you? You might be asking yourself: How are split-depth GIFs made? It's actually a pretty long process...
To start with, you open the GIF in Photoshop. (Yes, even in this, Photoshop has proven it is taking over the digital world.)

You then create a layer above the GIF's active layer and draw the lines. (Most creators use white lines, but most colors will work.)
You then have to copy the lines over every single frame of the GIF. Depending on how long the GIF is (and its quality), this could be anywhere from about 20 frames to hundreds.
Then, you use the eraser tool to erase parts of the GIF that you want to overlap the lines. Once again, this has to be done on every single frame.
If you've done everything correctly, you've got yourself a split-depth GIF! This next GIF is probably going to make you leap back from your screen and say "awwww!"
Pretty cute, right? This little seal just wants to be your best bud!

Rocket Raccoon, on the other hand, is clearly not here to make friends. Can you believe this is someone's first attempt at creating a split-depth GIF? Pretty impressive.
This is another tricky GIF like the orange juice one from earlier. Rather than using several white lines to create a new plane, this GIF artist used a single white bar along the bottom. It's super effective!
This one might be my favorite. You can almost hear the sniffs.
The best, most effective split-depth GIFs really make it seem like the bars are solid objects. Notice how the Snitch travels "beneath" the bar on the right and "over" the bar on the left, but doesn't simply clip through either of them.
Here's an example of someone using a bar that isn't white. It's also unique because there's only a single line — most split-depth GIFs have at least two.
This GIF shows exactly why you don't want to get on Captain America's bad side. You wouldn't want that shield flying straight at your face, now would you?
This dog is clearly on a mission. I'm not totally sure what it is, but he looks pretty focused, doesn't he?
Anyway, that's the art of split-depth GIFs! Keep your eye out for them all over the Internet. Maybe you could even share this list with a friend with some mad Photoshop skills and they could make one today!