Wendy Williams Explains the Reason She Fainted on Air, and It's Not What You Think | 22 Words 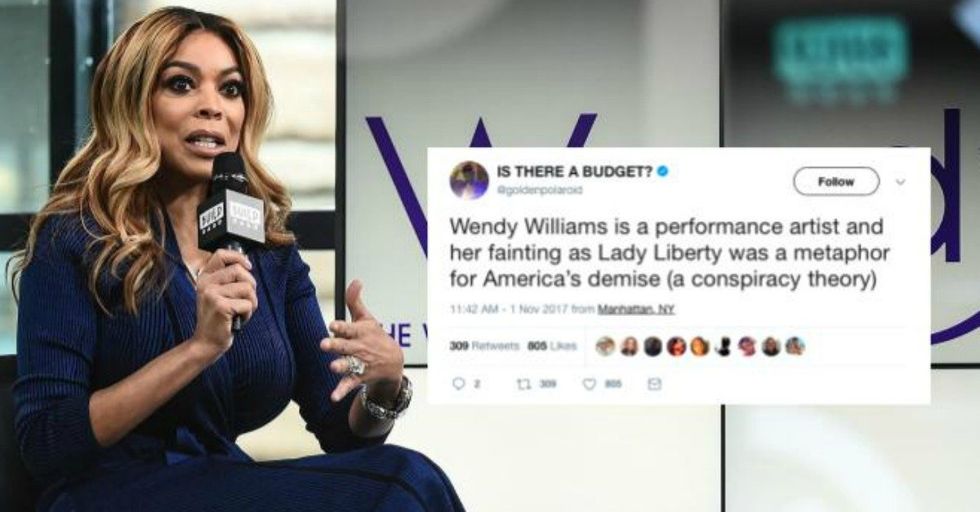 Wendy Williams Explains the Reason She Fainted on Air, and It's Not What You Think

Talk show host Wendy Williams fainted live on air this week as she began a segment of her Halloween episode. The gossip maven, clad in all green as a very statuesque Statue of Liberty, stumbled from her podium onto the floor in a very dramatic fashion. Viewers and gossip sites speculated that Williams had a stroke, but Williams was back in the studio the very next day.

As the show started, she sat down to address the speculation over the circumstances that led to her fainting.

She began by joking with the audience, saying, "First of all, I was trending all day... Fabulous!" But she quickly got serious. She explained that her faint was not a joke, saying "I'm a tall woman and it's a long way down."

Williams also explained that she tried desperately not to faint, but it was difficult.

She tried to hold on by telling herself there were only 12 more minutes to the show, but when she felt hot and dizzy, so she made sure to clutch her podium, because, as she explained, "I'm a woman of a particular age, I don't want to break anything. "

Williams was very quick to explain that the faint was not caused by a stroke. She went to the hospital and her blood work was fine.

Instead, she said, her was caused by menopause and an imbalance of electrolytes. "I'm a 53-year-old, middle-aged woman going through what middle-aged women go through if you know what I mean," Williams said. "The costume got hot. All of the sudden right before passing out, I felt like I was in the middle of a campfire."

As she ended her explanation, Williams also cautioned everyone who thought she was stepping down from her talk show.

"No, I wasn't stroking out," Williams said. "And for people who thought that I was, trying to get this purple chair next, nope, I'm here for a long time." But that wasn't all...

While Williams may have explained her alarming incident, some people weren't exactly convinced she'd set the record straight.

According to Entertainment Tonight, an unnamed staffer attributed Williams episode to marital strife. Williams has reportedly been having issues with her husband of twenty years, Kevin Hunter. "People are extremely concerned about it and worried she is going to completely lose it because this is so catastrophic for her," the staffer told ET. "Staff on the show are particularly concerned about the stress of it on her. To say she’s not handling the stress well is an understatement.