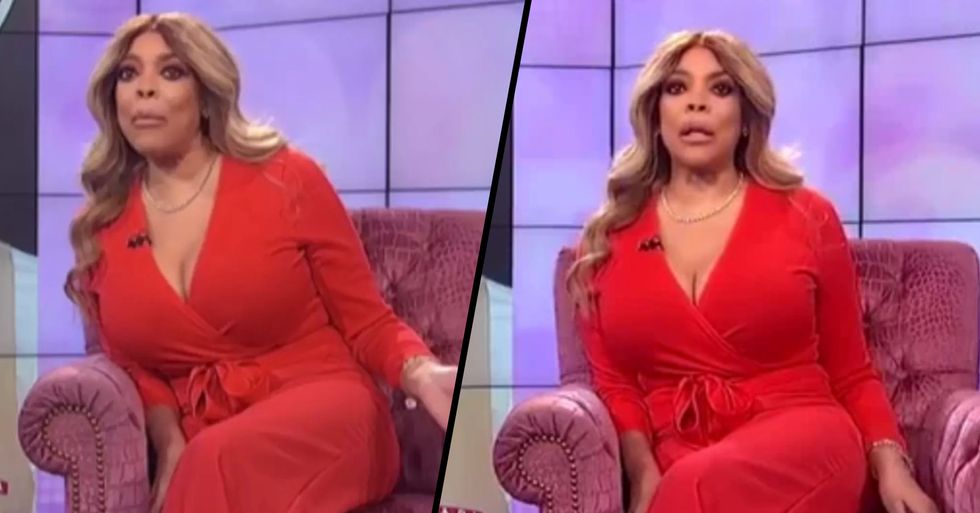 From her controversial comments to her eccentric demeanor, Wendy Williams has certainly raked in a hefty viewership for her popular talk show, The Wendy Williams Show.

She's certainly a character, but on Friday, viewers were left in hysterics when the host appeared to break wind mid-monologue. In fact, Twitter has descended into complete fart-induced madness.

And now, Wendy has responded, and it isn't what people were expecting. Keep scrolling to hear what she had to say...

Or when she mocked Joaquin Phoenix's cleft lip.

While gushing over his handsome and “striking" looks, Williams goes on to mention his cleft lip – all whilst mimicking it. She posed with her finger pushing her lip up for a painful 10 seconds while the audience nervously laugh

Safe to say, she's a character.

And while at times she can be eyebrow-raising, fans still keep coming back for more.

She also became the face of one of the most notorious memes.

How can we forget?

But viewers were left in hysterics after watching the most recent episode of her show...

Why? Because they're pretty sure she farted on live TV.

The moment came when the host appeared to shuffle uncomfortably in her seat...

Before a mysterious fart-like noise was picked up by the mic. Keep scrolling to check out the clip.

Of course, we can never really know for sure whether she did or didn't fart.

But viewers definitely have their suspicions.

After the show aired, Twitter exploded with reactions to the questionable noise.

Can’t sleep cause I can’t stop thinking about Wendy Williams letting out a nasty fart during Friday’s episode of her daytime talk show.
— cameron (@cameron)1579481137.0

People are convinced that they heard the host relieve herself of some gas.

Although, we aren't sure what Wendy will think when she watches the footage back...

She's never going to live this down.

"Sis didn’t even try to hide it," wrote one baffled Twitter user.

Check out the clip and decide for yourself. Volume up for this one...

Better out than in, right?

And now, it's what we've all been waiting for...

Wendy has finally responded to the fartgate scandal.

On her show on Thursday, Wendy addressed a "very, very serious" headline during Hot Topics... Fartgate.

And she denied it all. Of course.

Wendy had a huge speech ready...

She was really adamant that she did not pass wind, guys. “I don’t lean over like this to release a fart, I’m leaning over like this because it’s comfortable," Wendy explained as she addressed the “lean" fans noticed in the viral clip. “I like to release my hips and lean."

She went on to insist that she hardly ever farts...

Okay, Wendy. We've all used that one before. "As a matter of fact, I barely fart because gas gets released several different ways and mine is belching because all I do is talk."

The excuses were simply flowing.

"...I was like, ‘No, if I farted I definitely would’ve been laughing because farts are always funny,'" Wendy admitted before she played the “fartgate" clip on the screen behind her.

She then went on to say that, if she had farted, she would have definitely soiled herself.

Not a nice image, Wendy! “I went on with the story, and you know a girl like me would’ve been laughing at that. Second of all, by the sound of that fart, I would’ve had to go change my costume. I would’ve left a mark in the seat," she admitted. “I wouldn’t have even saved the costume, I would’ve thrown it away. It would’ve probably been soiled."

I think the presenter simply dug herself a deeper hole there...

We know a fart when we hear one!

It could have even rivalled the original fartgate!

Well, this isn't the worst thing Wendy has had to deal with...

The TV presenter faces a lot of backlash on a daily basis, so fartgate should be a breeze (literally) to her. Keep scrolling to hear her savage response to John Legend's "Sexiest Man" win, and the brutal response she received as a result...