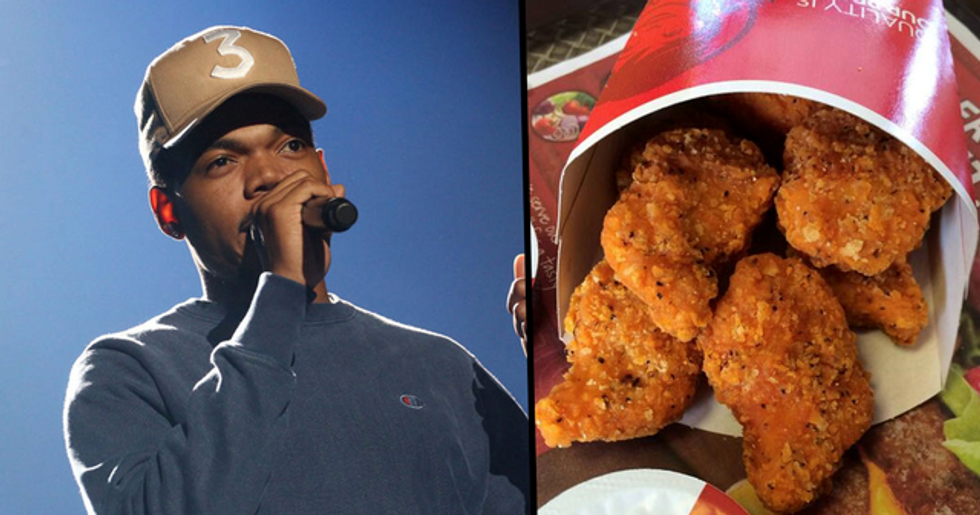 Wendy's Spicy Chicken Nuggets Are Returning Thanks to Chance the Rapper

The internet is an incredibly powerful invention. It allows us to reach people in ways that have never before been possible in a comparable way. Tweets can reach millions, and real change can take place because of it.

Chance the Rapper has just discovered that with a seemingly innocuous tweet that now has over 230k likes. In fact, it's now one of the most popular tweets of all time. Do you think it lives up to the other most popular tweets? Let's take a look!

Obama is the king of social media.

Barack Obama has one of the most re-tweeted accounts in the world. In fact, he wrote three of the top thirty most re-tweeted tweets. Following the Charlottesville attacks in 2017, he posted this photo with a quote from Nelson Mandela. It is currently the sixth most popular tweet of all time. Before that, he held the record for the most popular tweet in the world, when he was re-elected in 2012. He kept the record for over a year, until Ellen came on the scene…

It was usurped by the most famous selfie of all time.

At the 86th Academy Awards show in 2014, Ellen DeGeneres put together the most famous selfie of all time. It involved Jared Leto, Jennifer Lawrence, Channing Tatum, Meryl Streep, Ellen DeGeneres, Julia Roberts, Bradley Cooper, Kevin Spacey, Brad Pitt, Angelina Jolie, Lupita Nyongío, and Lupita's younger brother. It was retweeted over three million times, and was the most popular tweet for over three years.

Musicians have always been popular on social media.

The One Direction boys feature on three of the top thirty most popular tweets of all time. Most notably is Niall Horan's tweet, at spot twenty-three. He was not yet famous and was hoping the X Factor would go well. People found it later and loved seeing him before he was a megastar. They are, by no means, the only musicians in the top thirty, though. Wait until you see what Chance the Rapper has achieved.

Now a new boy band is more popular than 1D.

BTS is a South Korean boy band with seven members, and they have been incredibly successful so far. They were the most tweeted celebrities in 2017 and 2018, and have four of the top thirty most popular tweets ever. They had three number one albums in the US in one year, which makes them the second band ever to do so, behind The Beatles. They also had the second and third best-selling albums of 2018 behind Drake.

Drake was the inspiration for one of the most popular internet trends last year in the form of the #InMyFeelingsChallenge. It was first done by an internet comedian called Shiggy. As he tagged it with #DoTheShiggy, it is also known as the Shiggy. It basically involves dancing on the road to the Drake song, "In My Feelings", while doing some of the actions for it.

Will Smith won the #InMyFeelingsChallenge.

Will Smith beat everyone at the challenge, as he climbed onto the top of a bridge in Budapest to #DoTheShiggy. While it wasn't the safest option for a role model, it certainly looked cool and it's had nearly twenty million views on Instagram.

It was BTS who stole the show on Twitter.

Member of BTS J-Hope did the #InMyFeelingsChallenge and it became the fourteenth most popular tweet of all time and encouraged even more people to do it. It even inspired the start of their own #IdolChallenge.

Twitter can have a really positive impact on the world.

The power of the internet has been harnessed for important social changes too. The eighth most popular tweet was by Penn State. They pledged $0.15 in aid to help following Hurricane Harvey in 2017. They received over one million re-tweets.

But the most re-tweeted tweet is due to greed.

At the start of this year, the Japanese billionaire Yusaku Maezawa promised to split one-hundred million yen (or nearly $100k) between one-hundred random individuals who followed him and re-tweeted this. It worked and with nearly five million re-tweets, it quickly became the most popular tweet of all time, sadly. However, it wasn't the Oscars photo that it replaced, but a newer contender.

Chance the Rapper, born Chancelor Jonathan Bennett, is an American rapper from Chicago. He released a mix-tape in 2012 online and it began to be very popular. He has since released two more mix-tapes, Acid Rap, and Coloring Book. When he released Coloring Book in 2016, it became the first album to ever chart based solely on streams.

At the 2017 Grammy Awards, Chance the Rapper was nominated for 7 Grammys, and he won 3. He won best new artist, best rap performance, and best rap album.

He has always been an activist.

Chance the Rapper's dad was an aide to the Chicago mayor Harold Washington, and to the senator at the time, Barack Obama. He also worked on Obama's presidential campaign. Chance the Rapper also got involved in Obama's re-election campaign by phone-banking. In 2016 he created a non-profit organization called Social Works, to create youth projects in Chicago. He also campaigns for the end of gun violence. But this week he's been at the head of a new campaign.

Chance the Rapper willed the return of spicy chicken nuggets.

Positive Affirmations for today: I WILL have a good day, I Will succeed today, Wendy’s WILL bring back spicy nugget… https://t.co/AyyVFPfJoz
— Chance The Rapper (@Chance The Rapper)1556988604.0

On Saturday morning, Chance the rapper took to Twitter to wish positive thoughts to the internet. It was mostly positive life affirmations, but it also included a reference to Wendy's spicy nuggets.

What happened to the spicy nuggets in the first place?

At the start of 2017, a mysterious event occurred. One day the spicy nuggets were on the menu, and the next, they were gone. People couldn't believe it. Although Wendy's had suggested that they were still available at one or two locations, they were pretty much gone. But people didn't forget.

When a celebrity as famous as Chance the Rapper tweets, it makes a far bigger impact than most of us. The social media manager replied with both a pun and a teaser. They let the world know that it is not impossible for the spicy nuggets to make a return.

A lot of people agreed with Chance the Rapper.

@Mookychew @chancetherapper @Wendys Mentally imagining this tweet being said by a golden retriever is cracking me up 😂
— Sugar Leigh (@Sugar Leigh)1557017096.0

The online world is an active one. Once people saw that they weren't the only ones feeling so disgruntled, they all started voicing their opinions. It looks like a lot of people have been feeling the same way.

Then Wendy's involvement started to seem a bit more important.

After twelve hours of people echoing Chance the Rapper's sentiments, Wendy's started reeling in the online audience. Would it be possible to get the return of spicy nuggets?

The power was in the people's hands.

After a two year hiatus from spicy nuggets, Wendy's suddenly offered the people a way of getting them back. If they could prove (through Twitter likes) that over two million people wanted these spicy nuggets, then they could be brought back.

One Twitter-user pointed out that we didn't really need the return of Wendy's spicy nuggets. After two years, alternatives had been found at Burger King.

But Wendy's was ready for the haters.

Wendy's weren't having any of it. They are not up for people thinking that their spicy nuggets are anything like other people's nuggets. Although let's face it, chicken nuggets don't tend to be that different from anywhere.

Then we got the good news.

By the following evening, Wendy's was ready to make the announcement. Spicy chicken nuggets are returning to their menu. However, this might not be such good news as it first seems. Wait until you see what Amy Schumer has to say about it all.

After two years of finding the menu to be devoid of the one thing that would fill the hole, spicy nuggets are back. And it was Chance the Rapper that made this change possible.

The power that celebrities wield is incredible.

These days, being famous stretches far beyond celebrities' own talent. Instead, they can affect and reach millions of people with just two-hundred and eighty characters. Chance the Rapper managed that, with just a few words about missing spicy nuggets.

Other people are more skeptical.

Between social media influencers and celebrities that use social media for their own causes, companies are doing anything they can to try to get people to promote their products on their personal pages. Marketing has become a very different world, and involves a lot of work to try to make their product seem like a natural and personal choice, but also worthy of the hype. And that's not the only problem with celebrities endorsing particular products. Amy Schumer has a lot to say on that.

Following the news that Wendy's is going to return the spicy chicken nuggets to the menu, Chance the Rapper replied about releasing the nuggets in conjunction with his new album. This was either an incredible coincidence, or a very good marketing ploy.

Wendy's do not have a good track record for fair treatment of their employees.

@chancetherapper Hey @chancetherapper: no spicy chicken nuggets are worth the exploitation and abuse of farmworkers… https://t.co/nVh0GiYEqW
— FGCU SFA (@FGCU SFA)1557069519.0

Celebrities have a responsibility to use their platform, power, and influence responsibly. They can affect millions of people, and they can incite real change, so they should be very careful about what they choose to endorse.

Luckily, one celeb knows where it's at.

It is always important to speak out. It helps people to learn and shows that people can't get away with whatever they want. Amy Schumer points out that Wendy's does not protect their workers, and so we should be boycotting them or demanding that they change, rather than just promoting their products for them.

But for most people, it's the nuggets that matter most.

Most people are ignoring the human cost and just enjoying the return of their favorite snack. It's hard to confront difficult situations in life, and it's easy to brush them under the carpet and continue with life as normal. And that's only made more difficult when it is about something as delicious as Wendy's spicy chicken nuggets.

We can use the internet to make great positive changes.

Whether or not it's a marketing drill, it does show the power of the internet. It also demonstrates that we should be careful about what we support. Chance the Rapper probably didn't realize that Wendy's has such a disgraceful track record. Hopefully in the future he'll start supporting ethical companies, as that can start to make a very positive impact on the world.