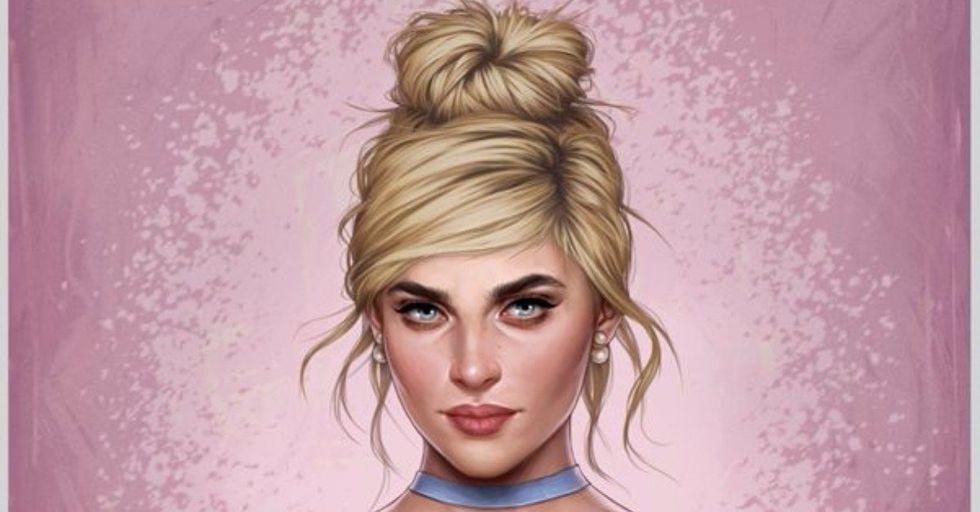 What is it about Disney princesses that captivates us so? Whatever it is, we're captivated even more after seeing artist Fernanda Suarez's latest series in which she modernizes a handful of our our favorite princesses. She says, "My main passion are portraits and characters, also creating my own interpretation of known fictional characters, games, movies, books and all things I love." We love it too. Check out her beautiful modern rendition of these princesses.

Belle is smart, fierce, and a book worm. This modern Belle captures all of that.

This one might be my favorite. (I may or may not say that about more than one.) Belle is brave and intelligent and creates her own destiny, a far cry from the damsel in distress archetype.

OK, so she looks like the head of the mean girls squad in some high school nightmare. But maybe that's why her stepmom tried so hard to keep her down? No way her own daughters would stand out with this girl around.

Strong, confident, knows her way around the woods. This modern Pocahontas is fierce AF and I'm a little in love with her.

OK, so maybe this one is my favorite.

Mulan is an outrageously badass character and I think Suarez captures that beautifully. So beautifully that I can't imagine this woman passing for a man, but if anyone can do it, Mulan can.

This Jasmine is everything Jasmine always should have been.

I can't figure out what's in the cat's mouth, but who cares because ZOMG look at Jasmine! I know she's a cartoon drawing, but I'm jealous of that thick messy braid she's rocking. My hair could never do that. Sigh. This might be my favorite. Keep scrolling for more!

Is it just me or is this Lindsey Lohan?

I'm conflicted about Ariel. On one hand she's passionate and curious, but on the other she gives up her life and very voice for the chance to catch a cute guy's eye. Come on! We don't have to change every single thing about ourselves to fit into a man's world. But this version of the mermaid seems to have more going on. Sure, she gave up her world, species, and birthright, but she's no door mouse. She's going to make sure Eric learns to scuba dive so they can spend time with her friends and family too.

Ahh, Snow White. The Disney princess who is the least interesting.

It's not Snow's fault. Her movie is really old. She came to life for us back in 1937 when the animators didn't find her individuality essential enough to even really give her a finished face. Seriously, in most screen shots she just has doe eyes, a pouty red mouth, and barely a suggestion of nostrils. She has no jaw line or nose. I don't know why that mirror thought she was so gorgeous. Anyway, this new version is someone to contend with. I get it now. She's the fairest. I wouldn't want to stand next to her for photos.

Suarez's work is garnering some much deserved attention.

People are universally loving her reinvented princesses. And hoping she'll continue the series.

Fans make requests for her to reinvent their favorite princesses.

Suarez has suggested that she has more princesses in the works and is welcoming suggestions from fans. She said that she's considering Nala and Aurora. Can't wait to see them!

Her other work is equally impressive.

Suarez isn't limited to princess portraits. Her collection is vast, varied, and impressive.

This isn't the first time Disney princesses have been reimagined by an artist.

Suarez lets her fans see the magic behind the images.

She makes it almost look easy. (This looks not at all easy.)

I know who I want to see next.

What Disney princess would you like to see the modern version of?