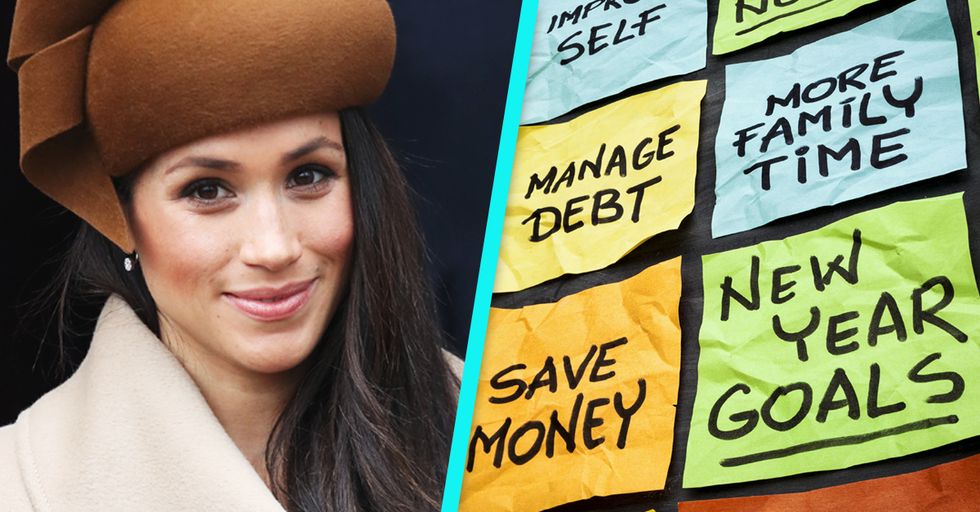 Whew! We made it. It was a little touch-and-go there for awhile, but here we are in a brand new year where almost no bad things have happened yet.

Now is the perfect time to make resolutions, so the 2018 version of you is the best one yet. When making our resolutions, we like to people whom we admire for inspiration. This year, we're looking at Meghan Markle. She seems to have things figured out, what with being engaged to a prince and all. We did a little Internet sleuthing and managed to find some of her New Year's Resolutions — and we have to say we're pretty darn inspired!

Maybe you want to work out more often. Maybe you're trying to take up a new hobby like baking or knitting. Maybe you just want to be happier in general.

Or maybe you just want to be like Meghan Markle.

And honestly, we get it. She's in a pretty enviable position these days. Sure, she had to give some things up to get to where she is today, but it seems like those sacrifices were worth it.

If you do want to be like Meghan Markle, then we have good news.

We found her New Year's Resolutions. Now, fair warning: These are her resolutions from 2016, but they are just as applicable today. Long before Markle was Prince Harry's betrothed, she started a lifestyle blog known as The Tig. The blog is now defunct, but you can still access the archives. It was on New Year's Day of 2016 that she wrote about her resolutions. In fact, she says, these are the same resolutions that she's had every year. They may seem pretty standard at first, but she completely flips the script and surprises us at the end.

The first one? Run a marathon.

This is something that's likely on many people's goals for the new year. Being able to run 26.2 miles (or really any number of miles) is super impressive. Exercise is one of those things that people say is important. Plus it makes you feel great, so we get it.

Resolution No. 2? Stop biting your nails.

Yep, yep. That all makes sense. (We're guessing now that Markle is wearing that incredible engagement ring, she probably wants to keep her nails looking extra lovely. There are way more close-up photos of her hands now than ever before!) But this next resolution involves something that the Queen would probably find quite unbecoming of a member of the royal family.

Resolution No. 3: Don't swear so much.

"The swearing comes in lulls triggered by being overworked or feeling mighty cheeky after a couple drinks," Markle wrote back in 2016. We get it, girl. We're right there with ya.

Finally, Markle wanted to re-learn the French she took in high school.

She writes that she lost most of her French after immersing herself in the Spanish language while staying in Buenos Aires. OK, that one's not really a problem that most people have, but learning (or re-learning) another language is a very valuable skill. Not a bad plan to have for the new year! But then, Markle completely surprises us.

"This year I resolve to not have a resolution," she writes.

Sorry, what?! But she stands by the decision. She says that even though she's made the same resolutions every year, the marathon has remained un-run, her nails remain bitten, she still curses every so often, and her French is still rusty. "If I toss out a four letter word once in a blue moon, well frankly I think it adds character," she writes. We agree.

Markle says that she received some excellent advice regarding New Year's resolutions from her friend Gina. As Markle was rattling off all her many plans for life, Gina interrupted her saying, “Meg, I will just say one thing. Make sure you leave room for magic."

That really stuck with Markle, so she decided to apply it to her "resolutions" for the new year. "My New Year’s resolution is to leave room for magic. To make my plans, and be okay if they sometimes break. To set my goals, but to be open to change. To let the magic know that there is an open door policy with me in 2016 and that it is always welcome to join the party."

And you know what? That resolution from 2016 seems to have worked out pretty well for her.

After all, it was in 2016 that she began dating Prince Harry. Clearly, leaving room for magic seems to be the right idea. So let that be a lesson to you as you make your own resolutions — marathon-related and otherwise. It's good to have goals, but always leave a bit of room for magic. Who knows what could happen if you do?