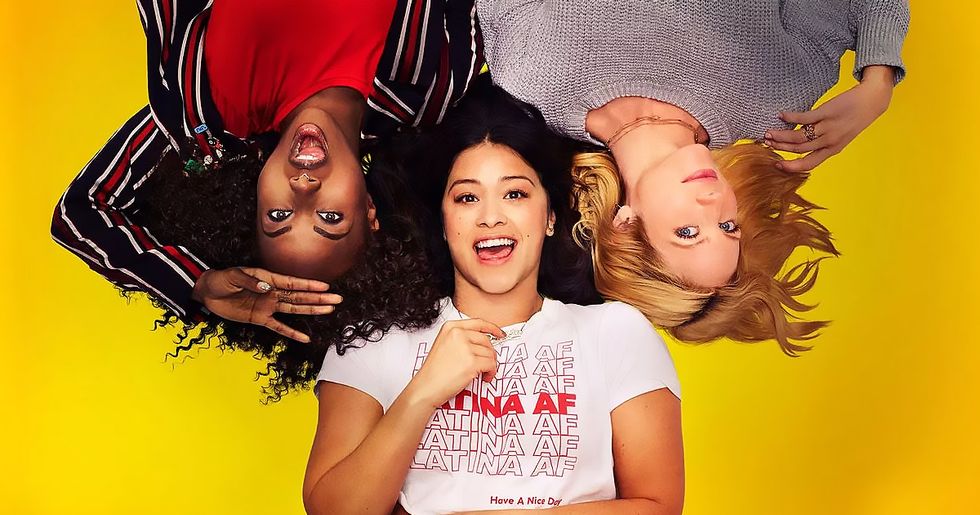 Netflix is absolutely killing the game right now with recent TV shows and movies, introducing unique storylines, highlighting diversity in their casting choices and overall making amazing content that everyone is obsessed with. They are showcasing characters with real-life problems and relatable AF situations, and they are just getting started.

A new movie is hitting Netflix and everyone is already a huge fan just based off of the trailer. The producer of the dearly-loved movie Bridesmaids, that is still a top favorite for a lot of people, has teamed up with powerhouse director Jenn Kaytin Robinson to make a new movie called Someone Great and we can't help but think everyone is going to love it.

With a strong female lead and a diverse cast, we already feel attached to the characters. Someone Great has an authentic storyline, top-notch millennial humor and a theme of true sisterhood and undying friendship – it's the love story we so desperately needed.

We're thankful for the movies that highlight sisterhood.

When Bridesmaids was released in 2011, it was an instant hit and it has only grown in popularity since. It wasn't just the humor (which is top notch, to say the least) that stole the hearts of so many viewers; it was the empowering and emotional testimony to the strength of female friendships.

It's an iconic film.

There's no way this movie wouldn't be incredible simply because everything Kristin Wiig does is amazing. Plus, Maya Rudolph, Melissa McCarthy, and Rebel Wilson? There's no way to fail with a cast like this.

A different kind of love story.

There's so much to love in this movie, and I'm not talking about just the humor and killer cast. It's a love story, but not between man and woman, but between best friends, showing the bond between friends that can overcome any adversity.

If you don't know who Paul Feig is, you need to.

Paul directed and produced movies like Bridesmaids, The Heat, A Simple Favor, and the new Ghostbusters. He frequents working with powerful and hilarious female actors and clearly has an eye for clever storylines that push for female leads.

He just gets us.

In the airport lounge and I just saw a dude eating a vegetable salad that he crumbled a chocolate chip cookie on to… https://t.co/jQ1tKNiJe3
— Paul Feig (@Paul Feig)1551236542.0

Paul is hilarious himself and feels social angst, just like the rest of us.

Most of the movies he's been involved with highlight diversity and has a female lead or a dominantly female cast.

Jenna Kaytin Robinson is a director, writer, and hilarious genius who is about to release everyone's new favorite movie.

Jenn wrote the MTV series Sweet/Vicious which tells the story of two girls who seek revenge on the men at their college who've sexually assaulted women. It's pretty hardcore and does an incredible job of highlighting how important it is to address sexual assault on college campuses.

We love her already.

She really speaks our language, and we are so excited about whatever she produces next.

Jenn and Paul decided to work together.

These comedic geniuses joined their femme-focused forces to create something great, or should I say, someone great...

"Someone Great" is about to be a new favorite!

The poster alone already has me convinced that I'm going to love it, and I'm not the only one who thinks that way.

We've got a killer cast.

Starring Gina Rodriguez from Jane the Virgin, Brittany Snow from Pitch Perfect, and introducing Dewanda Wise, who is about to be your new obsession.

It's not just another love story.

Gina Rodriguez's character Jenny gets a new job in San Francisco, which leads to the devastating end of a 9-year relationship. The movie shows one last night in New York City with Jenny and her best friends Erin and Blair.

These women are about to kill it.

Yes, it's a break-up movie, but it's also a put-yourself-back-together movie. The trailer shows how important friendships, especially in hard times.

She want it, she got it.

Jenn was inspired by watching a lot of movies that she felt missed the theme of sisterhood and the strength of female friendships. So, she wrote one herself. If this isn't a major power move, I don't know what is.

So much to rejoice about.

Feig was excited to announce his collaboration with Jenn and the power team was pouring out the love and support they had for one another.

The producer/director relationship is an amazing thing and these two were incredibly supportive of each other and proud of the work they created together.

This really is a gem.

Brittany Snow expressed her gratitude towards the film and was proud to be a part of something as beautiful as this movie.

I'm busy for the entire month of April if anyone asks. I'll be glued to my computer, rewatching this movie for weeks.

So @JennKaytin created one of the best show with Sweet/Vicious and now she’s coming for my neck with #SomeoneGreat. https://t.co/XRqShzoCQ2
— arianne (@arianne)1551891642.0

Fans of Sweet/Vicious, Jenn's series on MTV, can't wait to see more work of her work and are anxiously waiting for this movie to come out.

Gina has already made huge strides as a Latina actress, winning a Golden Globe for her role in Jane the Virgin, and a lot of her Latina fans are looking forward to seeing her as the lead role in a Netflix movie.

Bring on the tears.

I can already tell by the trailer that this is going to be a pretty emotional movie. I need my girlfriends and a bottle of wine to sit and make it through this.

Getting my tissues ready.

I have a good feeling I'm going to be a hot mess when I watch this and I am very okay with that!

In an Instagram caption where Snow shared her excitement, she also said the script alone made her emotional. "This was the funniest script I’ve read while also making me ugly cry. The women in this film became my lifelong friends and inspired me in ways I can’t describe."

Gina was all in for this film.

In an interview with Elle Magazine, Gina shared how swept off her feet she felt by the script and how working with Jenn was an amazing opportunity.

"Jennifer wrote an amazing script. When I read it, I was like, I want in. Jennifer Robinson will be a huge director," Gina said in her interview. "She's a leader. She's not nasty. She's kind, she protects the actors. She protects her crew. I am so proud to call her my friend and my fellow artist."

Plus, these ladies have some history.

Gina and DeWanda are best friends IRL and met when they were attending NYU together. They've been friends since they were 17 so their chemistry on screen is the real deal.

Some people have had the chance to view an early screening and the reviews are in: it's a really great movie.

The soundtrack is about to be amazing.

Jenn gave a little shoutout for the music and I'm eternally grateful because I think I found my new anthem.

This song is going to be on repeat! I can't wait to hear the rest of the soundtrack.

Anyone else excited to peak?

I feel like these characters are going to be very relatable and I can't wait to see how the story of  Jenny, Erin, and Blair shows everyone how important female friendships are.

We stan for diversity.

A LOT in the #SomeoneGreat Netflix trailer that I already love, but VERY HIGH on the list is DeWanda Wise making ou… https://t.co/kTAukco68C
— Carmen Phillips (@Carmen Phillips)1551895082.0

Those who viewed the trailer are already grateful for the choice of characters and that this movie is highlighting beautiful diversity and choosing women of color to play lead roles.

"This is destiny. You are Beyoncé." #SomeoneGreat starring @HereIsGina already looks like the empowering breakup co… https://t.co/cIq4gWsKk8
— NYLON (@NYLON)1551914581.0

This movie has such great potential and we can't wait to see it for ourselves.

We can start the countdown.

The movie is being released on Netflix April 19, and that date just can't come any sooner.

Grab your girlfriends and get ready for a perfect movie night.

Share this with your girls to hype them up about this awesome new movie!