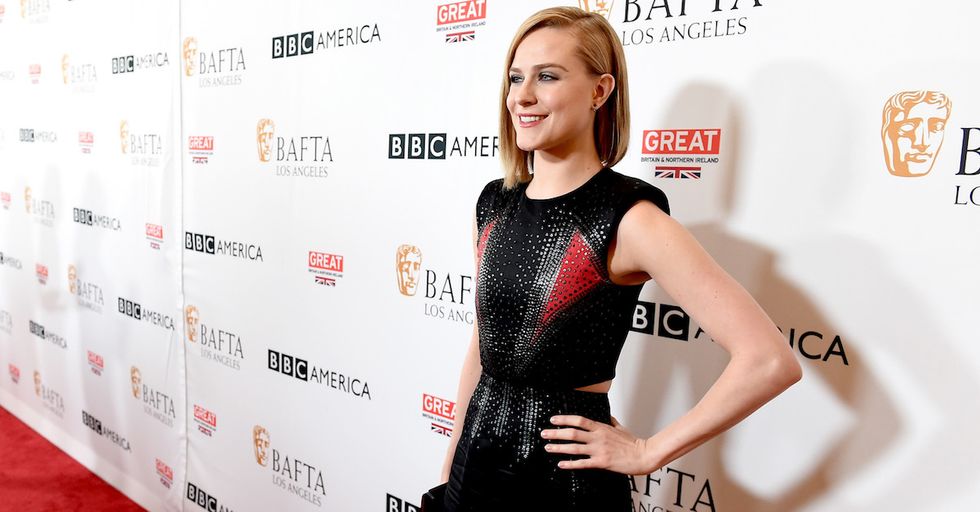 The star of HBO's Westworld came out as a survivor of sexual assault last year. And in a video she recently posted online, she addressed all the reasons survivors often take a long time to come forward. She also spoke candidly about sexism in Hollywood, and the world, calling on others in her industry to take action.

Wood's character in Westworld suffers sexual assault, something that she's come out publicly as having suffered in real life as well.

"I imagined a story where I didn't have to be the damsel." #DayoftheGirl #Westworld @evanrachelwood https://t.co/ANu8ma1Jh8
— Westworld Gifs (@Westworld Gifs)1507719674.0

As she told Rolling Stone, "I mean, your demons never fully leave... But when you're using them to create something else, it almost gives them a purpose and feels like none of it was in vain. I think that's how I make peace with it. Westworld? Good God. I left so much in that first season and never looked back."

It was almost a full year ago that she shared this letter.

In it, she clarifies what she spoke about in the Rolling Stone interview, admitting that she was raped twice by two different men. She also talks about the way victims are often treated by society: being asked to "just get over it" or sometimes not even being believed at all.

The recent allegations against Harvey Weinstein have brought the issue of sexual assault, and how it's reported and dealt with in Hollywood, to the forefront again.

In Wood's video, she details how difficult it can be for survivors to even admit what happened to them. And goes into why she still has yet to publicly name her assailants, though she admits telling everyone she knows personally about who it was.

She notes that many of the men she knows about, including her own abusers, are very powerful.

She talks about seeing them win awards, and calls on the industry to do more to not celebrate - or work with - men who are known to abuse or harass women in the industry. Wood admits in the video that the power and influence these men command is part of why she hasn't named names herself: "My perpetrators were very powerful, very rich, very entitled, very narcissistic white men." After all, lawyering up for a lawsuit isn't free, or easy, even for a working actress, thanks to fears of being alienated and cut off from work.

Wood's hesitance is not at all unusual.

And she talks at length in the video about why. Noting that it took her seven years to even admit to herself that she had been raped, and that she's still in the process of dealing with it. Obviously, the idea of her claims being subjected to public, or legal, scrutiny is not something she likely feels ready to face. Of course, her point was made for her by the reactions her video got.

She received support from other celebrities.

@evanrachelwood much respect. Thank you for speaking your truth.
— ADAM LAMBERT (@ADAM LAMBERT)1507828334.0

But of course there were still plenty of people on Twitter questioning why Wood wouldn't come forward, even for the sake of protecting future victims. Of course, going after a rape survivor for not doing enough to prevent rape doesn't make a whole lot of sense. So this led to a flurry of controversy on Twitter.

People were quick to correct those who thought Wood was responsible for things her accusers did.

Fans defended the star's decision, noting that it was not her fault her abusers chose to hurt people. These are powerful men able to hold down big jobs who are clearly capable of making the decision not to hurt others themselves. So of course, they're the only ones to blame for their actions.

Even other victims spoke up in her defense.

She noted that many women who do come forward face even more scorn than the men they accuse, which, in turn, can re-traumatize a victim who is already dealing with the horrible thing they suffered.

Luckily, the responses to her video are proving that plenty of good people are still on Twitter.

She's receiving all kinds of support from followers, who note the video is a great rundown of the entire complicated mess of what it means to be a survivor. And gives a great run down of what men can do to help.

She calls on men to educate themselves.

Not just by reading what's available online, but also by asking the women they know if they have any stories. She notes that most of the women they ask will probably have a story or two about a time they were harassed. But maybe they don't bring it up because they don't really think anyone cares.

The video is just one of many responses to the Weinstein allegations that are inspiring people.

Over the past week, women on Twitter have been coming together to share their stories and call for change. It seems like now, more than ever, there is a chance for real progress in the way women are treated, both in Hollywood and around the world.