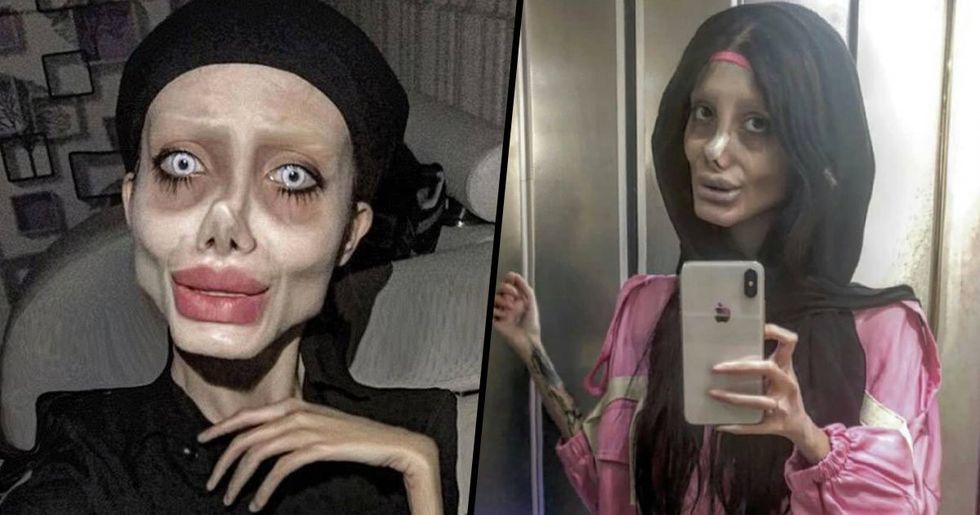 Earlier this week, we reported on the shocking arrest of Instagrammer, Sahar Tabar.

Tabar has become well-known across social media for her unusual appearance - it was speculated that she had undergone over fifty cosmetic operations - and the Insta star has been arrested by the Iranian authorities, accused of blasphemy, inciting violence, and corrupting youth through social media.

This isn't the first time that the Islamic State has thrown an Instagrammer in jail because they do not follow their oppressive rules. Despite the clearly unfair treatment going on here, many have dismissed the case because of Tabar's appearance, which has been likened to Angelina Jolie and Tim Burton's Corpse Bride.

Whilst I don't believe that whatever surgery she may or may not have had should weigh in on this case of government oppression, I think that these new photos will change some people's minds on this case. The new photos that have emerged reveal what Sahar Tabar actually looks like.

Continue scrolling to see the Photoshop and make-up free snaps.

Perhaps understanding that the Islamic State of Iran's cyber policing has led to the arrest of a "normal" looking young woman, people will take this whole thing more seriously.

As you can see, this young woman certainly appears to have an unusual look.

With people debating what inspired Shahar Tabar's look, the Instagrammer has collected a variety of fans, mythologizing who she is and what she stands for.

It has been speculated that the twenty-two-year-old got lip fillers, liposuction, and a nose job made her look like Hollywood A-lister, Angelina Jolie.

In many of the Instagrammer's posts, she does not wear a hijab. You could argue that taking a photo at home, where you are allowed to not adorn a scarf, is perfectly acceptable. You could also argue that sharing it in the public sphere of Instagram goes against the Islamic State's regime.

The murder of the Iranian blogger resulted in a public outcry and human rights organizations across the world spoke out. The government was forced to lead an investigation. The public demanded that the Chief of FATA Seyyed Kamal Hadianfar was replaced, but after much agro, nothing changed. FATA continued its online censorship and nothing could be done.

Hojabri's face was apparently obscured, but it was clear that she was tearful as she expressed her deep regret for posting the "inappropriate" dance videos to Instagram. The Instagrammer, who had over sixty-thousands followers prior to her arrest, has now completely disappeared. She has totally vanished from the public eye and her whereabouts remain unknown. The parading of the young woman on television caused outrage but this did nothing to prevent the government from furthering its surveillance on social media.

Women should be free to paint their faces, dance in their bedrooms, and do whatever the hell they want.

We hope that Sahar Tabar is in good health and is released soon. We hope that this young woman does not disappear like Maedeh Hojabri or get murdered in custody like Sattar Beheshti. Despite whether you think Tabar is strange or peculiar, in reality, she is a normal, vulnerable Iranian girl.

I think it's safe to say that Sahar has had some surgery. But, in Iran, that it is much normal than it is here in the U.S. Iran actually has the highest rate of nose surgery operations in the world. The Guardian reported in 2013 that over two-hundred-thousand women in Iran get nose jobs each year.

"Displaying our 'art' on our faces."

Part of the reason that women in Iran have been getting an increasing amount of cosmetic surgery, primarily nose jobs, in recent years is due to a backlash following the revolution. Now that women in Iran are forced to wear the hijab and their fashion choices have been limited, they are seeking alternative ways to express themselves. One Iranian woman who spoke to The Guardian said: "It's human nature to want to seek out attention with a beautiful figure, hair, skin … but the hijab doesn't let you do that. So we have to satisfy that instinct by displaying our 'art' on our faces."

Aspiring to have freedom.

The fashion for Iranian women to get surgery to reduce the size of their nose and have the tip turned upwards is often seen as an attempt to westernize themselves. Western fashion has been banned from Iran since the revolution; even jeans have been banned. If Iranian women are "westernizing" their faces, it could be seen as a quite a political act.

The nose job situation in Iran is fascinating.

Now that it has bled so deeply into the mainstream of Iranian culture, it is even seen as a status symbol, to prove that you can afford to get one.

Oppression has destroyed the self-esteem of many Iranian women.

Bxeauty standards and the insistence that the most important thing that Iranian women can achieve is bagging a husband has also led to the rise in cosmetic surgeries. A psychiatrist and family counselor, Reza, explained: "Some may have had tense, problematic childhoods. Thus they suffer from low self-esteem and resort to these surgeries because they think it will lead to a better, more enjoyable social life." With surgery being so popular, there is a common belief now that, if women don't undergo surgery, they will find it more difficult to fit in and their god-given nose will suggest that they come from a poor economic background.

Now how do you feel about Sahar Tabar?

Understanding how prominent cosmetic surgery is in her culture and appreciating the Iranian woman's plight to achieve a sense of self-expression and freedom, can you see how terrible it is that she has been arrested?

Whatever you feel about her work as an artist, this is about human rights being violated.

Sahar Tabar, a famous Iranian figure on Instagram who has millions of followers, was arrested by police. She used h… https://t.co/CtVV6q6zH5
— Reshad Shams (@Reshad Shams)1570372704.0

As you can see from the image on the right-hand side, behind the makeup and Photoshop, Sahar Tabar is an ordinary-looking girl. The Iranian media is using her photos of artistic expression to vilify her in the media, in an attempt to alienate anyone from supporting her.

Tabar remains in police custody and the authorities have made no indication as to whether she will be free anytime soon. We cannot ignore the repeated oppression of women by the Islamic State of Iran. Continue scrolling to learn about how Joss Stone was booted out of Iran earlier this year...