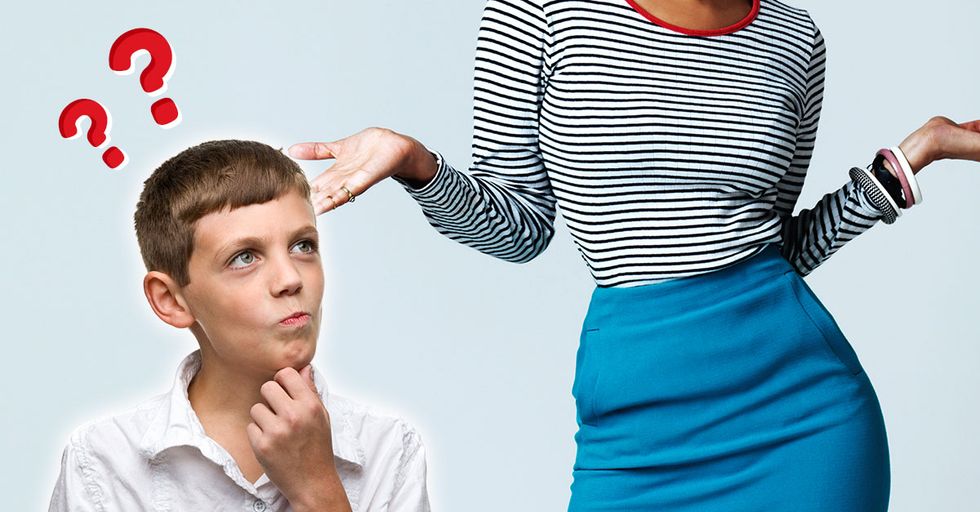 Children’s Book for Boys Tries to Explain the Purpose of Boobs... and Fails Miserably

What are boobs for?

One children's book author got the answer to that question really, really wrong.

Alex Frith's puberty book, Growing Up for Boys, came under fire recently when one dad posted a screenshot from the book along with Frith's inaccurate sexist description about the purpose of women's breasts.

We think we know what you're thinking... and it's as rage-inducing as you're imagining.

Growing up, there was no shortage of books like What's the Big Secret?

For moms and dads who went red in the face at the thought of having "the talk," or for kids who lost the ability to speak when the prospect of asking their parents about puberty or sex came up, these books were a great way to learn the ins...and outs...of the human body.

The best part of these books (besides not having to have awkward conversations with your parents) was that they assured you that everything that was happening to you was "perfectly normal."

Puberty is a tough topic to learn and talk about, especially when you're actually going through it yourself.

Fans of American Girl Doll books totally remember The Care and Keeping of You.

Remember lying on your bed, flipping through the pages of cartoon naked bodies, with their armpit hair and leg hair and everything flopping about? Good times.

Talking with boys about puberty and sex isn't often as easy as it is with girls.

That's because toxic masculinity is a thing — boys are not supposed to be vulnerable. They're not supposed to be curious and unsure. They must appear confident and full of conviction all the time. Hopefully, that will change. But for the time being, it's especially important for boys to be able to turn to books when they don't feel like they can ask an adult about something they're experiencing. Published by Usborne Publishing in the U.K., Growing Up for Boys by Alex Frith seemed exactly like one of those books.

Until the part where Frith writes about about what girls' breasts are for.

This book gets women's breasts so wrong it's really unbelievable that it was even published in the first place. A book that was supposed to be a helpful, safe space for boys is actually an inaccurate, sexist, tone-deaf tome. It's like, really really bad...

U.K. dad blogger who runs the Facebook page Man vs. Pink posted this picture of a page from Growing Up for Boys.

"What are breasts for?" it reads. "Girls have breasts for two reasons. One is to make milk for babies. The other is to make the girls look grown-up and attractive. Virtually all breasts, no matter what size or shape they end up when a girl finishes puberty, can do both things."

According to Frith, one of the purposes of girls' breasts is to "make the girl look grown-up and attractive." Are all the things wrong with this statement pelting you in the brain right now? Yeah, us too. First of all, breasts are in no way inherently sexual. Their purpose is to feed babies. The fact that they are considered "attractive" is an entirely socialized phenomenon. Second of all, girls' breasts should in no way be considered attractive by anyone, let alone a pervy male children's book author. Shudder. Up the spine. Seriously.

While the book was published in 2013, its infamy is new.

And people's thoughts are reflected in the book's Amazon reviews. "This book tells boys that breasts are for making milk and also 'to make girls look grown-up and attractive,'" one reviewer wrote. "While their growth does indeed signal sexual maturity, their purpose is feeding babies. To suggest that they're some sort of ornament, there for SOMEONE ELSE'S benefit is horribly sexist and only serves to perpetuate the myth that women's bodies are not their own. Do better, Usborne."
Buy Now

"This book is ill written trash by Alex Firth who thinks boobs are to make girls look attractive to men," wrote another reviewer.

"Not to mention to sheer ignorance and sexism that we shouldn't be instilling in future generations. It shows a lack of actual knowledge on the subject of puberty, which brings into question why it was even published in the first place."

"Utter trash," yet another wrote.

"[If] your intent is to raise a son who respects woman then skip this one." A spokesperson for the publishing company released a statement that said, "Usborne apologises for any offence caused by this wording and will be revising the content for reprinting." How about revising the way we think about girls' bodies altogether, eh? Still, there were some who didn't get what all the fuss was about...

"This is actually true," one commenter wrote on Man vs. Pink's post.

Ms. Zinnia Flowerbud really did try to explain herself, but Man vs. Pink came back with a blessedly succinct and powerful rebuttal: "Attractiveness is not a 'purpose' of breasts. The only 'purpose' is to produce milk. Any attractiveness is learned, cultural behaviour."

"What's the problem?" another commenter asked.

"A woman's breasts are gorgeous and help to show how beautiful the female form is." It's not a problem to recognize that women's breasts can be beautiful. What is inaccurate and harmful in so many ways is to tout beauty as the purpose of breasts. It suggests that women's bodies exist to please men. It suggests that women without breasts (yes, they exist) cannot be beautiful or attract a mate. It suggests that girls and women must display or flaunt their breasts in order to find a partner and that boys, in turn, should only be attracted to women with the right kind of breasts.

Luckily, there were plenty of commenters on the right side of the story.

According to this person, this isn't the first time Usborne Publishing has been caught perpetuating harmful concepts when it comes to boys and girls.

We must "move our kids away from the status quo," as this commenter wrote.

This story makes it clear that one, parents need to talk to their kids about this stuff. You can't leave it all to the books, and two, when you do supplement these important talks with books, make sure they're ones that disseminate accurate, up-to-date information, not backward, awful gender stereotypes.