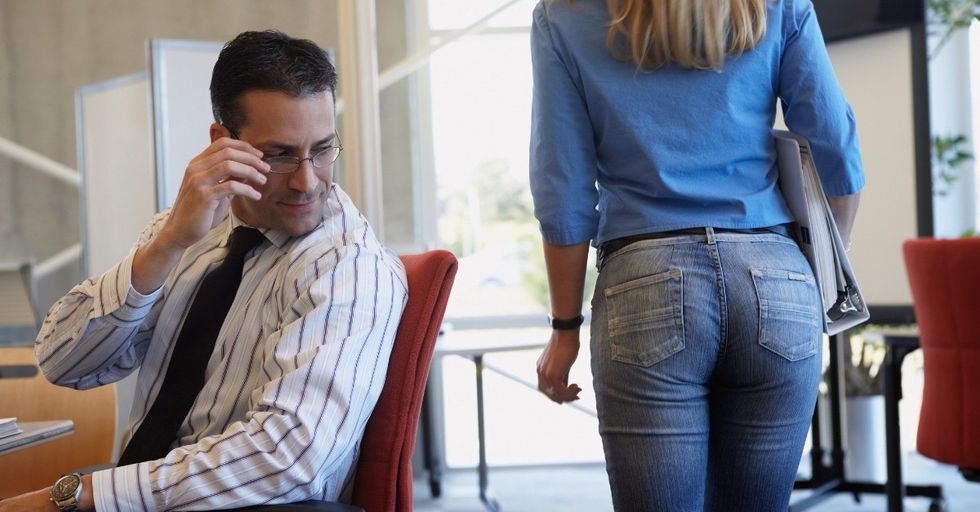 What Happened When One Man Tweeted an Impossibly Sexist Question? Thousands Took to Twitter to Take Him Down

Sometimes people say things that are so ridiculously idiotic and nothing happens. But sometimes, when those people say an idiotic thing on Twitter, the world responds with an epic clap back that shuts that idiocy right down.

And this is what happened when Twitter user, Joe Sweatpants, decided to take his very sexist ideas public.

Here's the original Tweet. It's an awful attempt to put down women.

For some reason, Joe Sweatpants thinks that it's his right to stand around and enjoy women's bodies. Well, it isn't. And Twitter was having none of it.

Some responses focused on the idiocy.

Excellent point. We have bigger fish to fry, people. Real and terrible things are happening to people all over the world. Whether or not you like every bottom that passes you by is not an actual problem.

Others tried to educate.

@iamTruSpeech Just a general rule, we're relieved when we walk past a group of guys and they leave us alone
— Gemma Pettersen (@Gemma Pettersen)1506662331.0

Maybe Mr. Sweatpants just doesn't know that women are people who simply want to go about their day. Well, women are people. It turns out people sometimes go out in public. People all have butts. Butts come in all shapes and sizes. Your opinions on any and all butts matters to no one.

Still others seemed to want to help a guy out.

YOU'VE MADE A TERRIBLE MISTAKE. GET OUT. Very few people found it within their hearts to side with Joe Sweatpants, or to throw him a lifeline. But a few did.

But, for the most part, people took the opportunity to tell all the sexist jerks in the world exactly what they think.

Oh, and it feels so good. What followed was a veritable tweetstorm of slap backs, comebacks, smart assery, and personal attacks on Joe Sweatpants, who, it turns out, really can't grow a beard. And people did NOT hold back...

Most of all, it was memes of women walking with ALL SORTS OF ATTITUDE.

How do we feel? Generally, it seems that we feel gorgeous, confident, super bad ass, and a whole lot better than you. We swagger and we strut. We flip our hair and we balance in dangerously high heels. And we do it all without one thought about what Joe Sweatpants thinks.

Some people are clearly fed up with this brand of overt, outlandish sexism.

Yeah! How about that? Shocking concept, right? WE ARE NOT WALKING BY YOU FOR YOUR PLEASURE.

Really, how fragile is your day?

Joe Sweatpants needs a bit more going on in his life if a stranger's rear end can destroy his day. Then again, if his Tweet is really representative of his life, judging passing asses is as close to female companionship as he's going to get, so his life is as sad and empty as it seems.

Tell us more, Joe, we really care about your opinion.

Oh, Joe Sweatpants, of tiny mind and stupid heart, you messed with the wrong half of humanity. Look around, Joe. Women and men are calling you out for your ridiculous sexism. You've chosen the wrong path.

This did not go the way he expected.

@iamTruSpeech What I love about this is the people (rightfully) clowning you are getting way more of the RTs you we… https://t.co/D0UQk47kPp
— blkwmndirectors (@blkwmndirectors)1506699208.0

Somehow, he thought he was hilarious and that people might agree with him. Instead, nope. One unflattering photo of Joe's scraggly beard has been retweeted nearly 2000 times. Probably not the outcome he was hoping for. And the clap backs kept coming...

Ouch. Maybe it's time to look inside, Joe. The problem is within.

It's time to stop looking at the derrières of passersby and instead take a hard long look within. Joe, what happened in your life that led you to such a misguided sentiment?

True fact. There is no question.

The attacks on Joe were frank and brutal. People did not hold back. At all. And we're just fine with that.

Preach!! Can we get an Amen?

@iamTruSpeech Boy sit down , imagine us females having to walk by a group of fucking Dogs that are gonna act bad an… https://t.co/tYa8QCqqfR
— ☾✟♡kriptonite☾✟♡ (@☾✟♡kriptonite☾✟♡)1506669474.0

We're not trying to attract your type, Joe. Literally none of us are. That's the problem isn't it? All that rejection has caused you to lash out.

Seriously, how powerful are women if we can DESTROY lives with our asses?

Think of how much we can accomplish with the rest of us! Sorry, Joe. Today was not your day. Maybe next time pick a fight with a more suitable opponent. Like a rock.

We mean, not that it matters but...

@iamTruSpeech How do you feel looking like the offspring of Mr.Potatohead and the living embodiment of the movie nerd cliché?
— Pretty Pennywise (@Pretty Pennywise)1506653448.0

Glass houses, dude. We won't stoop to post the picture of the scraggly beard, but trust me, it's not good. But, we know that Joe's beard is does not exist for my pleasure. Nothing about Joe Sweatpants and his ilk exists for our pleasure.