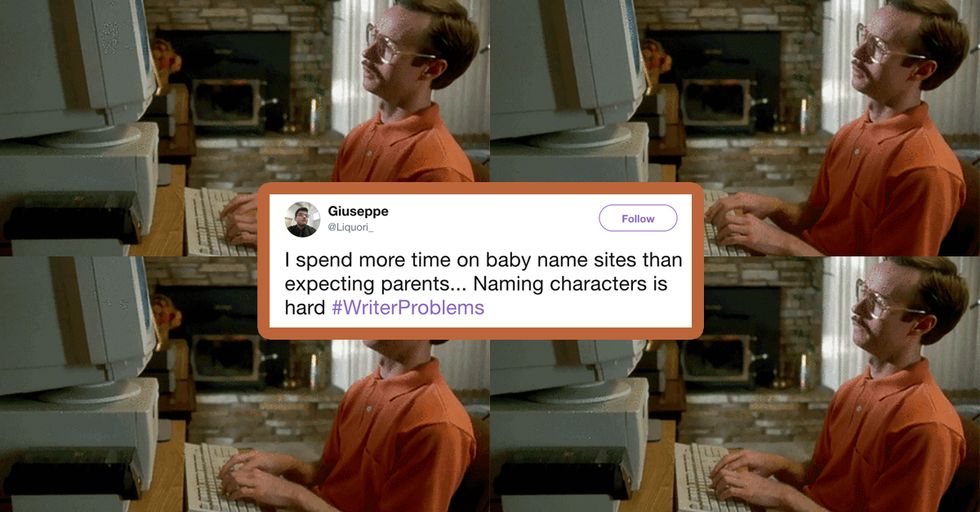 Funny Tweets About What It's Really Like to Be a Writer

When you imagine what it must be like to be a writer, I'm guessing that a very specific image comes to mind. Perhaps you're imagining someone bent over a typewriter, surrounded by cigarette smoke and half-empty bottles of liquor, furiously typing away at what will eventually become the next great written masterpiece.

But in reality, being a writer is pretty much nothing like that. Ask just about any writer. For most of them, doing their job consists of sitting in a room looking at their computer screen for hours and maybe writing a few words at a time, or watching the cursor blink all day on an empty page. The life of a writer is hardly ever as glamorous as most people assume, but that doesn't mean it isn't very rewarding.

After all, writers create things that last forever for millions of people to enjoy. That's pretty darn cool.

If you're a writer, you know how it is.

And if you're not, then you're in luck! These tweets will tell you everything you need to know about what it's really like to be a writer.

Can you really be expected to write anything if you don't have enough proper writing utensils? Of course not!

There are a lot of ups and downs in writing. It's just part of the deal.

Obviously, you were referring to when sheep lick you. They're giving you a kiss. I don't see the problem here.

Baby name websites are such a great resource for character names. So are phone books, movie credits, and old yearbooks!

I mean, you already bought those pens, so what are you going to write in? A stack of 15-20 notebooks should do it.

If you're feeling stuck, why not consider throwing some shark-related natural disaster into the mix? I don't think anyone's done a shark earthquake yet.

Taking a shower can be the best thing to kickstart some brand new ideas about your WIP (work in progress). It's also the best place to rehearse your eventual prize award speech.

No mirror is safe.

This is what happens when you have a room of mirrors and you’re plotting a book. #writerslife #amwriting https://t.co/1fUV6QQ3oT
— Kristine Akenson (@Kristine Akenson)1540241218.0

Actually, no flat surfaces are safe. Not even your floors!

Most of these names sound like hard-boiled detectives. I would read about any of them.

And we all know the answer, right? Call it "research."

It's on the tip of my tongue.

Quick! What's another word for "book that contains other words for common words?"

To be fair, there is some smiling, too. But yeah, most wailing.

One quick thing before I start.

Hey, you need the environment to be perfect, right? It might take a couple minutes to get settled. Or a few days.

Also, you can never see what I've done because I'm never going to show it to anyone. Not even myself.

So you know, most writers dread this question! But that doesn't stop people from asking about it.

See? It's not all ripping up pages of your notebook and screaming into the void. But, it's mostly that.

There are so many letters.

When you think about the fact that there are only 26 possible letters to use, the idea of writing a whole book doesn't seem that bad. There are only so many possible words out there, right?

You're a writer. You have a reputation to uphold.

Whose idea was "fuchsia?"

Fuchsia is one of the stupidest-spelt words in the English language. Why have a c? Get rid of the c & move the s there #writerproblems
— Dionne Lister (@Dionne Lister)1452750340.0

I have similar complaints about the words "jeopardy," "receipt," and "accommodate." Who do I talk to about this?

Have now looked at the word "raccoon" so many times that I no longer have any idea how to spell it #writerproblems #raccoon #racoon #rackoon
— Teri Wilson (@Teri Wilson)1451949317.0

I didn't have a problem with "raccoon" before this, but now I hate it as much as this person. Add it to the list!

When you find a name that sounds perfect for your character...then realize that you can't use it without feeling we… https://t.co/QORhmPUDHY
— Bea Brennan (@Bea Brennan)1540256115.0

Oh, that's easy. Tell the kid that they were named after your character!

Trying to be productive? Don't go on Twitter. It's the complete opposite of productive.

Writing is sometimes like cooking a meal. Sometimes, it’s quick and simple. Other times I feel like I’m preparing a… https://t.co/S5PfzG1mKQ
— jalessa.bettis (@jalessa.bettis)1540295727.0

At least when you cook, you get to eat your creation. You can't eat a book, right? No. You can't.

A little bit of editing.

Beware the overzealous edit! If you're not careful, you can wind up with your entire book on the cutting room floor. But, then again, it may be exactly what your book needs!

What is equally awkward, is when someone asks to read your piece and you have to weigh whether you want them to read the sex scenes knowing that you wrote them.

The moment you realize your Google search history would be very suspicious if the FBI ever looked at it. #writerproblems #amwriting
— Mandy Woodson (@Mandy Woodson)1451953344.0

Most writers' search history would raise a few eyebrows.

This will take forever.

It is a  miracle that any books have ever been published. I don't know how it ever happened. Share this with a fellow writer! And get back to writing!