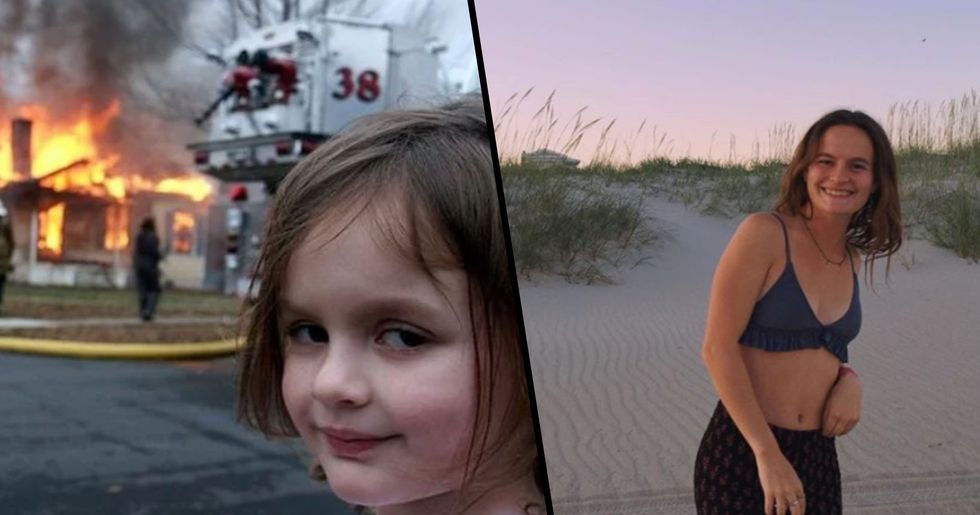 What the People from Your Favorite Memes Look like Today

You know them for providing perfect reactions to universal situations, and a reliable laugh even in dull times. But you may forget that behind these classic memes are real-life people, living ordinary lives in spite of a sliver of intense viral fame. So who are the people behind the memes - and what are they doing now?

We've tracked down twenty-one of the best to answers to these questions - keep scrolling to learn the stories behind the most recognizable faces of the past decade.

This iconic face has been around since 2007, and is the perfect way to celebrate even life's little victories.

The kid's name is Sam Griner, and his mom recreated the image in 2017 when he turned eleven years old.

His mom claims she originally disliked the meme, as it made her son look like a bully, but has now embraced it - although Sam still gets embarrassed from time to time.

This meme first surfaced in 2004, and was the perfect visual aid for those who just want to watch the world burn.

The "girl" in question is Zoe Roth.

The picture was taken by her father during a fire drill in their hometown of Mebane, North Carolina.

"I’d love for the meme to help me get into or pay for college somehow."

"But I ultimately want people to know me for me," Zoe explains.

In a now-viral 2013 video, one small child had a rather hilariously skeptical response to the announcement she was going on vacation to Disneyland.

The meme was a perfect response when someone needed to get taken down a peg or two.

Chloe and sister Lily have continued growing up online, with a joint Insta-account run by their parents.

Chloe seems to have mellowed a little in her old age.

Although a quick scroll through the page reveals she's still highly capable of giving her signature side-eye.

This excellent "IDK" response came from the Disney Channel show, Good Luck Charlie, which aired between 2010 and 2014.

The adorable toddler was played by actress Mia Talerico.

Talerico is still best known for this role (and meme).

But at her young age, she has a whole career ahead of her. We can only imagine the excellent meme content to come.

The fabulous dog photo became the backdrop to a million canine reactions since it surfaced in 2010.

Doge has a real name, though.

And although no image has surfaced that'#s as iconic as the original doge...

Back in 2012, YouTuber Laina Morris created a parody of Justin Bieber's "Boyfriend," and struck fear into the hearts of men everywhere.

And there's no denying she can still pull that terrifyingly hilarious face.

In 2012, a photographer captured this moment during the Cooper River Bridge Run, and the internet noticed something unusual.

One man in the image looked pretty amazing - particularly considering he was supposedly caught off-guard.

The man in question was Zeddie Little, and he quickly became a famous face in the meme world.

"I kinda feel honored to be part of a joke that's in good spirit because sometimes the Internet can be a little vicious or jokes can get bent the wrong way."

"But these are all kinda, for the most part, positive. It's funny that everybody is kinda taking a like to it. It's, I guess, the most flattering way to get spread across the Internet," he's said.

14. Trying To Hold A Fart Next To A Cute Girl In Class

This image went viral in 2014 when Redditor aaduk_ala uploaded it to the site with the now infamous caption.

The Redditor in question is Michael McGee.

He claims, "my take on being ‘internet famous’ is cool and all."

And when asked if he regrets being famous for the unflattering picture?

"I regret not copyrighting the picture right away because I could have made a lot of money there!" McGee laughs.

This snowshoe cat (real name Tardar Sauce) rose to fame in 2012 on Reddit, thanks to her signature irritated expression.

Grumpy Cat may have been the first animal Instagram sensation.

If you ever needed a reaction that signified deep annoyance, Grumpy Cat had your back.

The owners even capitalized on Grumpy Cat's fame.

Sadly, Tardar Sauce passed away earlier this year, but her grumpy legacy lives on, online, forever.

This infamous pic surfaced on Reddit in 2012 and became the backdrop to all manner of unfortunate situations.

The man in the picture is actually called Kyle Craven.

The original image (an outtake from a yearbook shoot) was uploaded online by a pal of Craven's.

And while he's not famous for a particularly cool reason ...

Craven estimates he's made over ten thousand dollars off of Bad Luck Brian merch - so perhaps he's not so unlucky, after all!

This image emerged online in 2012, and was the perfect reaction to any intensely overexciting situation.

She says she took the image back in fourth grade during an intense game of dress-up.

But if you look closely, she's still recognizable as the face of a classic meme.

The stock image of an unrealistically crying woman quickly gained traction once it was superimposed with some of the biggest non-problems out there.

We've all been guilty of it.

But it became the perfect way to poke fun at privilege wherever it cropped up.

Strangely enough, the star of the meme is actually a popular Italian actress.

Although Silvia Bottini is probably still best known for her role as a meme. We wonder how she feels about that?

This image of the quintessential douchebag came to fame on Reddit in 2011, and became the meme to back up any scumbag move.

The man behind the meme is Blake Boston.

The dodgy outfit was captured by his mother, although Boston claims to have no regrets about his internet fame.

Truly, the internet is a weird and wonderful place.

The reaction shot became an incredible response to any "shocking" moment since it was first recorded in 2013.

The man behind the meme was Drew Scanlon.

The game designer was shocked when such a tiny reaction became such a huge internet hit - but such is the nature of memes!

Now Scanlon is using his fame for good.

This image of the classic intimidating coffee shop worker went viral in 2011, at the height of the hipster coffee phenomenon.

The man behind the picture is Dustin Mattson.

And it seems he doesn't find the meme so funny. In at interview, he claimed, "I do find it discouraging and disappointing that there was so much exposure brought to an attempt at making a joke of a culinary industry and the professional barista."

"To me, it's very telling on how we laud farm-to-table food, craft beer, cocktail mixology, but it's ok to have no respect for the specialty coffee world and the people who are committed to it."

"On the other hand, the whole thing only makes me want to work harder at my job, make better coffee, serve my customers better, and bring more positive exposure to both the company I work for, the barista profession, and specialty coffee as a whole." For once, it seems the meme is actually 100% accurate.

The image first surfaced on Reddit in 2011, and became the perfect reaction to any moment of horrific realization.

In 2012, the face behind the infamous image came forward.

He posted the above image on Reddit, with the caption, "A true moment of clarity."

A classmate of the boy named him as Will G.

Although neither of these students are from Australia, where the original photo was taken - meaning it's still something of a mystery.

In 2016, a clip from Braziliantelenovela, Senhora do Destino became the perfect reaction image to depict total confusion.

The meme rose to fame particularly on 9gag, where it was imposed over all manner of puzzling situations.

Renata Sorrah continues to star in lots of Brazilian TV.

But it's likely confused math lady remains her most famous role to date.

This classic reaction shot rose to fame on Twitter in 2016.

And it quickly became to go-to response to anyone having an essentially kind of terrible idea.

Kayode Ewumi continues to work as an actor.

This incredible stock photo model rose to fame on Facebook for his unique facial expressions.

In 2014, the model in question identified himself on Reddit.

The stock photo model was discovered to be a Hungarian man named András Arató. That facial expression was undeniable.

He's still one of the world's best-loved memes.

In 2018, an Instagram user ran into him in Manchester, UK. He's even done his own Ted Talk!

This image was first posted to Twitter in 2018. It was posted by an Instagram star laughing at her own exhaustion after posing for a shot.

The image quickly became shorthand for overexertion, with captions like, "Me looking at the menu knowing I'm gonna get the same damn thing I always get."

Here's the woman behind the iconic meme.

Kalin Elisa is a popular Instagram influencer, whose reach has only been extended thanks to her ingenious meme.

Nephew of Vine star Nick Mastodon, Gavin, rose to fame on the now-defunct video app in 2013.

His facial expressions were ideal to capture doubt and discomfort.

After his Vine appearances, a YouTube video was launched of a compilation of Gavin appearances.

But his indisputed "made it moment?"

It has to be when most-followed Twitter user Katy Perry called Gavin her favorite celebrity! Want to learn more about a particular meme star? Scroll on for the incredible extended story of Blinking White Guy's charity mission. We officially love him!