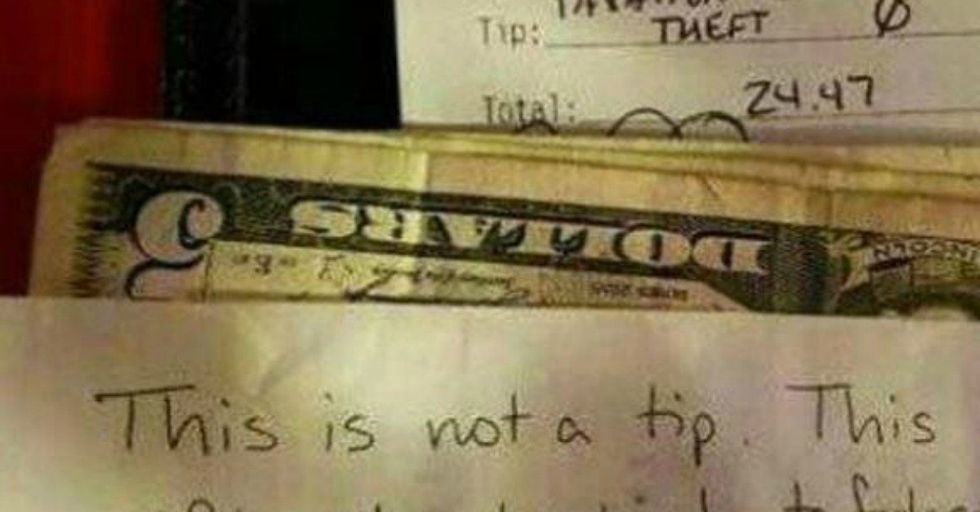 A picture has gone viral on Reddit that's sparking quite a debate about the process of tipping and taxes.

In lieu of a "tip," a customer at a Missouri restaurant gave their waitress a "personal gift" — in the form of cash — and wrote "Taxation is theft" next to the tip section of a receipt.

Tipping, for better or worse, remains a crucial part of the restaurant experience.

It's optional, but it's not actually optional. It's socially-mandated, which means many people work to do the bare minimum.

Some people hate it.

And not all of them are professional criminals. Regular folks can disagree with the concept itself or the fact that they just don't know how much to give to a server in an instance.

It's a reliable fount of controversy that's been tackled time and again in entertainment.

Just like anything else that involves money, it's relatable and everyone has an opinion on the matter.

So what's the point of specifying a "gift" to a server, as opposed to a tip?

A second note read: "This is not a tip. This is a personal gift and not subject to federal or state income taxes."

The debate comes about because when you give a waiter or waitress a "tip," that directly factors into their salary if they earn a tipped wage, meaning it's taxable. The federal minimum wage for tipped workers stands at $2.13 per hour.

If a tipped worker doesn't earn what they'd make under the federal minimum wage at the end of the week, the employer is required to pay them the difference.

But that doesn't always happen, and while some like the system, others complain about the inconsistency of their daily earnings.

At the end of the day, both tipped wage and minimum wage workers struggle to make ends meet, and if you've ever served, you can relate.

Working for tips is extremely hard, and almost everyone agrees the laws regulating it are unfair.

And yet they continue because, well, that's the way that it's always been done.

So the idea of gifting them a cash gift, rather than a taxable tip, is what's spurring this debate.

A common theme was that it's common practice for servers not to claim all their cash tips. As a former server myself, I can tell you that yes, I've seen that happen more often than not. That said, another server also weighed in...

It should go without saying that not claiming tips for tax purposes is illegal and could also put you at risk of being audited.

It brings us back to the question though — what about when the customer explicitly states that the cash they left on the table is a personal gift? According to the IRS, a gift would need to exceed $13,000 to be subject to the tax. And if you're getting a tip greater than $13,000, even with taxes taken out, that would be one hell of a tip.

And tips going all the way up to $13K are still a lot.

There's a whole universe of giant tips that still come in under that taxation threshold.

Remember to be generous. It's not just part of a meal for your server. It's their livelihood, and to play around with that is a pretty cruel practice.