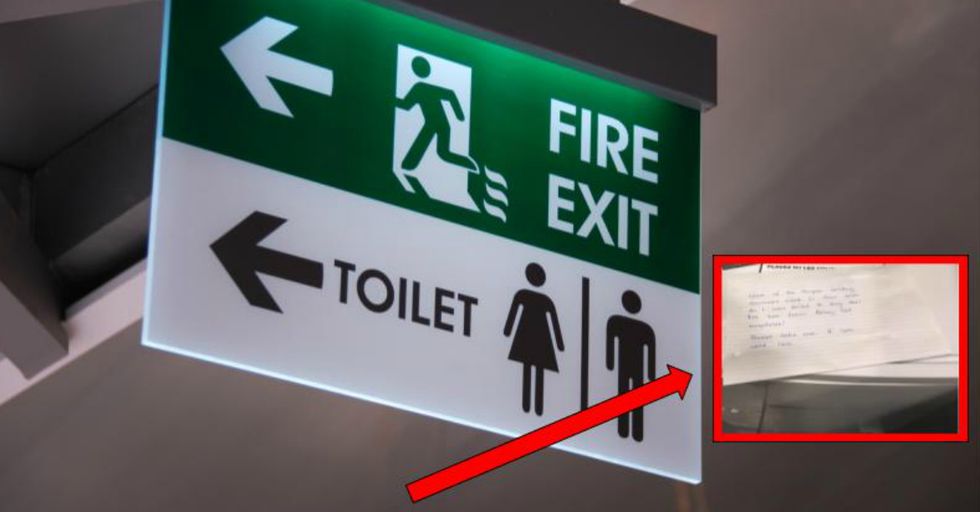 Anyone who has a period has been there: you’re in a public restroom and you realize you forgot to bring tampons in your purse. Suddenly, you’re facing an emergency situation. But not to fear! Surely the trusty tampon machine will save you! Oh wait, the tampon machine is not only from circa 1982, but also stuffed with what appears to be Taco Bell napkins sealed together with old gum. There are definitely no tampons in there.

Enter the Tampon Fairy, who comes to you in your greatest time of need and bestows upon you a single sanitary product.

OK, there is no Tampon Fairy (that we know of) but there is an amazing lady in the Calgary Airport who left a box of tampons for the women after her who found themselves in the same predicament she did. She also left a note that reads:  "None of the tampon vending machines work in this area so I was forced to buy these. $15 box from Relay. Not acceptable! Please take one if you need one."

She noticed that the tampon machines were empty, so she left an entire box of tampons.

A user on Reddit posted a photo of this heroic effort. The mystery woman/hero left a whole box of tampons after she noticed the dispensers were empty, a problem pretty much all women are familiar with. Honestly, have any tampon machines been filled during this millennium? It's definitely a rare sight to see one that's actually stocked with menstrual products.

Per her note, the box of tampons cost her a whopping $15 dollars Canadian.

Like everything else in an an airport, tampons can cost almost twice what you would pay in a store. But if you need one, you really have no choice.

It may seem like a minor inconvenience, but the fact that women ever have to face this issue is kind of ridiculous.

The Tampon Fairy's note points out this is “really not acceptable." And it’s not! Most women carry a few tampons around in their purse in case of an emergency, but sometimes you forget to restock, and get caught by surprise. The vending machines are often empty, or if in some miracle they actually contain what you need, they usually only take specific change — change you don't have. Meanwhile, all the toilet paper you'll ever need is there, free for the taking.

Some people think that tampons and other sanitary products should be free in public restrooms.

In a 2016 Huffington Post article, Emily Peck wrote, “While no one thinks twice about the cost of stocking restrooms with toilet paper and soap and hand towels, feminine products are considered a luxury. We live in a BYOTampon world." Peck also conducted a Twitter poll asking her followers about the issue. While she admits it was wildly unscientific, the results are pretty clear.

It’s a common problem, but women, as usual, like to help each other out.

Reddit user RosieEmily wrote, “If even your lifetime mortal enemy gets her period unexpectedly and you have a spare, you damn well give her one. That’s the rule that will never ever be broken."

Some places do provide free tampons in their restrooms, and it’s always a delight to see.

User SauceTheCat on Reddit wrote about her decision to provide free tampons to women in her workplace: “Tampons aren't exactly a fun or pleasurable thing for us. They're an absolute necessity for about 40 years of our lives. We don't exactly enjoy using them. The only only thing they give us is the satisfaction of not bleeding all over ourselves for a few hours. And if I can help some random lady regain some of her dignity by allowing her a handful of cheap tampons for free, then honestly I feel better for it." In other words, she’s got their backs. Or uteruses, as the case may be.

This act of kindness underlines just how expensive having a period is.

According to the Huffington Post, menstrual products can cost a woman almost $2,000 dollars in her lifetime. Plus, in many states, feminine products such as pads and tampons are taxed. The mystery Tampon Fairy was in Canada, where, aside from empty tampon machines and high prices, they actually have it slightly better than the U.S.: feminine products are not taxed in Canada. In the U.S., almost every state taxes these products.

But some people are pushing back.

California assemblymember Cristina Garcia has been trying to get the California "tampon tax" removed. “This is not insignificant to women, especially poor women on a tight budget who struggle to pay for basic necessities like a box of tampons or pads every month for their adult life," Garcia said in a press release. “If we can’t make them free we should at least make them more affordable." Other representatives and citizens have been fighting similar battles in other states.

For now, this act of kindness reminds us that women support each other in this matter.

As Reddit user marmletea so eloquently put it, “You can hate the bitch and wish her dead, she may be your nemesis. When it's that time though, you wave a white flag, call a truce, and give bitch a tampon. It's a sisterhood thing. We've all been there."