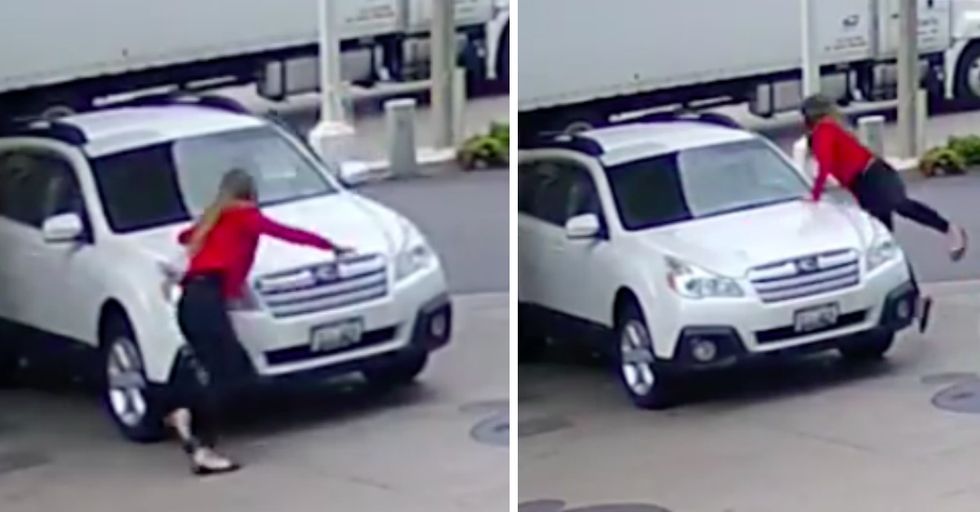 Many of us don't know what we would do when faced with a dangerous situation, hence the whole "fight or flight" reaction.

Take, for example, someone stealing your car, which was the situation facing Melissa Smith of Milwaukee, Wisconsin. According to WISN, Smith was pumping gas when a car pulled up on the other side of her vehicle. As you can see in the footage below, a man gets out of a Cadillac and climbs into the driver’s side of Smith’s car.

The thief started to drive off, and Smith dove into action — literally.

“I had the thought in my head. ‘Do I go after my purse or do I stop my car?’" she said. "And the price tag of my car flashed through my head." “I didn’t see him 'til I saw him get into my car," she added. "Someone was in my car. And I had my, ‘Oh, hell this isn’t happening to me today’ moment."

So what did she do? She jumped on the hood of the car, which only annoyed the thief more.

He slammed the brakes twice in an attempt to get her to fall off, and while she was sprawled on the hood, she made eye contact with him. “He looked at me, and he laughed at me, which really irritated me," she said. “He was laughing while I was on my car, and he was trying to throw me off, so zero remorse."

The dude eventually bailed and slid back into the black Cadillac, and Smith was somehow able to get into the driver's seat of her car and put it in park.

It wasn't the smartest idea, something Smith admits, but she said, “I went with my instinct. Yeah."

You can see the harrowing footage here:

As you can imagine, the Internet had some thoughts, and they were pretty divided:

At the end of the day, it's just a good thing that Smith is fine and that they have the whole thing on tape, meaning they should be able to prosecute the creep. But people — please — don't try this at home.