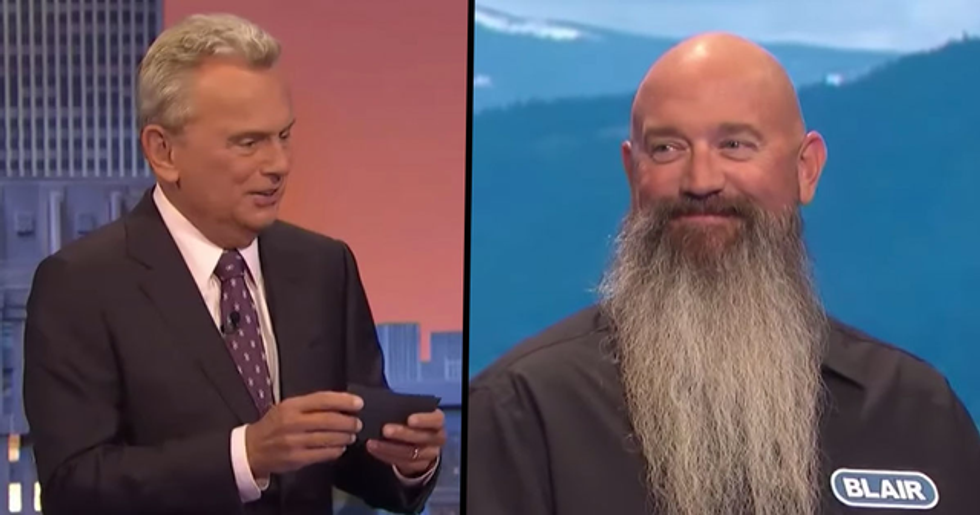 They say that honesty is the best policy... But, sometimes, it's best to just keep your mouth shut, especially when you're slandering your own wife.

Well, the latest Wheel of Fortune contestant clearly missed this memo, because he opened up spectacularly about his current living conditions to a rather startled Pat Sajak. When asked to introduce himself, the contestant, Blair Davis, suddenly confessed that he is "trapped in a loveless marriage".

Talk about breaking the ice...

Blair didn't stop there and went on to say some pretty questionable things about his stepkids too. This guy!

Our friend Blair here is perhaps the most honest contestant in Wheel of Fortune's history.

Each Wheel of Fortune episode is opened by the hosting duo, Pat Sajak and Vanna White...

And the pair usually waste no time in introducing the episode's latest contestants, before challenging them to spin the famous wheel and answer questions in the battle for the much-desired cash prize.

The vibe of the show is usually pretty jolly...

So Blair's shock introduction on Monday night caught the attention of many avid Wheel of Fortune fans.

Monday night's episode started like any other regular edition of Wheel of Fortune.

Sajak launched into his usual spiel of introducing each contestant. So far, so good, right?

Well, it was all good until Blair came along...

Because this contestant spectacularly threw a spanner in the works and ultimately turned the vibe of the show completely upside down.

Blair was shockingly honest in his introduction...

The Californian trucker opened up in a way no one quite expected him to.

He didn't hold back in letting the audience into his life.

When asked to tell a little bit about himself, the (quite legendary) trucker replied, “I’ve been trapped in a loveless marriage for the last twelve years to an old battle-ax named Kim."

None of us were expecting that.

Nope. Good old Blair still had some ammunition left, and he launched straight into a savage attack against his step-kids.

It turns out that Blair is one savage stepdad.

He continued, "She cursed my life with 3 stepchildren, named Star, RJ, and Ryan, and I have one rotten grandson."

Throughout his introduction, Sajak seemed, quite understandably, taken back by it all.

“No wonder you came here, you just wanted to get away from everybody!" the seventy-two-year-old quipped, while the audience laughed in the background.

Surely, this man wouldn't slander his own family on national television like this?

Of course he wouldn't!

He went on to discuss his rather impressive beard.

And said he keeps the beard, which reaches his torso, as a request from his “rotten" grandson. “Every time I threaten to shave it off he gives me a really hard time," Davis said. “He’s grown used to it."

You can watch his full introduction here...

Which may be the best Wheel of Fortune opening ever.

And we love him too!

However, he didn't make it to the bonus round...

Though he did get to take $6,000 home to his battle-ax wife and rotten stepchildren. Every silver lining, right?

But people were still outraged at Blair's loss.

And some people think Blair was cheated...

Scandal in the Wheel of Fortune community...

And his introduction alone should have granted him the winning prize.

Super bummed Blair didn’t win #WheelOfFortune tonight, because he had the best intro of all time https://t.co/pvvdDnllMB
— Bex (@Bex)1571099466.0

Luckily, he had the full of Twitter backing him. You're a winner in our eyes, Blair!