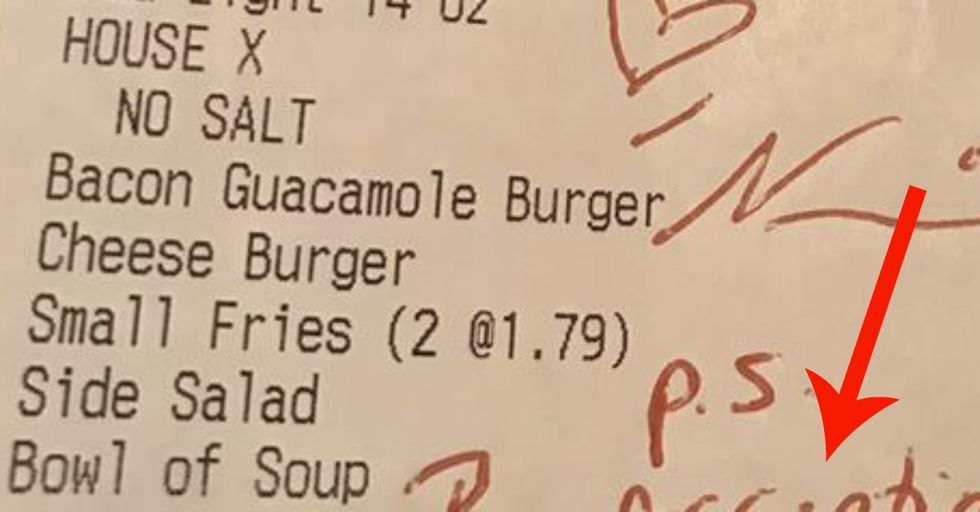 When a Homophobic Family Berated Their Gay Nephew In a Restaurant, They Got THIS Note On Their Receipt

Natalie Woods, an openly gay woman, was dining at Snuffer’s Restaurant and Bar in Texas when she overheard a family near her table talking about their "awful" gay nephew.

She detailed the encounter to The Huffington Post, describing how one of the three members of the party said he was "disgusted" after their "liberal" nephew came out as gay, while his fellow diner said they would "pray for Jesus to cure" their nephew. But Natalie told the website that she decided to take the high road and "actually act like the Jesus I grew up learning about."

Natalie took to Facebook and posted a photo of their receipt, on which she wrote a kind note of acceptance.

"Happy holidays from the very gay, very liberal table sitting next to you," she wrote. "Jesus made me this way. P.S. Be accepting of your family." Natalie, who previously worked for the Human Rights Campaign, added in the photo caption, "Bought dinner for the strangers behind me talking about their 'awful, gay, nephew, that they need to pray for.'"

She left before she could see their reaction, but when she shared the post on Facebook — hoping to spread a message of acceptance — the reaction was overwhelmingly positive, with more than 3,000 likes and comments.

After reading the comments, Natalie encouraged others to pay it forward, too.

To quote Michelle Obama, whose words inspired Natalie in the first place: "When they go low, we go high."