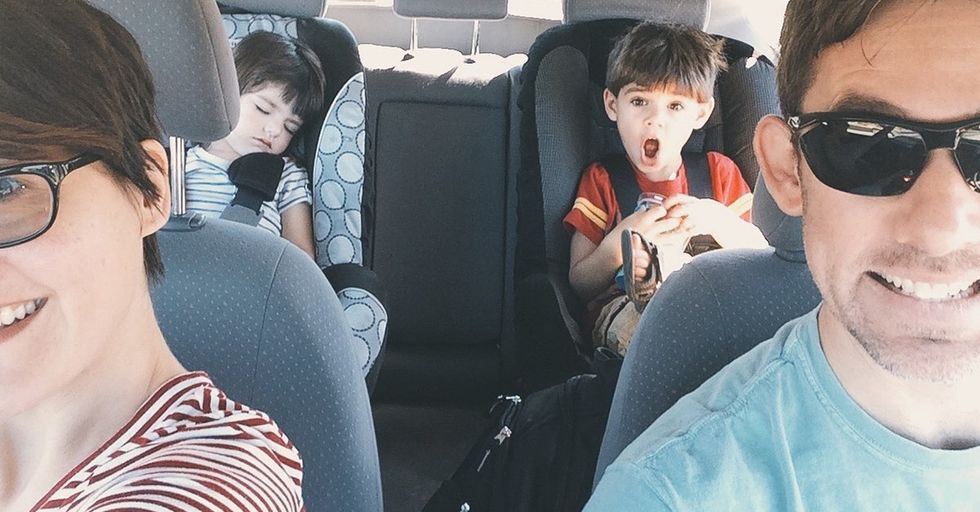 When my youngest brother was about 3 years old, my mom told him it was time to take a nap. He asked why (as 3-year-olds often do), and she told him it was so he could "get some shut-eye." From then on, my brother would talk at length about the importance of getting some shut-eye. Only he wouldn't say "shut." No, he called it sh*t-eye.

"I'm gonna get some sh*t-eye!" he'd proudly announce to anyone who happened to be within earshot around naptime. As you can imagine, this led to more than a few awkward situations and explanations.

My son pronounces “dump truck” as “dumb fuck,” which is amazing in a crowd of strangers when he’s pointing and yelling it over and over and…
— Dan Manchester (@Dan Manchester)1496242940.0

It wouldn't be so bad if he had trouble with either "dump" or "truck, but the fact that he struggles with both makes this especially entertaining.

My friend's toddler daughter pronounces b as d. Recently, she said 'die, die!' to an old man they met in a church as they were leaving.
— THE WICKER MANNION (@THE WICKER MANNION)1506779831.0

There's nothing quite as unsettling as a young girl telling an old man to die as she waves happily to him.

This one is just cute:

Although, I assume it probably leads to a bit of disappointment whenever he asks for the candy and ends up with an actual pickle.

Here's another cute one:

Fumper! If that's not the cutest thing ever, I don't know what to tell you.

That's not her name.

@OhThatMomGlow I love all of them, but I think my favorite right now is that 4 calls the lunch lady at their school… https://t.co/3HgBx3bXwN
— Momsense Ensues (@Momsense Ensues)1549511151.0

Poor Ms. Peggy probably thought she'd escaped that nickname when she grew up. Not so fast!

I have to assume this little girl is a Midwesterner at heart. We love our way-unch dressing.

Or maybe she doesn't mean "witch." I don't know anything about that witch. She might be downright unpleasant!

I can clearly imagine her asking to "ride the hearse." That's gotta get some quizzical looks...

I had to think about this one for a second:

This year's 4th of July festivities just got much more awkward.

The name Harper is becoming more and more popular. Maybe your daughter is just trying to give her a unique nickname!

Get ready for a call from his teachers.

I'm sure once you explain everything, they'll totally understand. Up until that point, though...

@hankgreen My daughter calls the iPad she’s allowed to watch on planes and long car rides her “patio” and I will never ever correct her.
— Arnie Niekamp (@Arnie Niekamp)1549349153.0

If I ever have kids, I think I'll just teach them that iPads are called patios. That way, I can enjoy the cuteness forever.

A Band-Aid sandwich does sound pretty unpleasant. Then again, so does a sandwich that just has mayonnaise on it.

Star Horse is absolutely a movie I would watch. No question about it. It could be so much worse!

On the other hand, this is probably a bit of a self-confidence boost, right?

The "n" is actually pretty important.

Imagine all the times these parents had to orchestrate a quick exit whenever "Uptown Funk" started playing at the grocery store.

This could go very, very wrong.

The words do sound quite similar. But the meanings couldn't be more different.

Please sign my petition to have all Fuddruckers restaurants change their name to "ButtCrackers." Come on. It's way better.

Personally, I consider it a grave oversight that George Lucas didn't name him Chewpoppa when it is so clearly a much better name.

This is what I'm going to call armpits now. I can't wait to work this term in with my everyday conversation. (What? You don't talk about armpits every day?)

Hey, I get it. Minigolf brings out the meany in all of us.

Where are these kids who put the word "cracker" into everything? More importantly, how can I be best friends with them?

Just wait until this kid has their first Choco Taco. They're going to be thrilled.

We can all agree on this, right? I guess it's time to rename the saxophone as well.

I can't tell if that makes everything better or worse... Probably worse, though.

This is too sad:

Let's bring bubulyoo! #BubulyooForever. Share this with someone who has adorably hilarious kids!