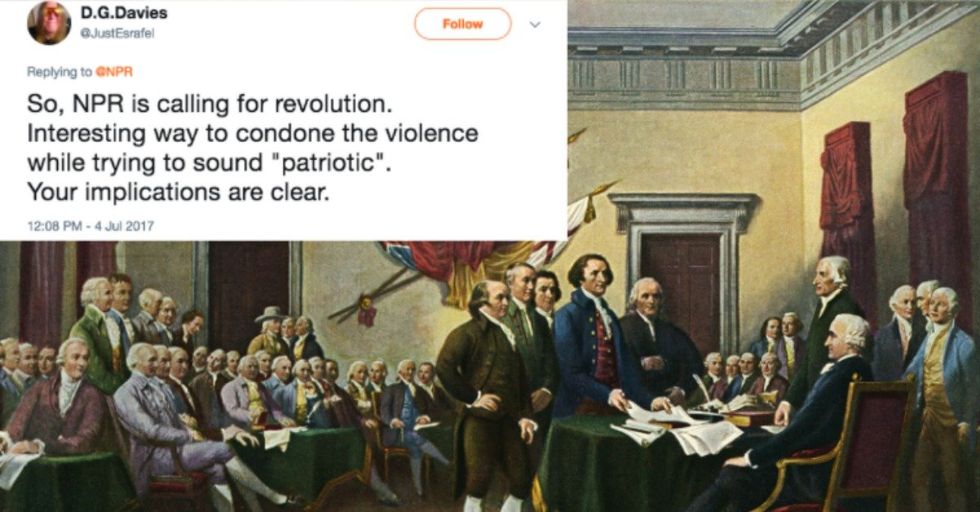 When NPR Tweeted the Declaration of Independence, Trump Supporters Lost Their Minds

For 29 years, NPR's Morning Edition has upheld a patriotic July 4 tradition. Every Independence Day, its radio personalities and reporters read the Declaration of Independence aloud. This year, they also posted the text of the document in a series of tweets, much to the chagrin of insane conservatives on Twitter.

Some people on that glorious website didn't realize that National Public Radio was honoring our nation's great history and instead believed the organization was spreading biased liberal nonsense.

It's unclear whether NPR knew exactly what it was doing or whether the ire it sparked in some Trump supporters was entirely unintentional, but either way, these tweets are beyond bonkers.

But believe it or not, there's a happy ending to this story. I know! But it's true.

At noon on July 4, NPR gave us this gift.

The organization began its thread with this link to an article explaining the tradition of reading the Declaration of Independence out loud every July 4 holiday.

NPR proceeded to post the entire text of the Declaration in a thread of tweets, exactly the way John Hancock and the other signers intended for it to be read.

If Twitter was around when the Declaration of Independence was being written, it would be much more succinct. #AllMenAreCreatedEqual #UnalienableRights #LifeLibertyPursuitOfHappiness

The organization dutifully sent over 100 tweets in order to post the whole Declaration.

Some of the choices in line breaks could lead one to believe that NPR was indeed aware of its ability to rile some people up with the very words on which our nation was founded. The most retweeted post of the series is, "A Prince whose character is thus marked by every act which may define a Tyrant, is unfit to be the ruler of a free people." Hmm. I wonder which current leader of the United States this sentence could potentially refer to?

There is actually a lot in the document that could be construed as critical of our current government.

While the Declaration of Independence does seem stark in its relevance, it is by no means "biased propaganda."

Diesel's use of emojis leads me to believe he has positive feelings toward the United States of America, and yet, he didn't recognize the most American text of all. What do I have to say about that? ? ?

Darren Mills let us know exactly what he thought about NPR's move.

The correlation between those ignorant of American history and those with American flag emojis in their Twitter handles is truly disturbing.

Many detractors were preoccupied with the idea that NPR receives public funding while espousing a seemingly liberal agenda.

But I have to say, these "defund NPR" tweets prove why education and the arts need funding more than ever.

At least these Trump supporters are eloquent.

If this is how they feel about the Declaration of Independence, I would hate to learn what they think about the Constitution.

Many of the insane response tweets have been deleted. But lucky for us, Upworthy writer Parker Molloy was present in real time with her screenshot fingers at the ready.

Many chided NPR for their supposed slanted tone.

I think "Please be chill" is my favorite response. C'mon, NPR. Stop educating people by spreading knowledge of our country's history. Be chill.

It was only a matter of time until someone cried, "fake news." We can't say we're surprised. We can say we're disappointed.

Perhaps the most retweeted disparagement of NPR came from D.G. Davies, who claimed that NPR was "calling for revolution" by quoting the Declaration of Independence.

The guy was mad, but he was also wrong. What happens when this was pointed out to him might actually shock you.

No really. Read his tweets again. D.G. Davies didn't delete his mistake and run into hiding. He admitted that he "took NPR out of context and had a stupid moment" and actually learned his lesson.

Others were quick to recognize the cojones it took for Davies to own up to his error.

Not going to lie, these tweets brought a little tear to my eye. This — this spirit of listening to each other, understanding each other, forgiving each other — is what we should be noting and celebrating.

The capacity for learning and changing and growing that Davies displayed is what will make this country great.

Maybe there is hope for the U.S. after all. Let's all make a promise to listen to someone today. It will do everyone a bit of good.