When You See What This Seattle Dad and 'Harry Potter' Superfan Built, You’ll Believe in Magic | 22 Words 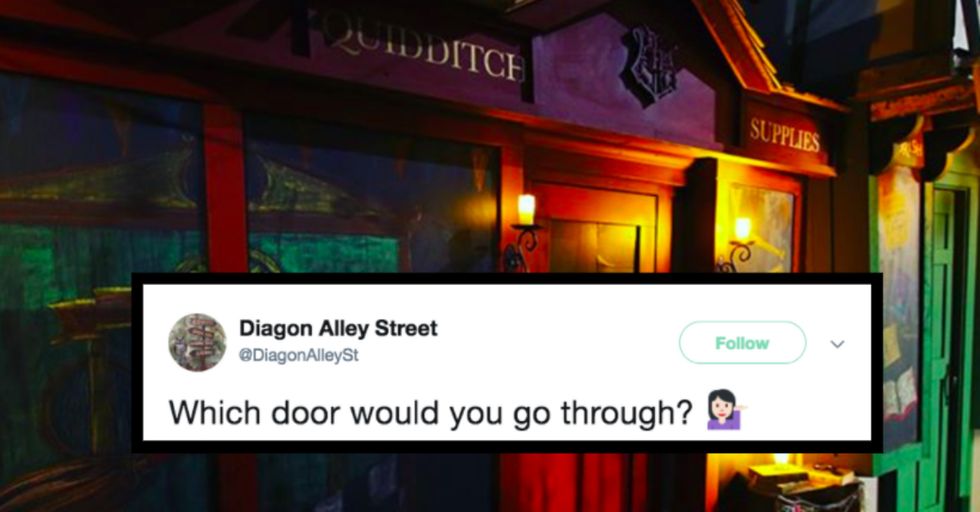 When You See What This Seattle Dad and 'Harry Potter' Superfan Built, You’ll Believe in Magic

It's truly amazing to observe superfans. It only takes a quick spin through a local ComiCon-type convention (or the internet) to realize that people who are die-hard devoted to the books and movies they love go above and beyond to show that dedication. Star Trek fans, Star Wars diehards, and Tolkien devotees can be serious as a heart attack when it comes to the thing they love.

And then there are those who eat, sleep, and breathe Harry Potter.

At this point, it would take living under a rock to not be aware of the boy wizard and his magical world of Hogwarts. Millions of people worldwide have proven their devotion to J.K. Rowling's fantastical tales by buying the books and wearing the merchandise, but now there's a new Potter superfan on the scene. And what he's building is as close to magic as it gets.

We all have that thing we love.

Whether it's reality TV, gaming, or comic books, everyone has something they're passionate about. Most of us keep it casual and enjoy various interests in whatever spare time we can find. Star Trek movie marathons are a great way to pass the time. Collecting Star Wars figurines is fun. And while we may turn a little red when people notice, we're secretly proud of that hardback boxed set of sparkly vampires displayed in the middle of the living room bookshelf.

"Liking" something doesn't begin to describe the superfan.

Superfans are in another category entirely. If you happen to be one, chances are you don't simply like something. You're pretty much obsessed with it in a (hopefully) healthy way. Superfans aren't simply up-to-date about their passion of choice, they know it backwards and forwards. There's no trivia too small or obsolete that it gets left out of the mind catalogue of this type of dedicated fan.

Looking the part is a logical step in fan devotion.

The superfan has absolutely no problem heading to ComiCon or waiting in line for hours to see the next movie in a series. In fact, superfans have been known to dress up as their favorite characters for these events and screenings. The closer they can get to an authentic experience of that world, the better. If that means putting in serious hours to recreate the costume of a beloved character, then so be it.

Not exempt from this phenomena, Harry Potter has a way of bringing out mega-enthusiasts.

It could be that J.K Rowling's fantastic imagination wove an incredible world to get lost in. Or it could be that the main character resonates with people of all ages and backgrounds. But no matter the reason, to date, the Harry Potter series has sold somewhere around 400 million copies. Fan fiction, merchandise, and everything in between have spawned from the gigantic success, and the people who love the wizarding world show no signs of tamping down their enthusiasm. If you happen to say something like, "I don't know what Hogwarts is," to a Harry Potter fan, there's a good chance they'll simply stare at you in disbelief.

The ante was upped when Hogwarts hopefuls had an actual place to go.

Potter devotees were taken to the next level of fandom when the Wizarding World of Harry Potter opened at Universal Studios in April of 2016. Besides being gorgeous and extremely true to the Potter movie sets, it was the first time that superfans who loved the books could walk through and touch something they'd only imagined. With staff on site to fill the roles of wizards and shopkeepers, fans were blown away by the fantastical experience.

But for one fan, even a theme park wasn't enough.

Jonathan Chambers is a quintessential Harry Potter superfan. Coincidentally, he's also amazingly talented in the area of art and design. Both of these skills kicked into high gear recently, when he put out a call to his local artistic community to help him with a little project. Well, not "little" exactly. "Ridiculously huge undertaking" would probably be a lot more accurate. In fact, when Chambers posted on social media, "epic" was how he described his plan.

As it turns out, "epic" didn't begin to describe the breathtaking project.

Chambers, a Seattle resident who'd recently become unemployed, says he'd had a resurgence of interest in Harry Potter and felt the need to put his creative side to work. He kicked off the ambitious project by sketching out "Diagon Alley," the wizarding marketplace featured in the beloved books. It's here that the book's characters could buy wands, supplies, and anything they needed before heading to Hogwarts. Chambers wanted the same thing in his own driveway.

Luckily, the community turned out in spades to support the Potter project.

Chambers put out the call for help and crossed his fingers that like-minded people would pitch in. He posted, "That sounds great Chambers, how can I help you ask? Well, I need your help painting, procuring items to dress up the shops, as well as your artistic abilities to add as much detail to the alley before Halloween. If you are interested message me!" His goal was to have everything up and running by Halloween, and to make sure it was open for Christmas as well. As luck would have it, tons of Potter enthusiasts were more than willing to contribute.

As Halloween neared, it was clear the project was coming together.

Chambers and his creative team went into overdrive, trying to finish every detail before the grand debut on Halloween. And while copious hours went into building, painting, and refining each aspect, some of the truly impressive features — like these scissors for Madam Malkin's robe shop — were 3D-printed. That level of technology doesn't always pop up in garden variety backyard projects, so to see its practical application in this particular labor of love is both impressive and fascinating.

Everything came together, and the results were out of this world.

Chambers was able to meet his deadline, and his "Diagon Alley" opened to the public on Halloween. With the help of his wife, two adorable daughters, and various members of the community, the artist generously managed to give kids and adults alike something truly magical on October 31. It definitely surpassed the regular old trick-or-treating routine, and the crowd made memories they could take with them for a lifetime.

It's not too late to get in on the Potter action.

Not just a creative, resourceful superfan, Chambers is also extremely generous with his time and willingness to share his gift with the public. He says that his Diagon Alley will be open for the rest of the year, especially for the Christmas season. That means you too have the chance to pop by the Seattle creation and take a few pics. Now that is magical.