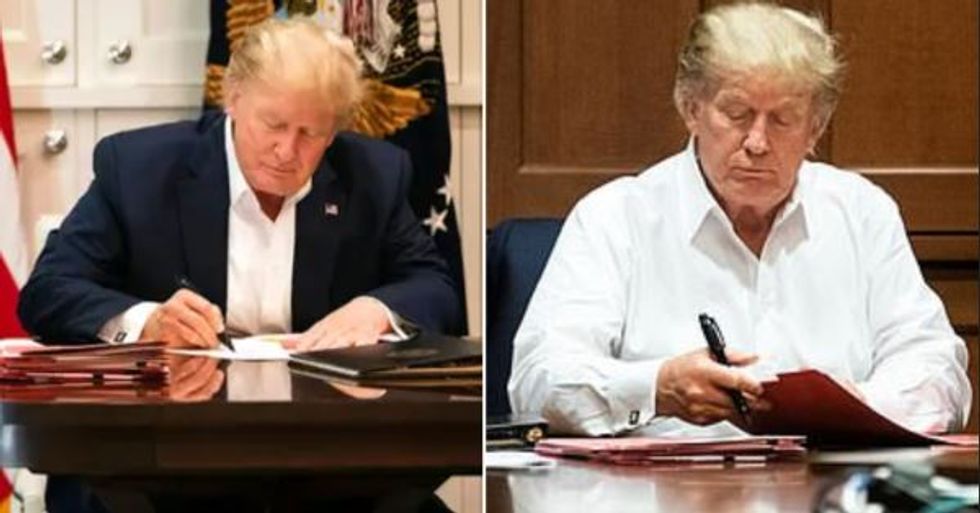 As I'm sure you are all well aware by now, the President of the United States has been diagnosed with coronavirus.

While his doctor has claimed that the president is doing 'very well', speculation about his continues to circulate.

Now, the White House have released photos which purport to show Trump working into the night in hospital.

Keep scrolling to check the photos out.

On Friday, Donald Trump was taken to hospital.

According to The Washington Post, "Trump was struggling with a low-grade fever, a cough, and nasal congestion, among other symptoms." His doctor later spoke out giving an update on his condition.

Since the news broke that Donald and Melania Trump have tested positive for coronavirus...

People have had a lot to say. Of course, some have been digging up the past, while others have been sending him well wishes. But now SNL have mocked Trump harder than anyone else.

Because according to experts, while he is doing well, his risk of death remains high.

And, earlier in the week, it seemed that their mutual feelings of resentment finally reached a boiling point.

After it was confirmed that the President and his First Lady had been infected with the virus.

Trump tweeted this on Friday...

His doctor also spoke out claiming that the president was doing well.

Trump's physician gave an update on his condition yesterday morning.

Trump's physician gave the update on Trump's state during a press conference outside the hospital in Maryland.

Speculation continues to stir about the president's genuine condition.

And, presumably to prove that the president is doing as well as they say, the White House have released photos showing him working in the hospital.

President Trump is still working in his Walter Reed hospital conference room even while he fights coronavirus. You… https://t.co/R48xB4NP08
— Robby Starbuck (@Robby Starbuck)1601786606.0

But many people pointed something out.

I don’t care if this is a photo op, this pic of Trump working from the hospital is prettyyyyyy cool https://t.co/dqQFDlNIpT
— Cabot Phillips (@Cabot Phillips)1601781366.0

Trump wasn't wearing his tie, which he is normally always wearing, and many people pointed this out saying it's highly unusual for the president.

According to all updates from his physician and doctors working with Trump, he is making a lot of progress - and Trump claims that the experimental drug he is being treated with is the work of God.