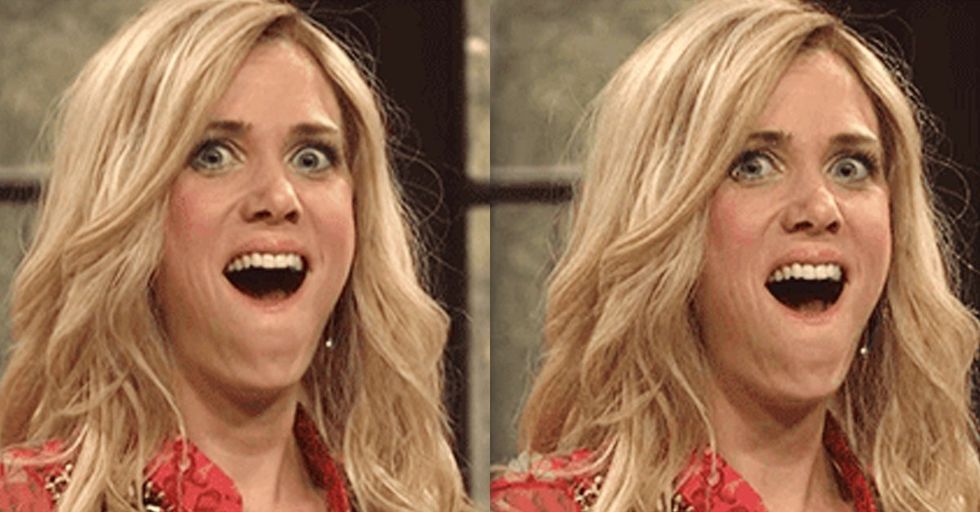 Twitter's latest meme trend is as accurate as it is funny. Loads of Twitter-users answered the question: what do white people love to say? The amount of '-isms' collected is crazy, and each person's answer is sure to make you laugh. From old jokes to catchphrases and offhanded remarks, our list covers a little bit of everything.

If you can think of a popular saying or two yourself, read on to see if the Internet agrees! You might even say a few of these things without realizing it! So check out this list of things that white people are definitely guilty of saying.

Some jokes must be repeated.

Get all the free stuff.

On the subject of living dangerously:

What’s life without some risk?

Such a lack of trust…

How do you make plans?

Is this code for "let’s not and say we did?"

Exercise to the fullest.

How else do you get cardio?

When Doritos pack a punch:

Sometimes the snack packs too much of a punch.

White people love saying “what’s the damage” and then chuckling when they have to pay for something.
— Franky Spanky (@Franky Spanky)1536848466.0

Hmm, depends on the damage done.

At least the statement is truthful!

Gotta get every single crumb!

Hey, it was bad, not inedible!

How to greet your friends:

white people love to have parties and always let everyone know their best friend arrived by saying “ohhhh look at what the cat dragged in!”
— chris melberger (@chris melberger)1537467597.0

How about some self-made sound effects?

But you’re not knocking, you’re talking…

Sometimes even walking is too much.

Sounds unsanitary, but sure!

This phrase should have been left in the ‘90s.

Sure, let me just grab my drum set!

White people never do anything interesting.

See, it's funny because it was actually not that long ago.

This is someone else's fault.

"The random act of shuffling was done by someone so incompetent they have indeed given me cards I would not prefer!"

Are you going to fly away? Is that the plan here?

And he shall appear.

White people love to say “speaking of the devil” when someone comes over that THEY invited
— HellCat (@HellCat)1583281155.0

This might happen because the only thing white people do at parties is talk about who's coming, so the odds are good they literally were talking about someone as they come in.

I just check my phone these days.

The correct response to this is: "Hahaha but shut up and tell me the damn time already."

Talk about a hike.

Of course, many white people will say this and then continue talking to you for another four to five hours. They... don't have a lot going on.

I would also like to know what the word "oop" means.

Sometimes, white people feel the urge to say something if no one else is saying anything.

Would you rather we all talk with our mouths full? That's about the most disgusting thing I ever heard, Frank.

"Hahaha but seriously don't I love my dog."

This is not a good problem-solving strategy.

Someday a wizard is going to start making things grow legs and walk away and it is going to shatter white people's very concept of reality.

Board games are fun with white people. They rhyme things for no real reason!

"Better them than me!"

White people love to say “well at least they’ll get the ticket” while speeding on the freeway and someone passes them
— caroFINE (@caroFINE)1583815609.0

Another option? Simply don't comment on it at all.

"Hope that's my package. I been expecting it for weeks!"

And they're always shuffling and pulling up at their pants when they're doing it.

Next time, try an actual form of measurement.

I can't count the number of times I've hopped once, skipped once, and jumped once, only to find myself not at my destination.

This is very mean, white people.

White people love looking at baby pictures of you and saying “aww what happened”
— dannyteran (@dannyteran)1583810887.0

Some people are just cuter as babies! Don't make them feel bad about it!

See, white people aren't great at communicating, so this is their way of saying, "I wish you had been on time and it is disappointing to me and feels disrespectful. I hope this behavior can be remedied in the future."

"Who left this coffee table here?"

This is often proceeded by a "Yee-owch!" and maybe even a bit of sharp exhaling disguised as laughing.

They're very excited about their new Applebook.

It's not like I was wondering what it was doing.

This is usually said, loudly, when a white person is going to the bathroom in the middle of a movie.

Always looking for a silver lining.

How do you know what we need? Are you a plant?

Again, I think this speaks to the white person's need to say something, even when nothing needs to be said. "Oh, a bit of silence? Time for a movie quote!"

Maybe they did! Did you ever think of that?

And think about how it's affecting that poor fast food employee! That must've been very difficult!

You know what I meant.

It's not funny to take my common turn-of-phrase literally, white people. Get some new material.

"We'll send this one to grandma."

There is nothing more important to a white person than the appearance of love. Love itself? That's a big-time whatever.

There are no guards at the store.

You're not wrong. They do let literally anyone in there.

Must. Not. Show. Emotion.

And then when they're in the midst of crying, they say, "oh, I'm just being silly."

Why do they all say this?!

This one blows my mind! It's such a weird specific! Also, why have we all been around a white person with a blue tongue enough times to know that this is a thing?!

A popular alternative to "you’re welcome."

White people love saying “That’s why they pay me the big bucks” whenever someone thanks them for helping
— Hunter (@Hunter)1536795596.0

Is it really, though?

If this ain’t the truth…

White people love saying “You paying for mine too?” When they see anyone they know at a restaurant.
— Ross Johnson (@Ross Johnson)1536850994.0

Pay for your own dinner!

A popular term to convey emphasis:

It is said, literally, all of the time.

You have to issue a warning before the dancing starts:

Get ready for some sick moves!

Do you believe in magic?

Too little, too late.

Thanks for the warning!

Learning languages can be fun:

If you’ve ever taken more than a couple of minutes on your shoes (or jacket), you’ve probably heard that!

How to tell when food is good:

That’s one way to interpret silence!

We all say this at least once a year.

When rain starts to fall:

The firsthand evidence can’t be denied! Share this story with your friends to see if they share anything in common with it!