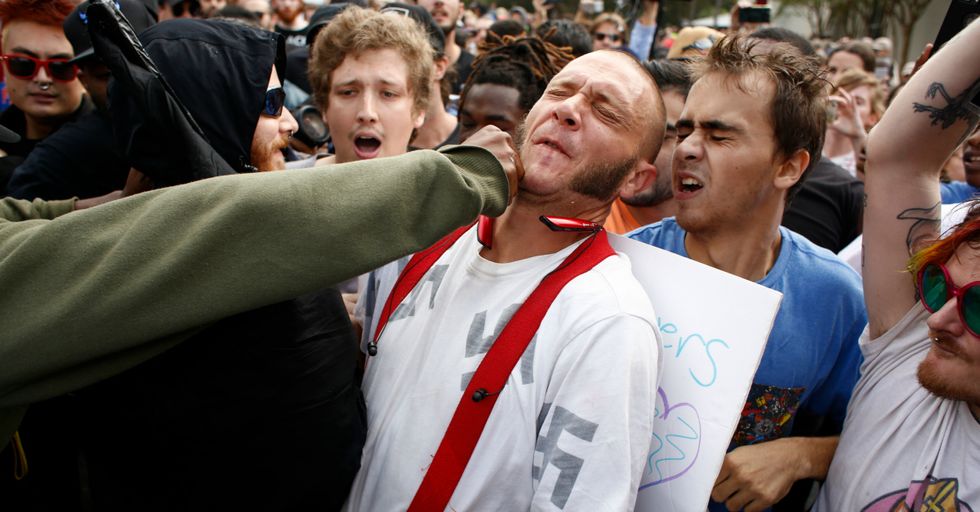 White Supremacist Richard Spencer Tried to Have a Nazi Rally, but It Didn't Quite Go According to Plan

White supremacist leader and neo-Nazi Richard Spencer planned to speak at the University of Florida in Gainesville on Thursday, October 19. According to CNN, it was Spencer's "first planned speech on a college campus" since the rally in Charlottesville, Virginia in August, which turned violent and deadly. Needless to say, it was a fraught situation. Presumably, Spencer thought he'd be ushered into the auditorium, spew his hate, and be applauded for his backward views. But the students and citizens of Gainesville, Florida had other ideas.

Richard Spencer's little visit to Gainesville actually prompted the Governor of Florida to declare a state of emergency.

"We live in a country where everyone has the right to voice their opinion, however, we have zero tolerance for violence and public safety is always our number one priority, Gov. Rick Scott said in a statement. "This executive order is an additional step to ensure that the University of Florida and the entire community is prepared so everyone can stay safe." Doesn't it stand to reason that if your very presence incites violent rage in people, you should probably reevaluate the beliefs you're touting?

Ahead of Spencer's speech, hundreds of protestors gathered to let the guy know that Nazis were not welcome at the University of Florida.

The police presence was intense, as were the protests. People chanted, "We don't want your Nazi hate" and "Nazi scum off our streets." A Nazi got punched.

Even when Spencer took the stage, he was met with ire. Warning: Foul (and awesome) language in the video below.

Many who were in the crowd at the Phillips Center were actually protestors as well. Guess there aren't as many Nazis in Gainesville, Florida as Richard Spencer had hoped. It may have also helped that local brewery, Alligator Brewing, offered free beer to anyone who brought them tickets to Spencer's speech...so they could throw them in the trash, ensuring empty seats.

Spencer really couldn't get a word in edgewise thanks to vocal anti-Nazis. (Here at 22 Words, we call them 'normal people.')

These normal people started chanting "It's your fault!" when Spencer mentioned Heather Heyer, the protestor killed by white supremacists in Charlottesville. All in all, it was not a great turnout for Nazi Richard Spencer's Nazi speech.

Luckily, there was no rioting or out-of-control violence but peaceful protests that let Spencer know he and his hate were not welcome.

Spencer told the shouting crowd, "I'm not going home. I will stand here all day if I have to." But protestors like Gabriela Pineros were also going to stand their ground, for acceptance and love and a rejection of Richard Spencer's insidious brand of hate.