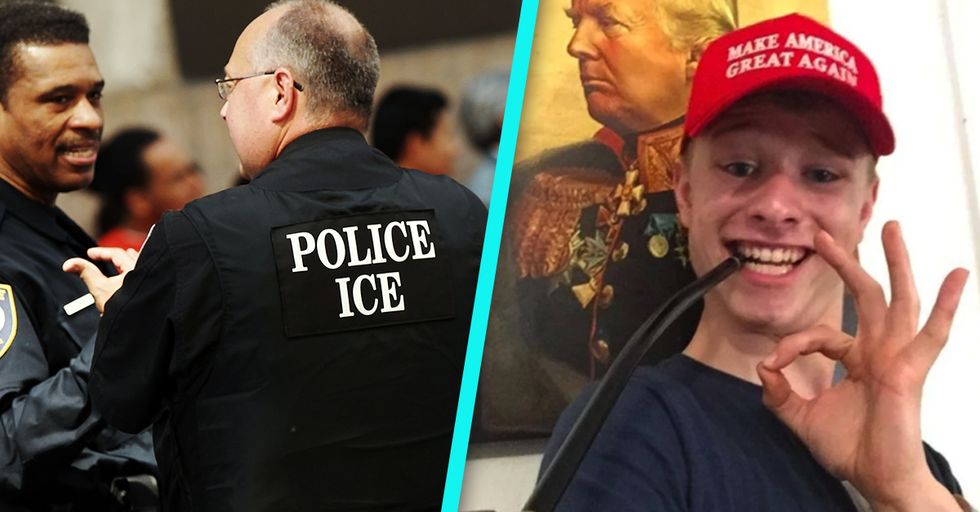 Here's the thing about white supremacists: They are bad. Really very very terrible.

But here's the other thing about white supremacists: When they get their comeuppance, when they are punished, when they face actual consequences for their actions, it is so so sweet. Like the sweetest nectar of the sweetest peach in all the land.

I'd like to tell you a little story about a super racist teenager. It's this one:

Yeah, that's right. The kid in the Confederate flag hat spouting nonsense about the war on Christmas. He is the subject of our story.

Just for more context, this is another message from him:

These horrendous screenshots were dutifully collected by babe.net when this racist, white supremacist teenager entered the public consciousness. He may have deleted his Reddit account, but screenshots are forever, baby.

You see, this kid, who is in high school, bragged on Reddit (before deleting his account) about reporting an undocumented classmate to ICE (Immigration and Customs Enforcement). Here's his post:

That's him, wearing a MAGA hat and posing in front of a portrait of Donald Trump. He's got a pipe in his mouth and he's flashing what has become a symbol of White Power. Oh, he's also wearing a t-shirt with an anthropomorphic hamburger on it. That's not offensive; it's just dumb.
In the post, he explained, "The person I reported hasn't even been here long enough to speak more than basic essential English. They're no DACA baby like everyone seems to be assuming for some reason. Also, don't worry about their family. They're illegal too."

But White Supremacist Teenager — as I have dubbed him — made one fatal mistake.

When you're a flaming turd of a human being and you decide to broadcast that fact online, you should make sure your hate accounts aren't traceable back to your real name. This kid did not do that. Once his awful photo went viral, the Internet immediately went to work...

And they found him very easily.

His name is Cory Carnley. He's from Gainesville, Florida. And he's a white supremacist.

It turns out that Carnley spent quite a lot of time on Reddit making terrible, racist comments. It seems he had a penchant for throwing around the n-word, complained about people being "Jews," and threatened to rape someone.

A classmate of Carnley's at Gainesville High School told babe.net that he was known around school for being racist and making comments like this. "He loves his MAGA hat but we're not allowed to wear hats at school," she said.

Good thing Carnley's vitriol went viral because his school got wind of his behavior and immediately kicked him out of school.

Justice is sweet, isn't it? David Shelnutt, the principal at Gainesville High School, told babe.net, "I could not disagree more with the ideas in these posts. They certainly do not represent our school's culture. GHS is a wonderfully diverse school where students come together and do amazing things. One student does not speak for 1,800 classmates. While this is an extremely unfortunate situation, I hope it will also serve as a learning opportunity for our students."

More succinctly, he offered, "The student who made the postings is no longer attending GHS."

Au revoir, Cory Carnley. While expelling him from high school seems antithetical considering he is clearly in dire need of an education, racists and white supremacists need to have their privilege stripped away and need to be punished for their hateful actions. Bravo to the school principal for having principles.