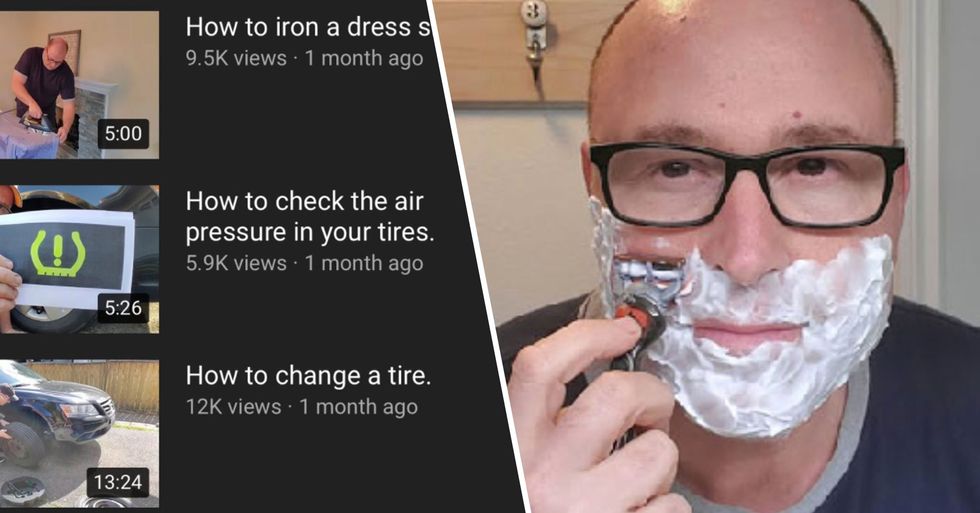 Parenting is one of life's most difficult tasks. I mean, I'm sure it's a very rewarding experience, but it seems like a lot of responsibility from the get-go.

But what about those people that don't actually have a father figure around? Well, one dad took it upon himself to create a YouTube channel dedicated to those people and it's the purest thing ever.

Keep scrolling to see his most recent, emotional "thank you" video.

I'm going to start off by stating the obvious.

Being a good parent is a tough job.

From teaching your child right and wrong to putting food on the table...

It can easily become too much for any couple to handle.

But while some people have that luxury of splitting up the job...

Other single parents have to take all the responsibility on their shoulders.

But what truly makes a "good parent?"

Well, a recent study conducted by the University of Delaware Professor of Human Development and Family Sciences, Rob Palkovitz, focussed on the importance of fathers in children's lives.

And the results revealed some important findings...

Aside from the particular qualities we know about, the study also exposed that active fatherhood is beneficial for the dad too.

It talks about how our visions of father-child relationships have gotten more "complicated."

It may be easy to think that a father figure is significant to a child's growth when they are young, but research has found that the process of establishing a healthy relationship with your child actually spans across a lifetime.

But what about those people that don't have a dad around to help them through the tough times?

In America, 1 in 4 children grow up without a father in their household.

So who are children, especially sons, supposed to turn to?

Well, one dad has taken it upon himself to dedicate an entire YouTube channel to those people who need some fatherly advice.

And it's the purest thing ever.

Run by Rob Kenney, this channel has become a guide for anyone that needs it.

His videos range from step-by-steps on how to complete everyday household tasks, to more personal matters.

And the most heartbreaking thing is that channel was born because of personal experience...

After his own dad left him as a child, "fracturing" his home life, he wanted to provide other people in the same situation with some comfort.

And that's why he's decided to post videos of simple tasks people usually do with their dads.

Kenny told WCIU news station this: "It's definitely resonating. I'm getting such amazing comments from people. This has gone way beyond what I thought - I thought it would have 20 or 30 subscribers."

"Some of the emotional responses I've gotten from people who don't have fathers or don't have a relationship with their father or have lost their father, have said they've watched my videos in tears."

"Every day I wake up and I go, 'I can't believe what this has become."

He's even started up his own Instagram account so he can reach more people and it has already gotten over 15,000 followers.

He received a lot of support from his family...

"The whole quarantine thing has been rough on all of us across the globe so I finally had some time to do it. I suggested it probably two years ago to my daughter and she said, 'you need to do that'."

But the comments from random strangers have been the most overwhelming.

One user wrote this: "I lost my dad two years ago today and just seeing how sweet he is, just reminds me of my dad a lot." It seems as if Kenny's touching a lot of people's hearts.

And we wish him nothing but more success as he continues to put a smile on people's faces.

There were thousands of more comments under all of his social media posts.

There's nothing more important than succeeding as a parent.

It may be a tough job, but the rewards are overwhelming. Fatherhood, and motherhood for that fact, play a crucial role in a child's and adult's development and something as important as Kenny's videos can help with that.

Check out his emotional "thank you" video here:

If you're looking for more parenting news, then keep scrolling to see how one mother decided to teach a valuable life lesson to her daughter...