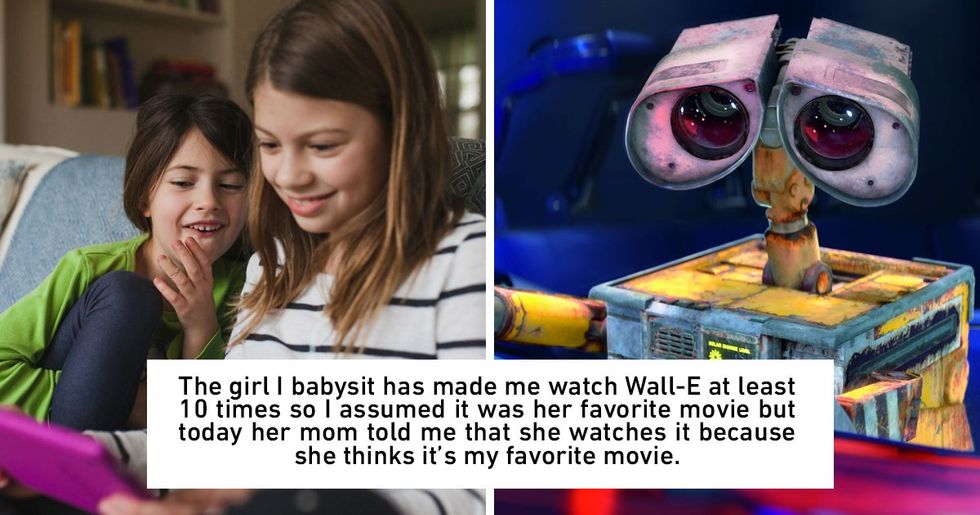 The Most Wholesome Moments the Internet Has Ever Given Us

Okay, we're not gonna sugar-coat this: the internet can be a rotten place sometimes. Any time you're interacting with another person through a computer and/or phone screen, the anonymity provided by the internet makes it easier for people to get angry, get troll-y, or worst of all, get random.

But it's not all bad! There are small pockets of the internet that are sweet and lovely. That's right, some of the people on the internet are incredibly wholesome — just a bunch of folks who want to be nice and see nice things happen to other people who are also nice. Niceness abounds!

Check out some of the best wholesome moments from Reddit's /r/WholesomeMemes subreddit, and do your best to pay it forward by putting motivational impact text over a picture of a dog making a funny face or a grandma kissing a baby or whatever other wholesome and nice interaction you snapped a picture of.

They're even better when they're fresh.

I go to the same gas station every day after work for beer and burritos. Today when I asked for my burritos the guy said "they're hot. I knew you'd be here so I made a fresh batch" and that's the most thoughtful sh*t anyone's done for me in awhile. - VictorJ45

We can fix this thing together.

Here is a new #challenge for all you bored teens. Take a photo of an area that needs some cleaning or maintenance, then take a photo after you have done something about it, and post it. - Baxxo25

One thing moms hate? The slapping of moms.

The actual strongman in this picture, Soren Falby, replied to it saying: I'm not gonna slap anyone's mom. I love my mom to death and she would kill me if I ever slapped a woman. - basil78

He's doing his best, and his best is very sweet.

My grandpa who knows nothing about video games but loves me very much and wants to relate to me. - mdahms95

It's good to have one of the nice kids.

Took my six-year-old to a classmate's birthday party today. He was the only kid there. His parents thanked me for bringing him and said he was the only one their son wanted to invite because my son's the only one in school who's nice to him. Teach your kids not to be *assholes. - sandwoman-23

Give the Smurf teacher a raise.

Someone posted the above picture and wrote: Imagine waking up for an 8 AM class and this is what you walk in and see... [facepalm emoji] And this was the response: He got up extra early to make a holiday class a little fun. Be nice and respect what he's doing. - Wholesome08

A fan tweeted at author Neil Gaiman and said: My English teacher says we shouldn't refer to authors by their first names because they aren't our friends. Will you confirm our friendship and let me call you Neil on my "American Gods" book report? To which Neil Gaiman replied: Absolutely. - Substantial_Degree

You just have to ask nicely.

Ever since I was a little kid I've always wanted to get on a fire truck. I'm tempted to just walk my grown *ss over to a first station and ask. A little while later, he posted the above picture and said: omg it worked - Elephant_Eater

The sweetest lie I ever heard of.

[My girlfriend and I] were chilling in my room when she said: "I've just thought of a lie that I tell you sometimes." I paused my game and asked her to go on. "Sometimes," she said. "I say I need a hug from you when actually I think you're the one that needs a hug." She's a keeper. - macko123456

This is a good use of all those gym hours.

These two strong-looking dudes sat outside with a sign that read: Have you felt unsafe on campus? Discriminated against? Threatened? Afraid to walk around campus? We will walk with you. - _james_powers

2400 lucky people got to hear John Williams conduct a program of music on Wednesday night. One who didn't was a security guard stationed in the stairwell leading to the musicians' locker rooms. Seth Low gave her a mini-concert of Star Wars themes, much to her delight. - Peppersworth

Dads can make a world of difference.

My dad and I share the same name. After starting Microsoft, people used to ask him if he was the real Bill Gates. I always hope he says "Yes." I hope he tells them that he's all the things the other one aspires to be. Happy Father's Day to the real Bill Gates. - AristocratesSR

Is it comfortable down there?

So my BOYFRIEND comes home last night absolutely smashed, gets undressed and then just stands there in my room. So I'm like "are you coming to bed?" And he goes "no thank you, I'm sure you're lovely but I have a girlfriend" and goes to sleep on the floor. - BigSpookySpooks

"I mostly just hung out. It was chill."

Deleted my weather app because there's a guy in my office that always tells me anyway and the app never asks me how my weekend was. Shout out Bill, my weekend was awesome man thanks for asking. - brickfire

If that's her husband, then who... is this?! *looks back at an empty chair where a man sat when I turned my back, I swear...*

Today at work I was at drive-thru and the man at the window wanted to pay for the person behind him and he said "tell her I think she's hot" so she pulls up next and I tell her and she rolls her eyes, smiles, and says "that's my husband." - fannypackmcb

My apartment's pest control guy always refers to Richie (my cat) as a "fellow industry professional." Best man on the job. - HaseebM1

I'm sure she'd be proud.

On a thread entitled "Redditors with interesting hobbies — what do you do and why?": I'm a (male) knitter. I took it up in honor of a very good friend who died suddenly on the eve of her 31st birthday because of an aortic aneurysm. She would spend all year knitting scarves and hats for the homeless and needy to give out at Christmas. I inherited all her knitting stuff and kept up the tradition in her honor. - AugustProse

Since I started my new job about a month ago, I noticed one of my co-workers gets treated like an outcast so I made a point to befriend him. Today he came into my office, handed me a gift card, and awkwardly goes "thank you for treating me like a person." B*tch. I might be crying. - maryclaireee7

One thing I know about grandpas: they're always lookin' out for you.

I asked my grandpa if he would model for me for my photo assignment and he said "let me grab my stethoscope and change into better clothes. I want to look good if I'm getting my picture taken by a professional." - dobbyisafreepup

Imagine having the power to make a doctor.

One of my absolute favorite things: After a PhD student finishes their dissertation defense and the committee discusses while the student is outside the room. I love opening the door to bring the student back in and simply saying "Doctor." 17 times and counting. - RealFunnyTalk

Marriage is tight as hell, brah!

Last night my husband was drunk and kissed me and said "You're the hottest girlfriend I've ever had" and I was like "I'm your wife" and he was like "OMG THAT'S AWESOME." - Available_Subject

The girl I babysit has made me watch Wall-E at least 10 times so I assumed it was her favorite movie but today her mom told me that she watches it because she thinks it's my favorite movie. - UltimateProSkilz

You never know the impact you have on other people.

This Indian man and I have an identical commute, but we have never spoken to each other. Like we get on at the same platform spot and everything. I worked from home yesterday and today he jokingly said, "Where were you? I was lonely!" It was a joke but I almost cried. - earlongissor

Kendrick Castillo, who died stopping a school shooter, was not forgotten by his classmates. - Buckysmall

Every Thursday, this little girl gets so excited to stand out on the sidewalk and wave to her favorite trash man. A few weeks back, she decided she wanted to make him a homemade muffin. To her great surprise, it just so happened that the Thursday she picked was his birthday. He said it was the only gift he received. - cowabungapeppermil

Someone's looking out for you, bud.

My son has parked his bike by this lamppost just about every day for the last year. This morning, this sticker had appeared. Absolutely made our day. - TheSecondArK

I could go for a bit o' shawarma right about now...

Is that him? Nah, that's just a beach ball.

Indiana construction worker Jason Haney hid a giant "Where's Waldo" cutout all over his work site for the children in a nearby hospital to find. Once he received word that they'd found him, he moved Waldo to a new location so they could start looking for him again. - DragonMomma420

This good dude is looking out.

My Uber driver was telling me "stop apply lipstick!" and "start lipstick, Miss!" because of holes in the road. Not all heroes wear capes. - Xglossygern

"It does not do to dwell in dreams, and forget to live." - Albus Dumbledore, but also me thinking about my formerly non-gray beard.