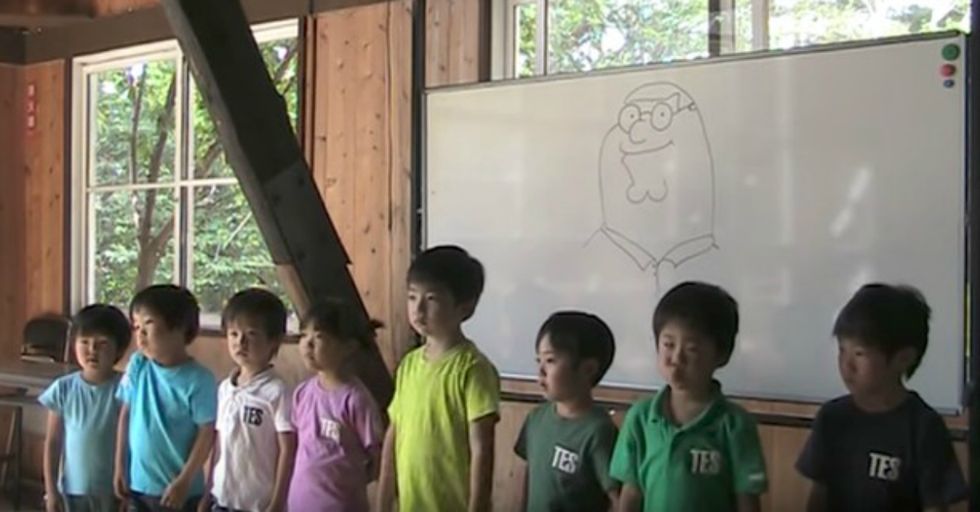 Between the depressing news, awful comments, and videos of spiders, it's easy to find yourself feeling a little sick of the Internet every now and again. But then you find a video like this one, and you remember that the Internet is also home to magical, inexplicable experiences that restore your faith in humanity.

Buckle up for this one. It's a wild ride.

Take a good look at this picture:

It's a still from a video. There are eight Japanese kindergartners standing in front of a whiteboard. And on the whiteboard is a picture of Peter Griffin (the main character from Family Guy). What do you think is going to happen next?

Whatever you guessed is most likely 100 percent incorrect. We now present the most confusingly delightful video that has ever been on the Internet:

The children are singing a song called "DayMan." Here are the lyrics: DayMan (ah ah ah) Fighter of the NightMan (ah ah ah) Champion of the Sun (ah ah ah) You're the master of Karate And Friendship For Everyone!

Now, that video is obviously very cute, but once you learn about where that song came from, you will be even more confused. It's from the definitely-not-for-kids show It's Always Sunny in Philadelphia. Here's a scene featuring two of the show's characters writing the song:

In case you missed it, one of those characters is definitely huffing spray paint from a dirty sock. It gets even better, though.

Here's another clip from that same episode of the song being performed onstage as a big musical number:

The costumes! The singing! The... troll? What is going on here? Here's an even better question: Who watched that episode, heard the song, and decided to teach it to Japanese kindergartners?

Furthermore, what the heck is Peter Griffin doing on that whiteboard?

Before you ask: No, Peter Griffin has nothing to do with that episode of It's Always Sunny. There is no reason for him to be on the whiteboard. But there's no reason for those kids to be singing the DayMan song, either. Japan...are you feeling OK?